Boakyewaa Glover's Circles to be adapted to TV 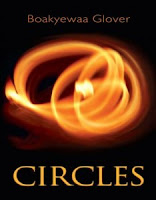 For sometime now most books have been adapted television; Jane Austen's Pride and Prejudice, Sense and Sensibilities and Emma and Charlotte Bronte's Jane Eyre amongst them. Whereas some television adaptation of books have been successful others have not been so. As of now I have not as yet heard of any Ghanaian novel which has been adapted to television, in the form of a series. I might be absolutely wrong, hence if there is any please let me know.
However, this is about to change. I was watching ETV Ghana when I saw the advert calling on people to audition at the ETV premises for the TV adaptation on Boakyewaa Glover's Circles. After a few search I read the announcement on the author's website:

On Sunday, February 6th, I finalized a contract with ETV Ghana to adapt CIRCLES into a TV show. The show will be produced by ETV, scripted by me and will begin airing June 2011. My book is coming to TV, y’all! (Source)

The auditions are set to begin on February 26, 2011. I have not as yet read this novel, launched on 21st May of last year, but if I get to reading it I would let you know. In the mean time, I want to ask you all: Books and TV Series, which one do you love? There is a trailer on her website.
Author: Boakyewaa Glover Author's Country: Ghana Television Adaptation