Showing posts from June, 2014
Show All

Jeane had once said that men were not like women, that once they had possessed a woman it was as thought nothing had happened and they just wanted to move on to another. [64] The difference between living and dying was not one of quality, only of time. [67] Constant shelling is a cure for impure thoughts. I never think of women. They belong to a different existence. [146] Men are such timid creatures, really, You have to be gentle with them. Make them feel safe. To begin with, anyway. [235] They boasted in a mocking way of what they had seen and done; but in their sad faces wrapped in rags he saw the burden of their unwanted knowledge. [270] It's better to have a malign providence than an indifferent one. [278] I heard a voice. There was something beyond me. All my life I had lived on the presumption that there was no existence beyond...flesh, the moment of being alive...then nothing. I had searched in superstition... Rats. But there was nothing. Then I h
2 comments
Read more

292. Testament of the Seasons by Mawuli Adzei 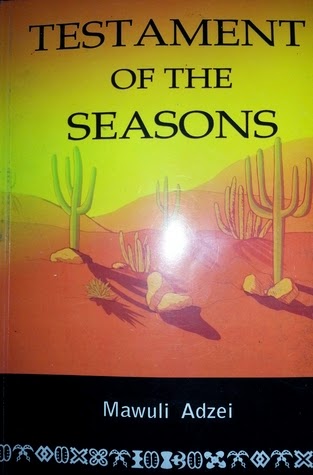 Testament of the Seasons  (2013) is an anthology of poems in fourteen segments by Mawuli Adzei collected over a period of three decades. The poems cover wide ranging issues: from the fall of the Berlin Wall to the bombing of the World Trade Centre; from the Arab Springs to the Cold War and Holocaust; from love to identity and race and death. Mawuli's anthology consist of poems about issues that has affected his world views. He talks about the hegemony of the West as wells as the tribalism at home and his love for his people. Mawuli would not be bolted to a single place; he is  'neither a signifyin' monkey/ Nor a simulating chameleon'.  Yet, he is a member of his clan; their mirror image for if you  just touch my face/ You touch a clan. The anthology opens with  Winds of Change  - a collection of poems about the recent seemingly stochastic uprisings that swept large parts of North Africa and Middle East. The segment opens with  Springtime , a poem about the sudden
Post a Comment
Read more

Explaining My Silence and Reviewing the Month of May

There comes a time when even a hobby suffers from a person's silences and inactivity. Sometimes it becomes pronounced that going back to what we love becomes a tortuous task in itself. I have suffered this, though not to the tortuous end. This year has been like no other year. It has taken me to the extremes of events. I have lost a job and found one. I have known fear and I have been rescued. It is in my moments of desperation that I realise I could not muster the necessary energy to read as many books as I used to read. I discovered that I am not one of those who could lose themselves and seek solace in books when faced with obstacles. In such situations, my mind takes control over me and does its own thinking, unaided, uncontrolled. It is for this reason that my reading in April was highly affected with only two books . I just could not bring myself to read. It is like a writer suffering from a writer's block. May in Review This block entered May. I thought that
Post a Comment
Read more
More posts