Showing posts from September, 2011
Show All

September 30, 2011
Again, like Ola Rotimi's The gods are not to blame , these quotes are more of proverbs than they are of quotes. Proverbs and riddles are traditional ways of speaking in most African countries and a good speaker is one who is able to communicate using the appropriate proverbs to carry out his message. In most cases, an adept speaker would use only proverbs and the listener is expected to grasp the meaning, just like a mathematician would use mathematical symbols to communicate to other mathematicians. In fact, in Ghana, the very word for a gathering, where chiefs or other traditional elders or where something important is about to take place is translated as 'proverb market', (in Twi,  b'adwam or B ε Dwam ). The following proverbs are not exhaustive: Because the man approaches a brand-new bride he forgets the long long faithful mother of his children. When the horse sniffs the stable does he not strain at the bridle? [W]hen the wind blows cold from behind, t
2 comments
Read more

109. Excursions in My Mind by Nana Awere Damoah 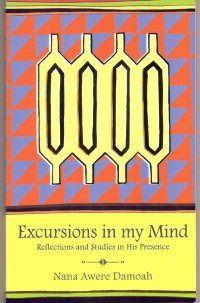 Title: Excursions in My Mind Author: Nana Awere Damoah Publishers: Athena Press Pages: 134 Year of First Publication: 2008 Country: Ghana Read for Amy's BAND Nana Awere Damoah 's book Excursions in my Mind  began that which was continued in Through the Gates of Thought . As in the latter, this book of inspiration used examples from the author's own life and from varied sources; prominent figures and books like the bible were not spared. The book was written in simple language and unlike many other books on motivation and inspiration, here the reader - perhaps the Ghanaian or African reader - could be able to relate quite well with most of the examples cited. Each series - as a chapter is referred to in this 134-page book - begins with a short story or an exposition of the theme or subject matter. The author then goes on to give 'Action Exercise' in an attempt to encouraging the reader implement that which he had read. Most at times this is f
10 comments
Read more

Olufemi Terry's  Stickfighting Days won the 11th Caine Prize for African Writing Award in 2010. It was later included in the anthology A Life in Full  anthology published in 2010. This story first appeared in Chimurenga vol. 12/13. The focus of the Caine Prize is ' on the short story, as reflecting the contemporary development of African story-telling tradition.' Here, one wonders if the 'African story-telling tradition' part deals with what publishers refer to as 'The African Story'. If so, the Caine Prize has succeeded. If the 'development' is also necessary, then it has failed totally; for now, the prize is almost seen as the ultimate search for the story that that can make readers puke and wonder if the characters are savages or humans. Consequently, writers summon all their creative power to write the most scatological stories that would define what an African story is. Whereas some writers search for the most rotten neighbourhoods in any
22 comments
Read more

107. A Grain of Wheat by Ngũgĩ wa Thiongo 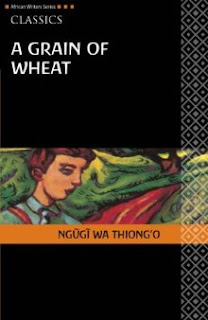 Title: A Grain of Wheat Author: Ngũgĩ wa Thiongo Genre: Fiction/Colonial Literature Publishers: Heinemann (AWS Classics) Pages: 267 Year of First Publication: 1967 Country: Kenya A Grain of Wheat has been noted as Ngũgĩ wa Thiong'o's best novel. It was voted as one of the Best 100 African Books in the Twentieth Century by the Zimbabwe International Book Fair. As the third published novel, A Grain of Wheat embodies distillates from Ngũgĩ's two previous novels: Weep Not Child (1964) and The River Between (1965). In this story, the fight for independence, started in Weep not Child and The River Between converges and hints of elitism, greed, and discrimination against the independence fighters that blossomed into the novel Matigari had just begun.  Mugo wa Kibiro's prophecy (in TRB) that 'there shall come a people with clothes like butterflies' had come to pass and Waiyaki - the protagonist in TRB - is reported to have been 'buried aliv
4 comments
Read more

September 26, 2011
Proverb: Kookoohene se ɔsene wo a, ɔsene wo wɔ kookoobere, na ɔnsene wo fupεberε Meaning: If the cocoa chief says he he greater than you, he is greater than you in the cocoa season, but he is not greater than you in the off-season. Context: Cocoa is a seasonal crop and brings in money twice a year. At those times farmers can afford extravagance. In the off-season they may be poor. Fupεberε is the season between the rainy and dry seasons. Hence: Your position depends on achievements over the years, not on "quick come, quick go" money. No. 3505 in Bu me Bε by Peggy Appiah et al.
6 comments
Read more 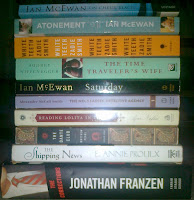 Geosi shared with me his new source of used books. Not that I didn't know this place but I associated them with text books and genre-fiction. When I was in school I visited them for some of my text books. However, recently they have taken delivery of fiction, literary fiction and Geosi found himself a lot of gems. I went there too and got myself some really interesting books. And the big 'thing' is that the books are cheap. Very cheap. A buck each. I went there with the high-book-cost mentality and came with a truckload of books: Atonement by Ian McEwan . This 2001 Booker shortlist book is on my Top 100 books reading challenge . I haven't read any book by this acclaimed British author. Not yet. On Chesil Beach by Ian McEwan . This is also on my Top 100 books reading challenge . By this effort and others, I definitely am on my way to fulfilling at least 50 percent of this challenge, not this year but by 2012. On Chesil Beach was also shortlisted for the 2007 Bo
8 comments
Read more

Namwali Serpell's Muzungu , her first published story, was shortlisted for the 11th Caine Prize for African Writing in 2010 . The story was first published in the African Diaspora journal Callaloo and later selected and published in The Best American Short Stories 2009. I is also one of the stories in the Caine Prize Anthology, A Life in Full and other stories . Muzungu  tells the story of a young precocious girl, Isabella (or Isa), and her relationships with the people and things around her. Isa is the daughter of expatriate parents and, at age nine, has come to understand what being white meant. She is also an intelligent girl who prefers having conversations with adults to children and who thinks Athena is better Aphrodite. She loves fractions too. However, this characteristic was expertly handled so that any hints of Einsteinian traits were avoided. For instance, when she follows Chanda to the servants' quarters and is called muzungu  by one servants' relatives,
6 comments
Read more

September 23, 2011
What Karanja feared more than the rumours was their possible confirmation. As long as he did not know the truth, he could interpret the story in the only way that gave him hope: the coming of black rule would not mean, could never mean the end of white power. (P. 42) God helps those who help themselves, it is said, with fingers pointing at a self-made man who has attained wealth and position, forgetting that thousands of others labour and starve, day in, day out, without ever improving their material lot. (P. 63) Party leaders from the district were the first to speak. They said Jomo Kenyatta had to be released to lead Kenya to Uhuru. People would not accept any other person for the Chief Minister. They asked everyone to vote for party candidates in the coming elections: a vote for the candidate was a vote for Kenyatta. A vote for Kenyatta was a vote for the Party. A vote for the Party was a vote for the Movement. A vote for the Movement was a vote for the People. Kenyatta was
7 comments
Read more 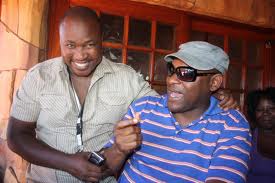 As most of you know, I have almost solely handled this blog. All articles, reviews, interviews and others have been from me. This is my first Guest Post. Rahpael Mokoena is a book critic and a South African and wants to introduce to us the 'intriguing African writer', Omosoye Bolaji, a writer from Nigeria. This is more like a South-West connection. _________________________ By Raphael Mokoena Omoseye Bolaji (right) with  Pule Lechesa Omoseye Bolaji, the South African based versatile Nigerian writer, is an intriguing wordsmith. He often baffles readers and critics. Is he a “serious, committed” African writer, or otherwise? What is his literary legacy? Why is he often dubbed a “grassroots oriented” writer? Yet, many serious literary critics and commentators take him (Omoseye Bolaji) serious; to the extent that over half a dozen different studies (books) have been published about his literary work. The academics of the rather conservative University of the Free
48 comments
Read more

105. Neo-Colonialism the Last Stage of Imperialism by Kwame Nkrumah 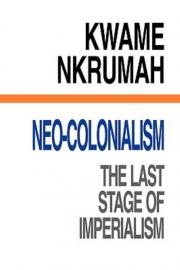 Title: Neo-Colonialism, the Last Stage of Imperialism Author: Kwame Nkrumah Genre: Political Non-Fiction Publishers: PANAF Pages: 283 Year of Publication: 1965 Country: Ghana Read for Amy's Bloggers' Alliance of Non-Fiction Devotees, BAND CAVEAT: This review has been delayed for several reasons. First it is to afford the reader enough time to think about the subject matter deeply and present it lucidly. However, after several days, it became clear that no amount of thinking would lead to a clearer review. Thus, to understand the wealth of facts and figures, of information within this pages, kindly get a copy. What is presented here cannot even be described as a pin-prick of what the book offers. The second reason is that today is Kwame Nkrumah's birthday. He would have been 102 years. When Kwame Nkrumah published this book in 1965, it was banned in the United States. A year after, on February 24, 1966, he was overthrown in a coup d'tat, which ac
5 comments
Read more

Ken Barris's The Life of Worm was shortlisted for the 11th Caine Prize for African Writing, 2010 . The story was first published in New Writings from Africa Anthology published by Johnson and King James Book, Cape Town. This story, like all the shortlisted stories, are part of the A Life in Full Anthology published in 2010. The Life of a Worm is a story about a man and his dog, Worm. The man lives behind a series of metal doors, motion sensors and several electronic security protection. He is also protected by Worm, a ferocious dog he struggles to handle on their daily outings. When people approach them, praising the dog, the man becomes scared, afraid that the dog would tear off intruder's face. From his internal conversation, we see that the man is unable to control his dog. He is also afraid of something: armed-burglars? He is needs this protection and this makes him unable to sleep properly, always checking on his security detail. With alarms going off randomly, h
8 comments
Read more

September 16, 2011
Capitalism contains many paradoxes, all of them based in the concept of commodity production: the few rich and the many poor; poverty and hunger amid superabundance; 'freedom from hunger' campaigns and subsidies for restriction of crop output. But perhaps the most ludicrous is the constant traffic in the same kinds of goods, products and commodities between countries. Everyone is busy, as it were, taking in other's washing. This is not done out of need, but out of the compulsion of profit-making and monopoly extension. The European Common Market has become the apotheosis of this process, as well as the dumping ground of international investment, dominated by the giant American banking concerns and their British satellites. Present-day monopoly is highly variegated and spread out. While it draws its strength from its monopolistic position, it is on the other hand seriously exposed to the dangers that face a multiple organism that stretches its limbs to extremity in diff
4 comments
Read more
More posts