Waiting (2008) is the winning  story on the 10th Caine Prize for African Writing, 2009. This story was published at Guernica.

Written in the first person, Orlando Zaki writes about his life in a refugee camp. Orlando is amongst a group of young people in a refugee camp. According to him, most of the people at this camp got their names from the inscriptions on the shirts they receive from the Red Cross

Orlando is taken from Orlando, Florida, which is what is written on the t-shirt  given to me by the Red Cross. Zaki is the name of the town where I was found and from which I was brought to this refugee camp. My friends in the camp are known by the inscriptions on their t-shirts.

In general, life at the camp is lived according to the theory of 'only the fittest survive'. There is struggle for water and food, that is when they become available. For the most part they live in wait of these basic facilities and also in expectation of being adopted and sent to abroad. The story borders on being a catalogue of scatology with 'shit' bandied here and there. And such was the visual presentation of this filthiness that one could go without food for days after reading this filth-packed paragraph.

There were a lot of black dogs. They were our friends, they were our protectors. Even though food was scarce, the dogs never went hungry. The women would call them whenever a child squatted down to shit and the dogs would come running. They would wait for the child to finish and lick child's buttocks clean before they ate the shit.

Later on, when food became scarce, the dogs were killed and eaten as food. And must the dogs be black? Or what is the symbolic significance of a black dog? This is a clear example of what has become the African stories and the very ones that are noted and awarded. In the end, as the writer stopped narrating his story, all that has been covered were the desolate lives of a group of young people in a refugee camp whose only hope of survival is to be adopted. And this is the very stories that almost always put me off from my objective of reading African stories and promoting them.

Per this story, and if this theme pervades Osondu's new short story anthology Voice of America, then I think I would pass on that one. This is not a matter of writing the so-called positive stories about Africa, but about writing stories not for the popularity of the themes. It is about writing because you have something else to say. How can there be a representative story if all that is said are on the extreme left.As it stands now, such themes have become crowded and I have read a lot of them to last me a generation.
_______________________ 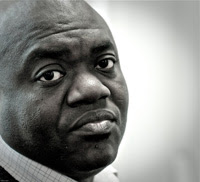 Brief Bio: was born in Nigeria, where he worked for many years as an advertising copywriter. He won the Caine Prize for African Writing in 2009. His book of stories Voice of America is due from HarperCollins in November, and his novel This House Is Not For Sale is due from HarperCollins in 2012. His short stories have appeared in The Atlantic, Guernica, AGNI, and many other magazines. With William Pierce, he coedited The AGNI Portfolio of African Fiction. He holds an MFA in Creative Writing from Syracuse University, where he was a Syracuse University Fellow. He is assistant professor of English at Providence College in Providence, Rhode Island. (Continue reading) The story could be read at the Guernica site here and its pdf version could be downloaded from the Caine Prize for African Writing site.