Showing posts from August, 2009
Show All

An Interview with Author Martin Egblewogbe

Martin is the Author of "Mr Happy and the Hammer of God", which is a collection of short stories. He is also coordinating the Talk Party, a poetry reading at Nubuke Foundation located at East Legon, and also presently working on the Ghana Poetry Project. Martin is a man of many parts and has been able to fuse all these parts into the arts, for it is in art alone where one can dump all his diverse talents. This is my first interview and I am glad that it was with Martin. Martin keeps a website kpokplomaja where a lot of issues ranging from articles, essays, poetry, books are discussed. #1: Can you tell us something about yourself, your background both in literature and outside of it? OK. I live in Accra, my hobbies are still photography and collecting coffee mugs; I am interested in astronomy; I love to be engaged by philosophy; I write poetry and short stories, I am involved in advocacy for Ghanaian writing -- that's how come I'm involved with the Ghana
4 comments
Read more

13. Zeroing in on Mr. Happy and the Hammer of God 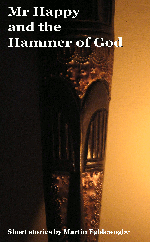 Title: Mr. Happy and the Hammer of God* Author: Martin Egblewogbe Genre: Novel Publishers: Self Publication (Printed in Ghana) Pages: 126 Year: 2008 Country: Ghana Mr. Happy and the Hammer of God is a collection of short stories by Martin Egblewogbe. Written in different narrative styles ranging from an omniscient narrator to a first person narrator, the stories describe everyday affairs of life such as adultery, abortion, and unusual events such as ones thoughts or musings at the point of death, the life of a neurotic and a psychotic and man's place in the universe. If the title seems surreal, the stories are no less. The collection is divided into two parts. The first part consists of seven stories and the second part consist of three.  "Pharmaceutical Intervention" tells of the guilt and mental suffering of a young girl who aborted a pregnancy in order to save face in the society. "Down Wind" is about a man who has committed a crime but do
3 comments
Read more

12. Hanging Out with Big Bishop Roko and the Altar Gangsters

Title: Big Bishop Roko and the Altar Gangsters Author: Kojo Laing Genre: Novel (Sci-Fi?) Publishers: Woeli Publishing Services Pages: 366 Year: 2006 Country: Ghana Set in the 'weird' year of 1986 in Gold Coast City, Big Bishop Roko and the Altar Gangsters is a novel that borders on Science Fiction with Gothic representations. It tells the story of an Anglican bishop (Bishop Roko) who is deeply involved in genetic engineering with shark sperms with the ultimate aim of causing a general mutation of the human race to "free all the truths locked up in the different cultures, to free all the divinity locked up in different religions, and to free and learn from the most complex ethical beings of the universe. ..." However, the Pope and the Archbishop of Canterbury are both against but are unable to prevent this from happening. The Archbishop's outfit was even carrying out a different research but one that would lead to the mutation of the rich folks first and
Post a Comment
Read more

August 24, 2009
On Tuesday June 16, 2009, in the 17944 issue of the Daily Graphic, a list of Africa's top 10 'old men' was published. This followed the demise of the longest serving African president, President Omar Bongo of Gabon, who had, until his (un)fortunate demise, been in power for 42 years. Already, I have discussed the issue of ' Dynasty-sation of Africa's Autocracies and Democracies ' on this blog. So whilst waiting for another book review (the book I am currently reading is so surreal that I just don't know how to review it), I decided to reproduce this list whilst adding few details to them. 10. President Zine El-Abidine Ben Ali of Tunisia (21 years) : He was born on 3rd September 1936 and has been in power since 7th November 1987. He was appointed Prime Minister by President Habib Bourguiba on October 1, 1987. However, after being in power for 5 weeks he had the President declared unfit for the duties of the office and assumed the position of a president in
8 comments
Read more

Title: Fragments: Author: Ayi Kwei Armah Publishers: Per Ankh Genre: Novel Pages: 286 Year: 1969 (this edition 2006) Works of art are intended to inform, educate, elucidate, portray, uncover, and/or challenge a society's way of doing things. It can even go ahead to propose newer ways of doing things and stir a revolution. Any work of art could perform any of these functions. However, Ayi Kwei Armah's works have consistently challenged our collective actions and thoughts as a society. In Two Thousand Seasons , he clearly demonstrated his displeasure by showing clearly our complicity in the enslavement of ourselves coming from our greed and our diametrically opposed stance to 'the way'. In that novel he referred us as Ostentatious Cripples, and those who went into the service of the White Predators as Askaris or Zombies. In Fragments, Ayi Kwei Armah once again tackles the mindset of a society. A society that has lost its focus in life; one that consistentl
9 comments
Read more

Title: Unexpected Joy At Dawn Author: Alex Agyei-Agyiri Genre: Novel Publisher: Sub-Saharan Publishers Pages: 331 Year: 2004 Country: Ghana Unexpected Joy at Dawn is a story of two siblings, Nii and Mama Orojo, during the 1983 deportation of Ghanaians from Nigeria under the Shehu Shagari government. Nii, who is a Nigerian by blood but a Ghanaian by birth, was left in Ghana by his parents as they made the tortuous journey to Nigeria when Ghana enacted the Aliens Compliance Order of 1969, which made every person living in Ghana without the required papers an alien. His name was changed to reflect the name of his adopted parents. After fourteen years of living in hardship in Ghana, which involves living in slums even though he was an Assistant Manager at a bank, taking on multiple jobs, not being able to bury a wife and being chased around by market women for purported 'fraud', he decided to go to Nigeria in search of his roots. Besides, he entertained the fears of being
77 comments
Read more

Title: Two Thousand Seasons Author: Ayi Kwei Armah Genre: Novel Publisher: Per Ankh Pages: 317 ISBN: 2-911928-03-2 Year: 1973 (this edition 2000) Country: Ghana Two Thousand Seasons is Ayi Kwei Armah's bold attempt at recreating the 'lost' history of Africa. It starts from before the beginning where Africans were following The Way and ends at the point where Africans were or are fighting slavery, yet it does not end there at all. This is a story that shreds long-held belief systems into tatters. Institutions and what had always been referred to, wrongly though according Armah's Narrative, as Tradition - such as the Chieftaincy institution and the inequality against women - do not stand up to Armah's critical observation and construct. In Armah's novel women are held esteem and were the ones who planned and executed the fall of the Arab invasion and also fought side by side with men, and in some situations surpassed them, both in numbers and in
12 comments
Read more

August 10, 2009
To mark the beginning of the 21st Century, and encouraged by Professor Ali Mazrui , the Zimbabwe International Book Fair (ZIBF) launched the international compilation of "Africa's 100 Best Books." Nominations were sought throughout the African continent and internationally. A comprehensive list of all nominations was published by ZIBF. Definition of an African: Only books written by Africans were eligible. After extensive discussion and debate the ZIBF for the purpose of the project defined an African as: " someone either born in Africa or who became a citizen of an African country." Nominations were made on the basis that the book has had a powerful, important or affecting influence on the nominator, as an individual, or on society. The List for Creative Writing (in alphabetical Order) 1. Abnudi, Abd al-Rahman (Egypt)--al-Mawt 'ala al-asfalt 2. Achebe, Chinua (Nigeria)--Arrow of God 3. Achebe, Chinua (Nigeria)--Things Fall Apart 4. Aidoo, Ama Atta (Ghan
9 comments
Read more

The ICC, Bush, Blair, Botha and African Leaders--What You Should Know

August 07, 2009
I am someone who is passionate about the sufferance of a people or an individual and no matter how dire the circumstances may be or how much it may cost, I believe that human lives must be saved. Thus, saving lives should first our actions and be second to none. Hence, it is only with happiness and glad in my heart when the International Criminal Court was established in The Hague. I was even more glad when Ghana ratified the bill establishing this court implying that whoever commits human atrocities, wherever in the world, and finds his/her way into the country, Ghana has the obligation to arrest this individual and hand him over to the ICC to be trialed. What a philosophy! What a way to prevent rogues and arrogant people from snatching lives from people and fleeing from their actions with impunity. I was even more glad when Professor Kunyehia , a Ghanaian female lawyer, was called up to be one of the court's first prosecutors. However, just after Ghana ratified this bill, afte
6 comments
Read more

8. Half of a Yellow Sun by Chimamanda Ngozi Adichie 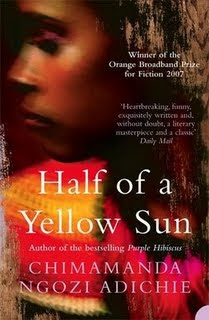 Title: Half of a Yellow Sun Author: Chimamanda Ngozi Adichie Genre: Novel Publisher: Fafarina Pages: 435 ISBN: 978-073-149-x Year: 2006 Half of a Yellow is the second of Adichie's books. The story presents the struggles, the heartbreaks, the loss, the unity, the hopes and disappointments of a family and a people during the Biafran war of 1967-1970. Olanna and her sister Kainene had just arrived in Nigeria after their academic sojourn in the United Kingdom with great expectations: one to join her 'revolutionary lover' and become a lecturer at the university and the other to takeover the family business, respectively. However, just before they could settle down and realise their dreams, the coup that would start a series of massacres and later lead to secession and its concomitant warfare, occurred. The overthrow of the Hausa government by the Igbo-led military resulted in dissension amongst the Hausa population of the military. This is because there was
8 comments
Read more

The Drunk Chromosomes of a Drunk...(From the Manuscript, BLACK PATHOLOGY)

August 03, 2009
On the fertile foopath to the weedy farm he fell... (Sun and Moon at a twilight reunion) ...and died not ...and the conceived son from the drunk communion was not a toad-cow... The mirror reflects the contents of the mind... The soul harbours the deeds of the body... The crab surely begets a crab You sow what you reaped the farming season before... Then he saw no heavens ...but a vast emptiness He felt his feet suspend in space the Lotus-Eater cum Palm-Wine Gulper He sang songs of lamentations beneath the palm-wine seller's shed He tossed turned ...tossed Balanced himself Fell Broke his neck His son has a bottle in his back pocket a stoic man to succeed his father ...and he has his father's Drunk Chromosomes He is his father moulted into prime youthfulness to continue plying his trade and be the gods' embodiment of advice copyright 2005 by Nana Fredua-Agyeman Click HERE to read comments of this post on facebook
6 comments
Read more
More posts