66. Cry, the Beloved Country by Alan Paton, A Review 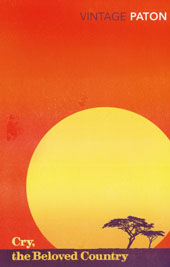 Alan Paton's famous work, Cry, the Beloved Country, address interracial prejudices that existed during pre-apartheid South Africa. Though the novel was published in the very year the National Party instituted apartheid, it tells of the problems which existed before apartheid. It could be taken as the 'events' that led to the institution of apartheid.

In this novel we follow Stephen Kumalo whose brother (John Kumalo), sister (Gertrude) and son (Absalom Kumalo) had all left their home village of Ndotsheni to Johannesburg in search of employment. Earlier he had received a letter concerning the negative ways Gertrude had fallen into: brewing local alcohol and prostituting. Soon this simple search for a sister turns into a complex labyrinthine search for a son. In the big city of Johannesburg, Absalom had morphed from a country boy into a criminal whose quest for survival had led him into committing several crimes including armed robbery and violence. During one of such robberies, after he had been released from the Reformatory school, he, unintentionally, shot and killed Arthur Jarvis, a speaker, fighter and believer of equal rights. On the issue of education and the issue of what is permissible and what is not, Arthur writes

It was permissible to leave native education to those who wanted to develop it. It was permissible to doubt its benefits. But is no longer permissible in the light of what we know. Partly because it made possible industrial development, and partly because it happened in spite of us, there is now a large urbanized native population. Now society has always, for reasons of self-interest if for no other, educated its children so that they grow up law-abiding, with socialized aims and purposes. There is no other way it can be done. Yet we continue to leave the education of our native urban society to those few Europeans who feel strongly about it, and to deny opportunities and money for its expansion. That is not permissible. For reasons of self-interest alone, it is dangerous. (Page 126/127)

Paton's argument is a humanistic one and through articles and letters, he shows how important it was for the natives (black South Africans) and the general population when the former receives education. Yet, there were those who were afraid of having educated natives amongst them.

Some say the that the earth has bounty enough for all, and that more for one does not mean less for another, that the advance of one does not mean the decline of another. They say that poor-paid labour means a poor nation, and that better-paid labour means greater markets and greater scope for industry and manufacture. And others say that this is a danger, for better-paid labour will not only buy more but will also read more, think more, ask more, and will not be content to be fore ever voiceless and inferior. (Page 71)

The novel shows the negative effects of a society whose resources are unequally distributed; it shows what happens when one group of individuals is strategically prevented from accessing certain basic facilities like freedom and education. There is also the internal struggle and conflicting opinions. The title, Cry, the Beloved Country, is itself filled with conflict and struggle. For this country is a 'beloved' one yet the author refrained from using the possessive 'my' to show a closer affinity but rather chose to use the impersonal definite article 'the', as if in a way distancing himself from the negative fallouts of what is happening.

The story is poetically written. There are no inverted commas (" " or ' ') to mark direct speeches - they are marked by dashes (-), which slowed the reading for me but never intruded upon its appreciation. In fact the slow reading impressed the story into my thought. Touching on the author's poetic sensibilities, one can quote one of the three passages in which the title was taken from

There is not much talking now. A silence falls upon them all. This is no time to talk of hedges and fields, or the beauties of any country. Sadness and fear and hate, how they well up in the heart and mind, whenever one opens the pages of these messengers of doom. Cry for the broken tribe, for the law and the custom that is gone. Aye, and cry aloud for the man who is dead, for the woman and children bereaved. Cry, the beloved country, these things are not yet at an end. The sun pours down on the earth, on the lovely land that man cannot enjoy. He knows only the fear of his heart. (Page 67)

And such beautiful poetic lines are scattered in this novel. Though the novel exposes the immorality that has gripped the society, the dual economies that were coming up as a direct result of strategic discrimination, it also portends hope, that the sun would pour down on the earth. The village of Ndotsheni, where the Kumalos came from, was perhaps created as a metaphor or symbol for the life of natives. For the land was unproductive and desolate. Nothing was done to save it and it was gradually being eaten up until Arthur's father, Mr Jarvis, read his son's articles and realised how a part of the general problem he was; how his own actions contributed in an indirect way to his son's death for he himself had acquired huge hectares of land in Ndotsheni and through his actions the land has become desolate and unproductive leading the young Absalom seeking better livelihood elsewhere, leading to the death of his son, Arthur, who had also gone to work in Johannesburg. However, the metaphor is more revealing from the following passage:

Ndotsheni is still in darkness, but the light will come there also. For it is dawn that has come, as it has come for a thousand centuries, never failing. But when that dawn will come, of our emancipation, from the fear of bondage and the bondage of fear, why, that is a secret. (Page 236)

Thus, we are hopeful that as long as dawns come, emancipation would also come.

This is an excellent novel written with love at its centre, with understanding and appreciation of life. It also shows that no one is far from being evil for there were bad whites as much as there were bad blacks. Besides, as Kumalo journeyed into Johannesburg he met benevolent individuals, both black and white, such as Rev Msimangu, who gave Kumalo his life's saving, and the white lawyer who took the case as a pro Deo.

Note that because Kumalo from whose point of view a larger portion of the story was told, is a Reverend and because of Paton's Christian upbringing, there are several biblical references. This does not affect the reading as the novel is not a moral critique novel but one that sought equality through a humanist interventions.
____________________________________________________
Brief Bio: Alan Paton (Jan 11, 1903 - April 12, 1988) was born in Pietermaritzburg (currently Kwa-Zulu Natal Province). He attended Maritzburg College and Natal University College, passing out with a degree in Physics. He taught at the Ixopo High School for Whites Students. In 1953, he formed the Liberal Party Party but was banned by the introduction of Prohibition of Political Interference Bill in 1968.