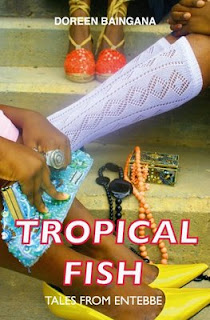 Tropical Fish is a collection of eight linked short stories about three sisters - Patti, Rosa, and Christine - as they journey through life in the town of Enttebe, Uganda. With the exception of Lost in Los Angeles, all eight stories are set in Uganda and they all deal with the choices they made and where it led them. Even though the story was set in the period after Idi Amin's misrule and the deterioration that was imposing itself on the country, politics was never the object, except in some places where references are made to it such as when an ex all-European school was left to deteriorate and the Seventy-two hours ultimatum given to the Indians in Uganda to leave. However, HIV/AIDS which took over the country after Amin's exit was a major theme and was the theme in one of the stories - and my favourite of the collection - A Thank-You Note.

A Thank You Note is an epistolary short story from Rosa to his boyfriend telling him how she is faring with the disease and whether he was also doing well. Through this story we learn of how the disease is contracted, spread and how people intentionally and unintentionally pass it on. The letter also shows the ignorance of the people on the disease, referring to it as a slim disease due to the eating away of the muscles and flesh of sufferers. In this reflective epistle Rosa shows how fast the disease could spread by showing the promiscuity linkage, as one boy contracts it from his 'Sugar Mummy' (a rich and usually older woman who befriends a young man for sexual gratification) and gives it to his girlfriend, who also passes it on when she cheats on him and on and on it goes and ends in death. This story would be much appreciated if the devastation the disease caused is known to readers. Whole villages were wiped off as if it had just emerged from wars leaving infected children and their grandparents.

The story begins with Green Stones as the youngest of the three daughters admires her mother's jewellery purchased by her husband anytime he arrives from his numerous travels. However, Taata, as the father was called, was to die from drinking. We weren't told why he began drinking; but the excessive imbibing of liquor led to his dismissal from work and finally to his death so that the children became the burden of their mother, Maama. The stories in this anthology seem to be a casual collection of everyday life written to preserve a memory. They flutter across the mind as one flips through the pages.

The title story Tropical Fish is the story of Christine, before she left for the US, and her newly found boyfriend, Peter, an expatriate who exports tropical fish. The story is about the 'high-risk' teenage life of sex, drinking, and abortion. Peter and Christine met and dated almost instantly. They started having sex in Peter's huge white house located in a plush hill top residential area. Christine got pregnant but would not tell Peter because he might think she wants his money.

The stories are narrated by the girls or from their point of view and in each story one of the three girls is the main character even though the others might be present. Through the stories we follow the girls as they go through secondary school and suffer hunger in Hunger, with one contracting AIDS (in A Thank-You Note) and falling off and others travel outside the country (in Lost in Los Angeles) only to return to a civil service that is non-existent (in Questions of Home). The girls' story is an archetypal story of teenagers: men, love letters, secondary school, sex, and others. Christine, the youngest is a carefree, easy-going but an independent fellow with the marriage-is-not-necessary trait, which has become idiosyncratic to many of the latest portrayal of 'independent, carrier-focused' women in recent novels. Maama, a 'traditional mother' who is bent on her old ways wants Christine to marry. But she wouldn't hear any of this threatening to leave home if she persisted. Yet, sex had been and was part of her life; including having it with total strangers when she was in Los Angeles. Patti, the eldest, was a born-again Christian who sees the frivolous life of her sister as a sin. She lived and tended her mother and their vegetable garden. Rosa was the middle daughter whose loose life in secondary school led her to contract AIDS. Though her death was not recorded in any of the stories, it was referred to by Christine when her mother asked her to marry.

One feature of this collection, which I loved, was the use of the local words. Though I did not understand any of them, and for some of them the definition was provided right after the word, it never worried me or my understanding. This deliberate use of local words always give local flavour to such novels. It makes the country folks of the writer feel a part of the story; that it was written with them in mind. However, I don't see it as a substitute for audience targeting. Like I said, I enjoyed it and know that there are others out there who would do same.
________________________________________
Green Stones
Hunger
First Kiss
Passion
A Thank-You Note
Tropical Fish
Lost in Los Angeles
Questions of Home


Brief Bio: Doreen Baingana grew up in Entebbe, Uganda, and now divides her time between Uganda and the United States. Her collection, Tropical Fish: Stories out of Entebbe, a collection of linked short stories that explore the coming of age of three African sisters, won the Commonwealth Prize for First Book, Africa Region, 2006 and was a finalist for the Hurston-Wright Prize for Debut Fiction in 2006. (Source)
Anthology Author: Doreen Baingana Author's Country: Uganda Rating: 5.0 Review Short Stories Year of Publication: 2001-2010