February 21, 2011
VIDA, a Women Literary Organisation which was founded in August 2009 "to address the need for female writers of literature to engage in conversations regarding the critical reception of women’s creative writing in our current culture" has conducted a fascinating research into the gender distribution of book reviews and articles. Their findings have generated a wave of discussion on the gender biasness in literary circles or the less emphasis placed on women writings. Available statistics from big publishing houses such as Atlantic, Boston Review, Granta, London Review of Books, Harper, New Republic, New Yorker, New York Times Book Review, New York Review of Books, according to VIDA, show skewness in representation against women, even though "women write and women read". 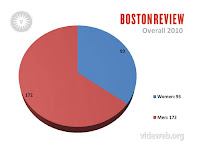 Some responses even suggests that since women form a larger percentage of the reading public there should be a greater representation of women in these studies. The question therefore is why this skewness then? Why are women under represented. It cannot be because men write more than women neither can it be because men read more than women. And on the side of the quality of the write, I cannot argue for or against it for I have read beautiful novels from both sexes. What then is the cause? Below are a few of the graphs (in pie chart format) showing the figures. 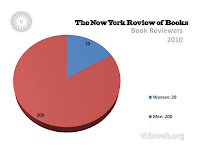 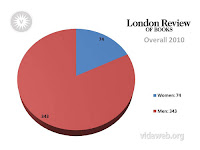 But is there really a deliberate attempt by these reviewers or media outlets to suppress women writing? Could this really be the case? Arguments of this nature would rage as long as there are divisions and groupings in this world. For instance, Africans do question the representation of their literary outputs whenever discussions of world literature is mentioned. In fact, since the institution of the Nobel Prize in Literature Africa's representation could be counted on one's single hand. And it is still a wonder why Chinua Achebe, the author of Things Fall Apart, No Longer at Ease and Arrow of God, these three commonly referred to as the Africa Trilogy, has not won the award yet. But this is a discussion for another time.

I don't want to believe that there is a deliberate attempt to highlight only men literature or, alternatively, suppress women writings. As a book blogger I don't choose a book based on gender. Gender has never influenced the kind of books I read and or review on my blog. I choose a book which is either on my challenge list, have been recommended by a fellow blogger or reader or one which would interest me. On no occasion has gender played a role in determining the books I read. However, a brief look at my gender ratio since I began reviewing books on this blog would lend credence to VIDA's findings. Am I then a sexist by nature, unconsciously?

In 2009, I read and reviewed a total of 27 novels and 8 of these were women, as shown in the diagram below.
Strangely enough, the ratio was the same in 2010. Though I read 30 books in 2010, three of which were short story anthologies from various writers and were thus not included in any of the sex.
However, in 2011, there is an almost equal number of female and male authored books. Again, I have not set out to equilibrate the skewed distribution.
Besides, since I started interviewing authors on this blog, I have interviewed more women writers than men as shown in the figure below.

Thus, is there really a motive behind VIDA's findings? What do you, as a book blogger, look for or what influences your choice of books to review? Do you plan to balance the sexes? Do you read what comes to you? What does your own statistics look like?
Article: Literary Blogging