64. A Woman Alone by Bessie Head 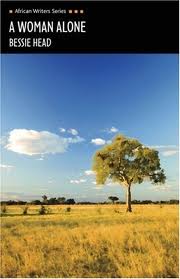 The first section of the book deals with stories concerning her birth and letters and essays on her early life in South Africa. According to Head, she was born in a mental home where her mother was consigned to until she died, because her family could accept the disgrace of a white woman from a respected family being impregnated by a black native South African in a period where inter-racial marriages were illegal. Thus, from the first day Bessie Amelia Emery drew in her first breath she was delinked from all familial contacts, becoming a loner - something she mentioned many times in her writings. Growing up in foster homes and mission houses, Bessie was later to work as a primary school teacher. She however quit and became a journalist. It was during this period that she became involved in the struggles against the apartheid government. Later, she was to leave the country to Botswana on an exit permit with the implication that she would never be allowed to re-enter the country of her birth, thus further alienating an already lonely woman.

The Botswana government denied her of her initial citizenship request, granting it later. Most of Bessie's stories are set in Botswana, specifically Serowe, the village she settled at. She was barely surviving and at this time she had a son. She told of how she struggled with the local people in order to survive, how pitiful the people were. She also talked about how and why the British did not colonise Botswana but took it as a protectorate because the seemingly drought-stricken country with no known mineral resources (at the time) served as a passage into Zimbabwe and other colonised nations. Her first story was When Rain Clouds Gather, followed by Maru and then A Question of Power. She began experiencing nervous breakdowns, moving in and out of mental homes.

As a writer Bessie was a keen observer and even though she was brought up a Christian she left that religion long before it got hold on her mind. In 'God and the Underdog', Bessie questioned the relationship that exists between man and God, highlighting on her beliefs. Does the good God dislike all the bad things in this world? Is that why he has neglected black people?

After obtaining her Batswana passport she began travelling and meeting other writers of renown, speaking at conferences and more. A Woman Alone also contains notes on some of her stories and how they came to be written. Though Bessie loved her adopted home, she never forgot South Africa, even feeling in her heart that their (South Africa's) Pharaoh had already being born, perhaps referring to Mandela.

I feel in my heart that our Pharaoh has already been born. It may be that I shall not live to see Pharaoh's day but I want all those who now live in anguish to be comforted. For one day, due to the length of his roots and the depth of his wisdom, all nations shall dwell under his shadow. (Page 71)


Brief Bio: Bessie Amelia Head (1937-1986) never knew her real parents — an unstable white woman and an unknown black man. She was born and raised in apartheid South Africa. There she suffered from poverty, racial segregation, and gender discrimination. She also had to worry about her own "delicate nervous balance".

As a young woman she left South Africa to come to Botswana. She lived the rest of her life in this country, mostly in Serowe. Bit by bit she overcame her many formidable obstacles. One of her passions was letter-writing; she corresponded with hundreds of people from many countries during her life. At the end she was a famous writer known all around the world. Bessie died of hepatitis after a period of heavy drinking in April 1986 in Serowe at the age of 49. (Source: Thuto; Wikipedia)
ImageNations Rating: 4.5 out of 6.0
Author: Bessie Head Author's Country: Botswana Non-Fiction Rating: 4.5 Review Year of Publication: 1981-1990