February 16, 2011
Every other Sunday, a group of dedicated poets, spoken word artistes, inspired musicians, instrument players and lovers of the art meet at Nubuke Foundation to participate in a program dubbed the Ehalakasa TalkParty. This biweekly music-poetry-performance show, organised by the Writers Project of Ghana and GGG Channels, has come to define the art scene of Accra. Here we seek not perfection but expression for as our motto goes it lives in us. We believe that every person has art in him which need to harnessed.
Our first meeting for the new year, February 13, 2011, saw performers and artistes of varied background coming to either perform or listen.
Nubuke Foundation & Kofi 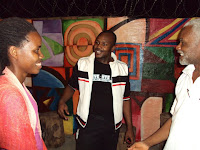 The backdrop acrylic-on-canvass was done by the owner of Nubuke Foundation, Ghana's famous artist who works in several media, Kofi Setordji. Kofi (right with grey hair talking to Naa as Kyekyeku similes on), as he wants to be called by all irrespective of age, is affable and kind and through this act of kindness has given us this space and the equipment to use for our programs. As we say at each program free is not cheap. 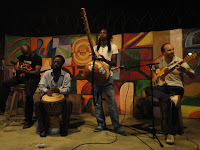 The picture on the left shows Kyekyeku on guitar, DK on drums, Shaka on his Djembe, and a participant, who was just moved to join this sudden improvisation, on the bass guitar.
This is all what the arts is about. If you are in Ghana and you really want to feel what William Wordsworth defined as the 'spontaneous overflow of powerful feelings' please make your way to the Nubuke Foundation behind the new Mensvic Hotel. 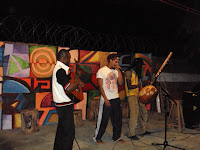 Jah-wi on the mike, Shaka on the Djembe and Kyekyeku on guitar. Jah-wi is a mysterious lyricist. His most popular song nkranpaen (someone who is bony) would not leave you alone. He has a beautiful way of singing.
At Ehalakasa we are one big family. None is bigger than the other. An artist could call another artist and soon a song would composed and ready to be spilled. In fact, if you forget your beat at home, worry not Jah-wi would give any beat you want and Kyekyeku would provide the guitar beats. 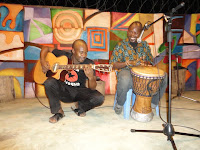 Nii Lantey on drums (picture on the right). He is a poet and spoken word artist and performs in Ga, English and Twi. His favourite instrument is the drums as you can see. Here, he and Kyekyeku are stringing things together. Very lovely tunes are produced.


Nii Lantey has a several songs but one that would blow your mind is sanya sɔɔ.

Universality of the Arts 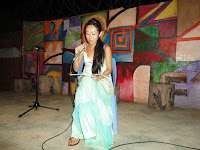 We have had performers and artistes from various countries. There is Henry Ajumeze, whose collection of poems titled Dimples on the Sand was reviewed here, coming all the way from Nigeria; Shaka is from Burkina Faso and Roboan is from Mexico. Roboan sings in Spanish, English and French and could play the flute, guitar and sing in a single performance.

This Sunday we had two Japanese: a singer (Hatsumi) and a poet. The picture to the left shows the Japanese poet reading to the audience The Family. 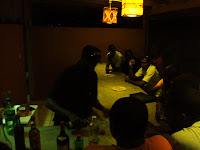 There is a user-contributed bar. Thus, the cost of entering this place is to bring a friend, a drink or both. At the bar is Sir Black, the man who wears nothing but black. Come and meet him with his deep thoughts and impressive 'vibes' as a spoken word artist who has performed in many countries. After the first session we break to the bar where participants interacts with each and share drinks. Friendship bonds are formed and life-time friends made. I have known a lot of people just being here.


To reinvigorate the program we have re-introduced the Talk session: for about twenty minutes we discuss topical issue. The topic for last week was:

In so doing we linked it to the recent happenings in Tunisia, Egypt, Yemen, Algeria, Jordan and the rest. The discussion was hot and intense. The flow of unadulterated energy, knowledge and zeal is palpable. Another thing we have introduced is the proverb session. A participant willingly gives a proverb in a local language, translate it directly into English and provides the context within which it could be used.

When I first joined this group, in 2009, I was shy. I remember my first poetry reading. I shivered! That was the first time I am reading to the an audience. I felt my bones chattering. Yet, a year and half on, I host part part of the program. This is what Ehalakasa is all about. Because Ehalakasa! It Lives in Us.
Eha-Lakasa TalkParty