One Day I will Write about this Place by Binyavanga Wainaina 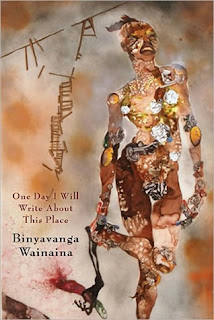 I first heard of, and met, Binyavanga Wainaina at the American Corner of the Legon Centre for Foreign Affairs (LECIA) of the University of Ghana. He had come there with another literati, Kojo Laing, whom I was also meeting for the first time. In his white linen trouser and long-sleeved round-neck top and green shoe, I settled to listen to this eccentric author in the company of friends. He informed the audience that what he was going to read would be from the manuscript of an upcoming memoir. Like most authors, he brought out his Apple laptop with care and set it on his lap. Opening it, he set out to read to us paragraphs. All I remember now from the reading is the tiny voice he had used to read to us pictures from his childhood and, most importantly, the loud laughter that followed every line.

The very next day I requested to be his friend on facebook. For those who are still not sure of whom he is, Binyavanga Wainaina is the author of, arguably, the most referred to satirical article on writing 'about Africa' titled How to Write about Africa. He is also the 2002 Caine Prize winner and founding editor and publisher of Kwani?.

I was therefore happy to read about the publication of his memoir One Day I will Write about this Place. According to Granta Magazine:

Binyavanga Wainaina tumbled through his middle-class Kenyan childhood out of kilter with the world around him. This world came to him as a chaos of loud and colourful sounds: the hair dryers at his mother's beauty parlour, black mamba bicycle bells, mechanics in Nairobi, the music of Michael Jackson - all punctuated by the infectious laughter of his brother and sister. He could fall in with their patterns, but it would take him a while to carve out his own. In this vivid and compelling debut, Wainaina takes us through his school days, his failed attempt to study in South Africa, a moving family reunion in Uganda, and his travels around Kenya. The landscape in front of him always claims his main attention, but he also evokes the shifting political scene that unsettles his views on family, tribe, and nationhood. Throughout, reading is his refuge and his solace. And when, in 2002, a writing prize comes through, the door is opened for him to pursue the career that perhaps had been beckoning all along. Resolutely avoiding stereotype and cliche, Wainaina paints every scene in One Day I Will Write About This Place with a highly distinctive and hugely memorable brush.

Binyavanga Wainaina is a singer and painter in words. He makes you smell, hear, touch, see, above all, feel the drama and vibrations of life below the brilliantly and concretely captured surface of things in Kenya and Africa. The memoir bursts with life and laughter and pathos in every line and paragraph.

The book is available on Amazon.com. Also, be sure that when it becomes available in Ghana, ImageNations would bring you his views on and review of this book. Until then, I would want to say that if you want a different narrative about Africa, read this book.
Author: Binyavanga Wainaina New Publications