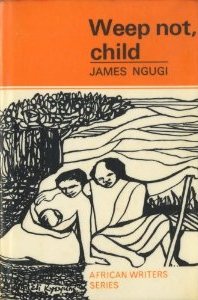 To begin with, this is a book I last read almost seven years ago. It is also one of the very few books I have re-read. Though I only review books I have just (within the year) read I feel the need to share this with you.

The story revolves around Ngotho and his children and their relationship with Jacobo and the Howlands. Ngotho was a man filled with emotions and loneliness. The type of emotion one cannot do anything to assuage its excruciating pains. As a patriarch Ngotho hurts from the knowledge that even though his children show great potential he cannot help them to fulfill. Worst of all is his inability to stand against Jacobo, the anglicised local man for whom he works. And when he remembers that his son, Boro, fought in the second Big War, his impotence becomes hurting sore; it stares starkly at him. When Boro ran into the bush to fight with the fighters, Ngotho finally gathered some Okonkwo-like bravery and attacked Jacobo. This attack led to a series of disasters. As Ngotho became spiritually alienated and emotionally disturbed; as he became weaker, his enemies, Jacobo and Howland became stronger.

Ngugi wa Thiong'o's Weep Not Child is a story that examines the relationship that existed between blacks and whites and within blacks themselves prior to independence. It explores several socio-economic issues such as access to education, jobs and the universal right to life. It also explores the Mau Mau bush-fighters and their struggle for an independence in Kenya. When access to social amenities is unequal and others have rights that are lost to others, there is a class struggle and a type of caste system is created. For instance, and here note the play on words, whereas the Ngothos were dead-poor and representative of the Kenyan proletarians, the Jacobos were rich farmers who worked for the white farmers, the Howlands. And names become important. From a very typical and native name of Ngotho, the poor and the masses, we move to those who have sold the land to the whites and serve them. Those who bow before them and in doing so shame the black race. These are called the Jacobos - a localised name for the English name, Jacob. Then the Lord of Lords, the colonialist is represented by Howland... How Land?

This classification were strongly implemented by all the individuals involved. So that even though Kamau wanted to learn carpentry and his 'black' master would not show him all he needs to know he complained bitterly, insinuating that this was the reason why - Ngotho - his father prefers to work for the whiteman;

Blackness is not all that makes a man ... There are some people, be they black or white, who don't want others to rise above them. They want to be the source of all knowledge and share it piecemeal to other less endowed. That is what's wrong with all these carpenters and men who have a certain knowledge. It is the same with rich people. A rich man does not want others to get rich because he wants to be the only man with wealth ... Some Europeans are better than Africans ... That's why you at times hear father say that he would rather work for a white man. A white man is a white man. But a black man trying to be a white man is bad and harsh. (Page 22)

And this is where the crux of the issue lies. The Africans in the novel who adopted the lifestyle of the colonialists were harsher and brutal in their treatment of fellow blacks than the colonialists themselves. Thus, Ngugi here is not piling up the blame at the doorsteps of the colonialists or Europeans but also showing that the ability to do good is inherent and that it is not necessarily true that the oppressed race is always vulnerable and pitiable. But most times that they inflict the pain by themselves on themselves. That on several occasions, in order to please their masters, those who pretend to have the masters' 'colour and manners' go to the extreme in their maltreatment of their very own tribesmen. This observation by Ngugi is not different from many other views, like Mia Couto's The Russian Bride in his short-story collection  Every Man is a Race, where the slave boss treated the others harshly to impress his Russian boss.

Again, this novel could be a precedence to Matigari, even as it precedes it in publication. For in Matigari, which was set in the period following Kenya's independence, we see that it was the rule of the Jacobos and not the Ngothos, even though it was the latter who had fought with their lives for independence. The Ngothos (or Matigari ma Njiruungi) remained an oppressed group and even though there was a change in government (in Matigari) the land was still being misappropriated by the same Jacobos (or John Boys) for their friends, the Howlands (or Williams).

Are these symbiotic relationship different from what prevails in most countries on the continent? Are they different from the today, where governments sell national assets for nothing, if only the capitalist entrepreneurs would promise their children good university education abroad? Or where governments refuse to see the harm being wreaked upon its country because that's where his personal sustenance comes from? Is it different from the present era, where the paunch is put before development or where the "I" supersedes the "We" even when the resource is a Common Resource?

To really understand the development quagmire, within which most African countries seem to be stuck or better still wallow, a reading of these two novels would suffice. For it is only when our present actions bestow positive externalities on posterity that we can hit our chest and say 'yes we've done well'. However, as it is now, we are light-years away from attaining such feat. Ngugi by this book alone has provided us with the solution to our problem by diagnosing what the problem is.

The Kenya of his birth and youth was a British settler colony (1895-1963). As an adolescent, he lived through the Mau Mau War of Independence (1952-1962), the central historical episode in the making of modern Kenya and a major theme in his early works. (Source)