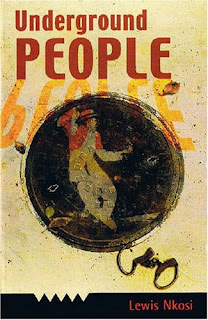 Lewis Nkosi's second novel coming after the award-winning debut Mating Birds is a unique story. Its uniqueness lies not in any attempt to create something which has never been done. Nor does it turn every sentence into a literary masterpiece, though each word, sentence, paragraph is a relish to read. The uniqueness of Lewis Nkosi's Underground People lies in its beautiful, fast-reading, and tension-building prose. And his ability to satirise South Africa's apartheid system whilst still keeping its seriousness, its human suffering closer to the reader.

Cornelius Molapo is a high-school teacher, amateur poet, speaker, a jitterbug dancer, a passionate lover and a lover of cricket. He is also a peripheral member of the National Liberation Movement, the movement fighting to end apartheid rule in South Africa. When the Pretoria Government began ceasing lands from the natives of Tabanyane for the white farmers and the NLM wanted someone to lead their field operations being carried out with the local resistance group in Tabanyane against both the Pretoria Government and the usurper to the Tabanyane throne, Sekala Seeiso, the NLM called on its most unlikely candidate, the high-school teacher, amateur poet, speaker, jitterbug dancer, passionate lover and lover of cricket, Cornelius Molapo. So when Cornelius was not seen for many days, people reluctantly suspected that he might be one of the many individuals who are being 'incommunicado' by the Johannesburg Government. The NLM, however, made a formal proposal to the Human Rights International to help them find Molapo, a party member. Anthony Ferguson, a representative of the HRI, was born and raised in South Africa but has been away for fifteen years. Having carried out successful assignments across most warring countries in Latin America and other parts of Africa,  Ferguson found that there are several reasons why this home-assignment would be no small an assignment. First Ferguson was not sure how far things have changed in South Africa and there is her celebrity twin sister, Hazel, to deal with. There is also the several winding South African laws that, though white, could entangle him.

What happens when a Tabanyane-born university-trained school teacher who has lived most of his life in Johannesburg is thrust into the mountains to fight the armed-to-the-teeth apartheid government and its local stooges for several months? Naturally, Cornelius Molapo, came to appreciate the predicament of his people; he identified with them in a way far different from what he had been inciting his listeners to do; he lived their lives and understood what it was to be a native. With time, this jitterbug dancer shed all traces of his 'city flesh' and his timorousness, taking on the hardened life of a guerrilla fighter and prepared to fight to death than give up on his people.

Set in the years - perhaps the very late 1980s to early 1990s - leading to the release of Nelson Mandela, whom in the book was referred to as Dabula Amanzi, during a period where the Immorality Act has been suspended and mix marriages were taking place with increasing frequency after forty years of apartheid and the government was losing the fight against the freedom fighters whilst finding it increasingly expensive to implement discriminatory laws, this story differ from many others that treat the subject of apartheid. In most of such stories, the struggle is peripheral to the story, shown through a broken home, through the arrest of the family head and the disintegration of the family. In such stories, the effects apartheid is what is told not the struggle, not the intentional and willing sacrifices people made to create a 'new social order'. In Lewis Nkosi's Underground People this 'struggle is the story'. However, the story is not only about THE struggle. It is also about the people in the struggle: their fears and aspirations. The breadth of Nkosi's paint brush was equal on all sides. Besides, though the subject matter is serious there are several humorous lines found scattered in the text. Describing her uncle, Sekala Seeiso, to Cornelius, Madi Seeiso said

The day you come across my uncle Sekala no-one will need to point him out to you! Try to imagine a monster six-foot-ten, with a face like a train locomotive or the front of Mount Taba Situ, and you have the exact image of my uncle. Children have been known to cry when he has but looked at them; an attempt at a smile from him is likely to send children running for shelter behind their mother's skirts. When he makes a joke he smiles so hard that his eyes seem to close up and vanish, bringing to perfection his exceptional ugliness! (Page 195)

Even the way the whites expected the natives to behave was comically presented and to know that this was actually how they were expected to behave made it all the more funny and absolutely mind-boggling. So that Joe Bulane, a lawyer by profession had to dress like a 'native' in order to outwit the authorities.

At first, Anthony did not recognise the man from the central committee. Bulane was dressed in faded old khakis, somewhat soiled and torn and sprinkled with mud, and although this was the height of summer on the highveld and the sun would soon be scorchingly hot, he was swathed in a thick army coat that looked frayed and moth-eaten, like something which might have been bequeathed to an importunate servant by a jokey employer. His face concealed behind dark glasses framed in red plastic which made him look like a friendly gargoyle. In spite of the sombreness of the occasion Anthony could not stop himself from laughing. Helpless, he leaned against the door of the car. 'Oh Mr Bulane, what a sight to greet the plains of Tabanyane!'

Bulane peered shortsightedly at his fellow traveller: 'Perhaps you might start off by addressing me properly,' he said gravely.

'From now on', Bulane said, 'I am not Mister Bulane. Just plain Bulane, your native boy.' 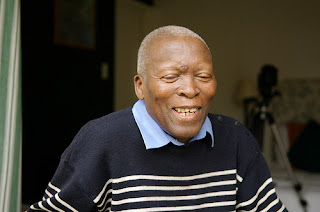 Brief Bio: Lewis Nkosi (Dec. 5, 1936 to Sept. 5, 2010) is known chiefly for his scholarly studies of contemporary African literature, and is the author of the novel Mating Birds (1986). Critics enthusiastically praised Nkosi's prose style and narrative structure in Mating Birds, and several have compared the work with Albert Camus's The Stranger. Nkosi was born in Natal, South Africa, and attended local schools before enrolling at M. L. Sultan Technical College in Durban. In 1956 he joined the staff of Drum magazine, a publication founded in 1951 by and for African writers. In his Home and Exile and Other Selections (1965), Nkosi described Drum's young writers as "the new African[s] cut adrift from the tribal reserve--urbanised, eager, fast-talking and brash." According to Neil Lazarus, the description fitted Nkosi as well. "Nkosi's whole bearing as a writer," he wrote, "was decisively shaped by the years in Johannesburg working for the magazine." In 1960 Nkosi left South Africa on a one-way "exit permit" after accepting a fellowship to study at Harvard University. Now living in England, he teaches and writes articles on African literature. In addition to the novel Mating Birds, he has also produced several plays and collections of essays, including The Rhythm of Violence(1963), Malcolm (1972), The Transplanted Heart: Essays on South Africa (1975), and Tasks and Masks: Themes and Styles of African Literature (1981). (Source)