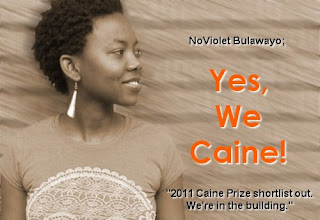 I had always known that the announcement of the Caine Prize for African Writing would fall on my birthday. However, in joyful and thoughtful moods that birthdays always bestow upon its adult celebrants, I entirely forgot to follow the announcement on twitter. Thanks, however, to the internet I have been able to retrieve the announcement of the winner.
Press Release
Zimbabwe’s NoViolet Bulawayo has won the 2011 Caine Prize for African Writing, described as Africa’s leading literary award, for her short story entitled ‘Hitting Budapest’, from The Boston Review, Vol 35, no. 6 – Nov/Dec 2010.

The Chair of Judges, award-winning author Hisham Matar, announced NoViolet Bulawayo as the winner of the £10,000 prize at a dinner held this evening (Monday 11 July) at the Bodleian Library in Oxford.

The language of ‘Hitting Budapest’ crackles. Here we encounter Darling, Bastard, Chipo, Godknows, Stina and Sbho, a gang reminiscent of Clockwork Orange. But these are children, poor and violated and hungry. This is a story with moral power and weight, it has the artistry to refrain from moral commentary. NoViolet Bulawayo is a writer who takes delight in language.

NoViolet Bulawayo was born and raised in Zimbabwe. She recently completed her MFA at Cornell University, in the US, where she is now a Truman Capote Fellow and Lecturer of English. Another of her stories, ‘Snapshots’, was shortlisted for the 2009 SA PEN/Studzinski Literary Award. NoViolet has recently completed a novel manuscript tentatively titled We Need New Names, and has begun work on a memoir project.

Also shortlisted were:
The panel of judges is chaired by award-winning Libyan novelist Hisham Matar, whose first novel, In the Country of Men, was shortlisted for the 2006 Man Booker Prize. His second novel, Anatomy of a Disappearance, was published by Viking this March.

Last year the Caine Prize was won by Sierra Leonean writer Olufemi Terry. As the then Chair of judges, Fiammetta Rocco, said at the time, the story was

ambitious, brave and hugely imaginative. Olufemi Terry’s ‘Stickfighting Days’ presents a heroic culture that is Homeric in its scale and conception. The execution of this story is so tight and the presentation so cinematic, it confirms Olufemi Terry as a talent with an enormous future.

Previous winners include Sudan’s Leila Aboulela, winner of the first Caine Prize in 2000, whose new novel Lyrics Alley was published in January 2010 by Weidenfeld & Nicolson, as well as Binyavanga Wainaina, from Kenya, who founded the well-known literary magazine, Kwani?, dedicated to promoting the work of new Kenyan writers and whose memoir One Day I Will Write About this Place will be published by Granta Books in November 2011.