86. Dew in the Morning by Shimmer Chinodya 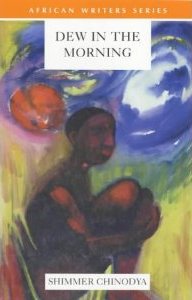 Shimmer Chinodya's first novel, Dew in the Morning, deals with the gradual changes that engulf individuals, villages and the environment as population increases and the carrying-capacity is exceeded. Set in a small rural community in northern Zimbabwe, Dew in the Morning tells this story from the point of view of Godi, a young boy whose father lives and works in the city but also keeps a farm and family in the village.

As crops failed and life and the general agrarian economy began to suffer after seven years of adverse weather conditions, the government moved people into the northern parts of the country where the land is fertile and the forest virgin. This massive exodus of the derukas - newcomers - into existing villages, which hitherto had remained closed to outsiders, led to the degradation of the forest and of the people's lives, the tension in values and the adaptation of new cultures. Godi leads us through the changes that took place in the village life like replacing forests with buildings and farms, fencing off farms to prevent destruction by grazing cattle and above all the fight for more land as the village's population increases. Even fruits, which at first were picked from beneath the trees, were now harvested in their green state and stored for ripening to take place. In the middle of all these is headman Jairos, a sloven patriarch whose requirement for land lies in the provision of alcohol and cigarettes.

Now the forests were gone and people had become restless. The owls did not hoot anymore. The huge trees where they had perched had been cut down for firewood. Ten years previously, owls had been part of the village, but now when an owl hooted people woke up, with throbbing hearts, to listen. Snakes no longer came slithering across compound clearings attracted by firelight. They kept away from the tread of human feet.

Village children shook the once-respected fruit trees, battering their trunks with rocks to make them shed their fruit. Some children even collected green fruit to ripen at home and sell to the bus passengers on the road. Gone were the days when children believed that shaking fruit trees would get them lost in the forest and that walking with upturned axe blades would anger the Gods into withholding the rain.

In all these, the one thing that never changed but was strengthened by the strange deaths that took place was the belief in spirits and witchcraft. When mysteriously people began to fall dead in matter of hours and days without showing symptoms of sickness in previous days, headman Simon who had succeeded Jairos (after the latter became mad), decided to call in the best shaman in the locality to sniff out the witches and wizards. In fact, this is one book that provided an unadulterated, non-prejudicial, non-judgemental view of witchcraft and its place in African societies. Where most writers would have exhibited their 'modernity' through derision - showing off their 'progressiveness' - Chinodya remained true to the core belief and attitude towards spritism. So that even though Godi and his mother were Christians, they submitted to the shaman.

All through the narration we observe the personal changes that Godi was going through; his affection for this one lady she swam with sometime ago and the frequent Sunday visits he made to her village, half a morning's walk away from his. Chinodya also brought out clearly the gender disparity that existed. Whereas Godi and his brothers were being educated in the city, coming home (to the village) only when on vacations to help their mother with farm work, the girls were always with their mother, working on the farm. Thus, a greater theme of this novel is one of change(s): environmental changes, cultural changes and sociological changes. And whereas some of these changes - the first two - took place within the pages of the book, the latter - as it deals with gender and accessibility - might have taken place outside of it.

Overall, this is a good book especially if you really want to know how rural life is. The author presented it as it is and unlike many of such novels refrained from assigning ascribed needs to rural denizens and portraying them as in dire need of things they know nothing about. This being positive though, could as well be seen as negative by some readers who are likely to classify the novel as a pastoral romanticism. However, written by an 18 year old, such sentiments are likely to be genuine.
_________________________________
Brief Bio: Chinodya Shimmer (b. in 1957), is a Zimbabwean writer and has won the 2008 Noma award for literature for his latest novel "Strife". The novel Strife is a rich and densely written novel that explores the life of a large family growing up in Gweru whose father aspires to be an enlightened Christian man. He sees his children through school and college where they do well but as adults, they are struck by a mysterious illness which hinders their personal development. Was born in Gweru, Zimbabwe, in 1957, the second child in a large, happy family. He studied English Literature and Education at the University of Zimbabwe.  After a spell in teaching and Curriculum Development he proceeded to the Iowa Writers’ Workshop (USA) where he  earned an MA in Creative Writing. (Source)
____________________________________
* Zimbabwe, after this post, is no longer part of the African Reading Challenge.