16. The Thing Around Your Neck 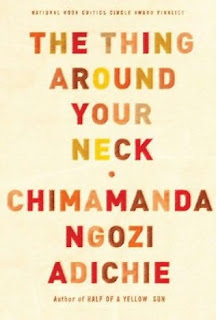 Ms Adichie's third novel, The Thing Around Your Neck, is a collection of twelve short stories set in Nigeria, America, or Cape Town  and sometimes switching between Nigeria and America .Though the stories are not linked, a common theme runs through, the life of Nigerians. More detailed subject matter includes religious fanaticism (a clash between Christians and Nigerians), interaction between traditional religion and Christianity, and marriage life.

Set in Kano, Northern Nigeria, 'Private Experience' tells the story of religious intolerance existing between the Igbo Christians and the Hausa Muslims in Northern Nigeria. However, amidst  the bloodshed, two women, one Igbo and one Hausa, worked in cooperation to ensure their survival. Thus, whilst the bigger picture shows lack of restraint amongst these two religious groups, on an individual level, people seem to see beyond religion and are more willing to help one another. This was also seen in her second novel 'Half of a Yellow Sun' where Olanna was saved by her Muslim ex-fiance. Adichie's main character in 'Ghosts' resembles the characteristics of her biological father. First, she named this character James Nwoye which is close to her biological father's name: James Nwoye Adichie. Second, James Nwoye was a professor in Mathematics, whereas as James Nwoye Adichie was the first Professor of Statistics in Nigeria. The story tells the life of two university lecturers after the Biafran war. The story could easily have been an extension of Half of a Yellow Sun for some of the description in this story fits those in the latter story such as the desecration of lecturers bungalows and the death of Christopher Okigbo during the Biafra war. This story has both facts and fiction. In reality Chris Okigbo died whilst fighting for the Biafran war. Chris took on the character of Okeoma in Half of a Yellow Sun. There were more than one ghosts in 'Ghosts' and this indicates the depths of Adichie's writings.

In 'On Monday of Last Week' and 'The Shivering', Adichie shows the life of Nigerian immigrants in America. How they strife to survive and still pretend to be making it; how they struggle to obtain working permit and green card; how they react to the cultural shock. Similarly, in "Arrangers of Marriage" Chinaza  was to experience no joy in a marriage of convenience when she travelled to America with his new husband, Udenwa, who rather want's to be called 'Dave', claiming that for one to progress in America, one has be like the Americans. Chinaza never called her husband by his name always referring to him as 'my new husband' as if there was an old one. This shows the chasm between them. In her eagerness to leave she complained to an African American, who has taken on a Swahilian name. She was shocked when Nia told her that she had 'fucked' her husband several times. She had come to Nia, after discovering that her husband is married to a white lady, as a means of obtaining a green card. Thus, in 'Arrangers of Marriage', there were two arranged marriages involving one man: one to get a green card and the other to get a Nigerian wife. In 'The Shivering' and 'Jumping Monkey Hill', Adichie expertly touched on a taboo subject, one that is gradually strangling Africans but one which they prefer not to talk about--gay or homosexuality.

The title story 'The Thing Around Your Neck' also tells of the struggles a lady who had won an American visa lottery had to go through whilst in America. From the near rape by her uncle, whom she isn't related to by blood, to her work in restaurants, she finds out that the America she reads is different from the America she sees. After finding love and establishing herself, she received a letter from her mother informing her about the death of her father five months ago. This story is really touching. The last story in the collection is the 'Headstrong Historian.' This story touches on or continues from Chinua Achebe's 'Things Fall Apart'. It tells the story of the colonisation of a village and how a young woman was able to keep her head up even when all others, including her father and brother, were deeply swallowed by the whiteman's God. Whilst in school she read The Pacification of the Primitive Tribes of the Lower Niger (this is the novel written by the District Commissioner in Achebe's 'Things Fall Apart') and later in life, after she became a Historian by twist of fate, she wrote Pacifying with Bullets: A Reclaimed History of Southern Nigeria. She later changed her name from Grace to Afamefuna, a name given her by her equally headstrong grandmother. 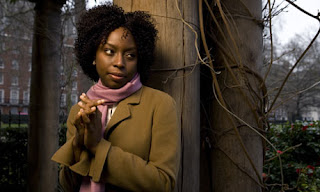 Though each of these stories is unique, it is always clear that Ms. Adichie's stories always deals with Nigeria's past and present. The Biafra war, the numerous coup d'état, and the religious crisis have always featured  strongly in or served as the background to Adichie's stories. As a daughter of a university professor, it is understandable her fascination with campus life, justifying the ubiquity of University of Nigeria Nsukka in Adichie's stories such as it did in 'Cell One' and 'Ghosts'. Adichie's character formation and development is second to none. She is really a master storyteller.

This is an interesting collection but one which cannot be compared with Purple Hibiscus or Half of a Yellow Sun. However, I highly recommend this novel to all of Adichie's fans and to every individual who loves stories.
Author: Chimamanda Ngozi Adichie Author's Country: Nigeria Rating: 4.5 Review Short Stories Year of Publication: 2001-2010