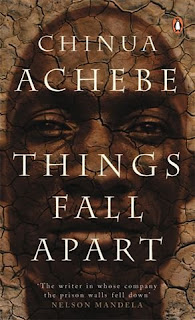 Published in 1958, Things Fall Apart is one of the most widely read African novel. It is the first of Achebe's body of work and also the first book of what is usually referred to as the African Trilogy. Other novels in this trilogy are: No Longer At Ease and Arrow of God.

Set in Umuafia in the 1930s or so, Things Fall Apart, tells the story of the rise and fall of Okonkwo. Okonkwo was widely known throughout the nine villages of Umuafia for his warring prowess, where he is famed for having brought home five heads from all his wars and for his wrestling prowess for having thrown down the Cat. He was also industrious and rich, had three wives and many children, had large yam farms and had taken three of the four available titles in Umuafia.

However, Okonkwo's bravery, belligerence and industriousness was fuelled by his fear of inheriting his father's known weaknesses. As a result Okonkwo lacked self-restraint and he perceived violence as the key to every problem and these made him even weaker, for he paid heed to no advice and considered anyone who spoke against war or violence as a woman in a man's skin. After going against counsel and participating in the death of Ikemefuna, a young lad who had come to stay with him and had come to know him as his father, Okonkwo's weakness became clear, for his participation was solely based on the fear of being described as weak by his age-group.

Things came to worse when his son Nwoye (later Isaac Okonkwo) left his father's compound to join the colonialist religion, Christianity. He was cut off from the family and Okonkwo's hatred against the new religion that has become established in his village increased. Later, he was to murder one of the court's men and realising that none of the people of Umuafia supported him, committed suicide. Thus, upon all his bravery, fame and riches he was buried in a way similar to his father, a burial devoid of decent funeral.

This is an interesting novel that tells of the effects of the coming of the Europeans (or specifically the British) and their imposition of their form of government and religion on the Igbo community of Nigeria. It also gives an elucidation on the traditions of the Igbo people of Umuafia, which was hardly understood by the Europeans who thought of their (Umuafians) actions as savagery and primitive. Finally, it shows how a people's religion and tradition were gradually eroded and absorbed by another religion and tradition, which was even more difficult to understand by the people, just because the colonisers never understood the colonised and hence considered their actions primitive and inhumane. Logically, this has been the downfall of Africa's religion to the extent that today most portrayal of the African religion is in the negative sense even by Africans themselves.

This novel together with his Arrow of God was voted into Africa's Top 100 books of the 20th Century. Achebe is one of two authors to have two of their works on this list.

As I have said before, this is a widely read novel. However, I would recommend it to anyone who loves to read, for it is Achebe who popularised modern African Literature in English. The book is available at both the University of Ghana's bookshop and Silverbird at different prices.
____________________
PS: This is also on the list of 100 books I am preparing, which I intend to read, together with other novels as they become available, over the next 5 years. In all I have read three books on this list.
Author: Chinua Achebe Author's Country: Nigeria Novel Rating: 6.0 Review Year of Publication: 1951-1960