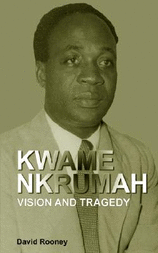 The activities marking the centenary celebration of Ghana's first president Osagyefo Dr. Kwame Nkrumah would be launched next week, in addition to this, and as part of the celebration, his birthday (September 21) has been declared a national holiday by the present government (see the September 4, 2009 edition of the Daily Graphic: Nkrumah's birthday declared a holiday). However, how many Ghanaians truly know the man, Nkrumah, apart from being the person who won Ghana its independence. Most of us born way after the Nkrumah era (1950 to say 1970) know little of this son of Africa who has being both deified and demonised in one breath, whilst being labelled as a "great African and not a great Ghanaian" by academicians such as Professor Ali Mazrui.

David Rooney's book gives an account of Nkrumah right from his birthplace at Nkroful to Achimota, London, Lincoln University, back to Ghana, and finally Guinea where he lived after the coup of February 24, 1966. It also provides certain events that would hardly be heard in stories concerning Nkrumah especially the chapters titled 'Socialist State', 'Foreign Policy' and 'Denouement'. This criticisms border on Nkrumah's ideologies concerning the creation of scientific socialism for Ghana and a union government for Africa. His lofty ideas of rapidly transforming Ghana and taking the masses out of poverty influenced by the advice of great development economists such as Kaldor, Bognar, Lewis, Killick etc swayed him more and the events leading to the murder of Lumumba by CIA agents and the Belgians and the attempts on his own life entrenched his socialist leanings the more. His lofty ideas, including rapid industrialisation, translated into huge social investments such as the state farms, tomato factory, meat factory, shoe factory etc, which were more than not a failure.

He however, became isolated when his vision for a union government for Africa faced stern opposition from the other African countries who had by then also gained independence from their colonial masters. To achieve his aim, which perhaps was more of an obsession to the point of being psychotic, he lent lots of money out to various African nations to fight the imperialists and colonialism. This, together with his indifference to financial matters, led to the deterioration of the economy, thus annoying the already incensed populace. But surrounded by sycophants and praise-singers, Nkrumah virtually lived in a world of his own ignorant of the true state of the economy and the anger of the people. Besides, after the several coup attempts on his life, he became almost schizophrenic and using the Preventive Detention Act, which existed in colonial times, put behind bars any person who exhibited a modicum of opposition. This made him more unpopular amongst Ghanaians. Also, this Act was abused and misused by the die-hard Marxists who surrounded him and he was personally blamed as the president.

Yet above all these Nkrumah was the leader who commune with world leaders and mediate in conflict situations amongst countries, though he was alleged to have exhibited subversive tendencies, especially against countries that were against his idea of the union government.

What is not to be forgotten is the organisational power he brought to the United Gold Coast Convention (UGCC), the political party headed by JB Danquah that invited him to join and be the party's secretary. Prior to his assumption of this role, the UGCC had no flag, no offices, and did not operate in the northern territories. It was through the hard work of Nkrumah that made sure that all these were done, thus paving the way for his popularity when he finally broke off from the UGCC to form the Convention People's Party (CPP). Also, Nkrumah discouraged all kinds of political groupings around tribe, or class thus the Northern People's Party (NPP) (mainly for the Northerners) and the National Liberation Movement (formed from the UGCC) (mainly for the Ashantis) were discouraged.

Since this is the first book of Nkrumah that I have read I cannot challenge its content or stamp it as the ultimate truth, for the man is as enigmatic as the stories surrounding him. He is described as having ideas in different watertight compartments of his mind. However, certain points are worthy to note, and perhaps could be contested:
The story also suggested that perhaps, Nkrumah grappling with the failure of his decisions and lacking the capacity to handle it or perhaps knowing that he has come to the end of his 'political tether', allowed the coup to happen as he insisted on travelling to Hanoi when all the coup indicators were red and several advisors have told him not to leave the country. Besides, the coup occurred just two days after his departure.

However, all in all, this book would give you an account of Nkrumah with more details than you would get in popular stories. Its veracity can be verified by the reader later.

Note also that over fifty years on, Africa is still struggling with unity and an African High Command. The latter being one of Osagyefo's inchoate ideas for which he fiercely fought. This is a book that is to be read by all Ghanaians and everyone who wants to know more about the man, Nkrumah. However, I believe it would only be fair, as in all cases of studies, to read other accounts of the man.

As an aside, do you know that the word awam, which has come to mean deception, is actually an acronym from the Nkrumah era? It represents the Association of West African Merchants (AWAM) run by the Syrians and the Lebanese, which were accused of cheating the populace by increasing prices.

Rating this book would be a bit difficult since it is not a novel and is based on giving facts, which cannot be verified now. Besides, rating based on the style and type of narration would not also be fair. However, I would rate it based on its readability.
________________________
Read my poem on and for Kwame Nkrumah here
Author: David Rooney Country: Britain Non-Fiction Politics Rating: 5.0 Review Year of Publication: 1981-1990