17. Dimples on the Sand by Henry Ajumeze 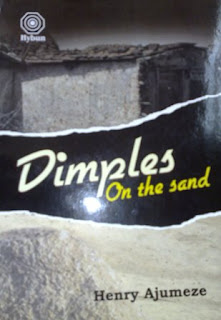 Dimples on the Sand is a collection of 36 poems by Henry Ajumeze. The collection is divided into five parts. For convenience sake I have tried to put the parts of the book into different subject matter. However, this should not be seen as a straight jacket categorisation, for it is easy to find a subject in more than one part. Thus, the reader could also name the parts according to how best he decides to group them.

Part One celebrates the Poet's father and his people, the people of Anioma commonly referred to as the Delta Igbos. Poems such as 'In the beginning, was Anioma', and 'My Anioma' celebrate the land and the people of Anioma, whereas 'Okanga', and 'To my father, flutist of all time' celebrate his father. It is clear that some of the poems here could be performed on stage accompanied by the Okanga and Akpele instruments. Putting all these poems together in one part shows clearly that the poet sees no difference between the land or his people and his father, the flutist. This is so in African culture where the land and the people are one. This becomes even more significant if the inheritance system is patrilineal. In the latter poem, the poet seems to be seeking direction from his dead father, seems to be looking for the way to self-realisation; to be one with his people. This comes out clear with lines such as:

are lost in our head full of jazz and reggae

But the winds from your nostril

Most of the poems are in the first person with the poet playing a significant role. It shows how much the Poet is attached to the activities.

Part Two of the collection is dedicated to a loved one, yet the poems speak more than that. There are numerous nuances in this cadence. Some of the featured titles include 'Night opens my mind', 'I will remember you', 'I stood in the middle of the empty flat', 'Dead Drunk' and many others. In these remembrance poems, the poet sound lonely, as in:

of metaphors; I become one

And yet there are those where he converses with his beloved even whilst he takes his bath:

Part Three celebrates a great son of the Ogoni people of the Delta State of Nigeria, Ken Saro-Wiwa, a human right activist, a poet, a novelist and a defender of the people who was killed by firing squad during the Sani Abacha regime when he spoke against the treatment by Shell BP. In 'Battered Earth', Ajumeze writes

I'd trudge along the corridors of pidgin

in the broken pages of verse

Other poems celebrating this great son of the Ogoni people are: "Behind the iron bars', 'Morning after the protest', 'The trial', and many others. In 'The trial', the poet describes the trial as:

in the theatre of a darkling plain..."

However, hope is kept alive in the 'Morning after the protest' where

The Fourth part deals with the general political landscape of Nigeria. It has interesting poems such as 'Dance softly, Baba', 'Season of Peace', 'Oil and blood', 'Raped homeland' and many others. It is no wonder that this part has the largest number of poems. However, since you cannot takeout Ken's demise from the general politics of Nigeria which is immersed in oil and bloodshed, there are some poems that address KSW such as 'The fire blasts'

No collection of poems that describes the politics of Nigeria, and for that matter of most African countries, would be complete if there is no poem that addresses the frequent seizure of power by the military. Ajumeze addresses this with poems such as 'Now that coup is no more treason'. In 'Storms gather' the poet shows that thought the use of military power can be used to quell any upheavals from the governed it is no solution for upheavals can arise from places beyond the reach and might of the military.

The last part (Five) deals with dedications to Niyi Osundare in 'Beyond midlife' and the Poet's daughter in 'Flanked by lullabies'.

The Poet's voice is unique and refreshing. His write cuts through emotions and whereas he is serious with his work he provides avenues for laughter. Thus, mixing laughter with seriousness is one of the hallmarks of Ajumeze's poetry. In one breath he would be dealing with a serious issue and in the next breath he is making you laugh whilst still tackling the subject at hand. In this way, the poem sticks into your mind. This is so in 'Dance softly, Baba', where he was admonishing a sitting president against the deeds of a past president. In this he writes

"...He must have bleated

In the crevices of Aso Rock...

He must have run naked

The pumpkin flag of our nation hoisted between his legs

In 'This Plateau, brother', the poet shows that the human life is pathetic, hence it is unnecessary to allow religious intolerance to destroy us, for when it does governors, politicians, all become

"... refugees who must wait

neither for the Armageddon

According to Niyi Osundare, whom the poet writes about in 'Beyond midlife', there is no choice for the African poet but be political. This statement best describes Ajumeze's poems for even when he is talking about his beloved in 'Night open my mind' he infuses it with the moral decadence (and the corruption of public officials whose duty it is to enforce the law) that has suffused the Nigerian, and probably the African, life. For in this piece of remembrance he writes:

It is from this celebratory love poem that the title of the book was derived:

"Whence you walked, behind are cicatrix of warmth

that belie demise, every footprint like a dimple in the sand

that my wish for eternity of laughter

when I hurled you from that village infested with bitterness

This is a collection of poems of humanity and life and aims to do exactly what Niyi Osundare said "to utter is to alter". Poetry is one aspect of the literary art that is gradually losing its focus and at the same time gradually losing its appeal. Yet, if readers could find themselves in the poem, could laugh with the poem, could quote from the poem, could associate with the poem on different levels, then that poem has succeed and the Poet has achieved his aim. With these Ajumeze has achieved his aim and more.

I would recommend this book to every lover of the Art. A copy could be obtained from the Nubuke Foundation located at No. 7 Adamafio Close, East Legon, or behind Mensvic Grand Hotel. Copies could also be obtained from Silverbird.

Since this is a collection of poems, its ratings should not be compared with other novels, yet even novels are sometimes incomparable as there are different sub-genres.
Anthology Author: Henry Ajumeze Author's Country: Nigeria Poetry Rating: 5.0 Review Year of Publication: 2001-2010