20. African Trilogy (2): No Longer At Ease by Chinua Achebe 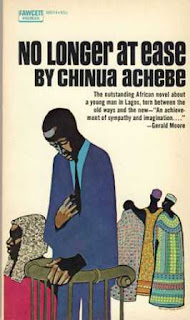 No Longer At Ease is the second book in a series of books, which have come to be called the African Trilogy. It was set in Lagos, Nigeria within the period prior to independence. In this novel, Chinua Achebe merges the traditional with the modern, creating a story that tells of the genesis of corruption and the culture of demand. The plot deals with how the culture of expectation leads to corruption and decadence of the individual and the institutions they work for. This story is similar to Ayi Kwei Armah's Fragments and fits a quote in Amu Djoleto's novel The Strange Man: "Convention and conformity are the foundation stones of decadence".

Obi Okonkwo, son of Isaac Okonkwo (or Nwoye) and grandson of Okonkwo in Things Fall Apart, had come home after a four-year academic sojourn in Britain and is expected to do great things because he now occupies an European position in the Civil Service. A lot is expected from Obi by his people (from Iguedo in Umuafia) from whose financial contribution his school fees was paid, from his family where he is the only male child, from his peers who expect him to live up to the social class he has been elevated to and from the society that has created such an elite class for itself. However, Obi, uncomfortable with all these expectations, had a head-on collision with all these forces; but this clash of expectations, actions and realities was to come to nought when he realised that society wields more power in matters of values and expectations than the individual. So in adjusting to these expectations, Obi had to not only stop his crusade against corruption and bribery but also to ultimately become an active participant, albeit an unwilling one.

Are our actions a direct result of society's expectations? Do we reflect society's values? For even though Obi's actions, ab initio, was to be upright, he quickly realised that being upright does not pay the bills neither does it improve one's social status. Elitist life requires more than his salary can support, yet society wouldn't expect anything less and so he must top it up from other sources.

Furthermore, even though Isaac Okonkwo had become a Christian, an issue that caused his father to disown him, he found out that there are some customs that Christianity does not wash away, as he silently rejected Obi's fiancée because she was an osu, or one set aside for the gods. 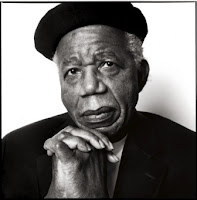 Whereas Things Fall Apart tells of Okonkwo's inability to adjust to the coming of the Europeans the their Christianity, No Longer At Ease tells of Obi Okonkwo's inability to adjust to elitist life in Lagos, leading to his fall. Chinua Achebe vividly portrays the transition of society's values and expectations from the traditional Iguedo to modern Lagos. However, one needs not to have read Things Fall Apart to understand No Longer At Ease. Each novel can be read as a stand alone and would not disappoint. The novel was narrated retrospectively and in this way the suspense was kept throughout till the end when, for instance, the cause and how Okonkwo fell is revealed to the reader.

To me this is an interesting story but not as much as its kin. It tells the story unidirectionally, thus it is not as multi-dimensional as the first and the characters are almost one-sided. However, this could not be a fault as it tells of the fall of a man, and no other. I would recommend this novel to all lovers of African Literature.

Please take a second to vote for your favourite book of the quarter. Thanks.
Author: Chinua Achebe Author's Country: Nigeria Novel Rating: 5.0 Review Year of Publication: 1951-1960