Chimamanda's debut novel, Purple Hibiscus (Farafina, 2003; 298), was published three years before the much-acclaimed and award-winning Half of a Yellow Sun. It won The Commonwealth Writers Prize and the Hurston-Wright Legacy award and was short-listed for the Orange Prize and the John Llewellyn Rhys Prize, and long-listed for the Booker Prize of 2003.

Set in Enugu and Nsukka, in Nigeria, 'Purple Hibiscus' is a story by fifteen year-old Kambili whose life and the life of her immediate family members (brother and mother) are imprisoned by a father, referred to only as Papa, whose attachment to the doctrines of the Catholic faith and to Western Culture is so strong and entrenched that it borders on insanity at best. Papa expects absolute obeisance and subservience without questions. His demand for perfections ranges from academics, where he would not accept a second position when there is a first position, to religion, where he considers the Igbo language as not good enough for the celebration of Mass.

Papa's wrath for the slightest infractions such as a question, a poorly covered hair or even spending one more minute than what he had approved of on his father's compound expresses itself in heavy slaps, booting, whippings, and scalding. To him, he does all these in the name of 'love' and in the interest of the offender so that he or she avoids hellfire. His anger is so strong and irrational that he once beats his wife, whose face is almost always swollen with dark circles around the eyes, till she miscarried and Kambili till she almost died.

However, Papa is generous and it is this generosity that made him take the title Omelora (The One Who Does For The Community). During Christmas he fetes the whole village of Abba and gives only a paltry sum of money to his father (because he is a heathen who wouldn't leave his gods to serve the Whiteman's God). So hard-hearted is Papa that when his father died he refused to attend the funeral and only gave money to his sister, Ifeoma, to organise the funeral, yet his respects transcends reverends and Igwes.

Yet, like Okonkwo in Achebe's Things Fall Apart, Papa's hardness cracked when he faced real challenge from Jaja and Kambila after they had visited their Auntie, Ifeoma, at Nsukka and had for once laughed unrestrained and enjoyed the beauties of life that were not possible in their father's plush mansion. Ifeoma's children Obiora, Amaka and Chima had the liberty to ask questions, challenge elders and above all laugh freely. It is this freedom to laugh, talk, ask questions, hold conversations and live freely without following prepared schedules that made Kambili and Jaja realised how much weird and timid they are. Back at Enugu, things started to fall apart when they started to rebel and Jaja refused, for once, to attend Mass. Subtly, everybody became fed up with Papa's harsh and neurotic behaviour.

The story was also set in a period when the military has taken control over Nigeria and there were rampant arrests and intimidation of individuals who speak against the military government. It was this outspokenness that led to the death of Ade Coker, Papa's editor at the Standard. Similarly, Aunt Ifeoma had similar brushes with the authorities leading to the termination of her appointment at the university, yet both of these characters handled their situations differently. Whilst Ifeoma took pragmatic steps to move on in life, Papa only cowed.

This is a silent narration of events in Kambili's life; silent because a large chunk of Kambili's statements were thoughts that were never spoken because of her timidity and her upbringing to only accept and not to question. In the end, there was the optimism that the rain would soon come down, portending that better days are to come. 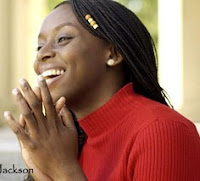 Comparatively I enjoyed reading this novel a bit more than I enjoyed Half of a Yellow Sun, perhaps because the subject matter (religious fanaticism) is one that I am passionate about. Ms Adichie makes words come alive and the effortlessness with which she seems to do this is mind-boggling. Right from the first word, first sentence and first page, she captures the imagination of the reader and carries him or her along till she ends the prose. The details of her description, such as the pressure exerted by the wings of a grasshopper, makes you wonder if she has being in such position before. I had to rush to the office loo (sorry for this) to complete the last ninety pages. I fully agree with Chinua Achebe when he wrote that "... Adichie came almost fully made."

I would recommend this novel to all fans of the old and new writers for Adichie cuts across generations and periods. Her writing style is so unique that presently, I guess she has no peer.
Author: Chimamanda Ngozi Adichie Author's Country: Nigeria Novel Rating: 5.0 Review Year of Publication: 2001-2010