For the next three months or so reviews for the Short Story Monday will be taken from the Caine Prize 2010 anthology titled A Life in Full and other stories. This anthology is made up of seventeen short stories in two parts; five of these were shortlisted for the 2010 Caine Prize for African Writing and have already been reviewed. The remaining twelve short stories, which is going to be spread over the next three months, were written at the CDC Caine Prize Writers' Workshop.

The Plantation by Ovo Adagha is situated in an oil-producing region of Nigeria. Like most stories set in such regions, the dichotomy between the inherent wealth of oil and the absolute poverty that has encapsulated and defined the lives of the inhabitants is glaring. The takeover of their fertile land by underground tubes that spews oil into the soil making the land non-cultivatable spells doom for the indigent indigenes. They see the wealth flowing through poverty only to inflate bellies in faraway places.

In this particular story, a man, coming from his rubber plantation, heard the whistling spill of petrol in his farm. Afraid of attracting attention to himself and eager to take advantage of it before the dreadful scavengers come to suck everything off depriving him of some of the wealth, even on his own farm, he set off home to bring his wife and children. But in trying to deflect attention, he attracted it because he who was friendly and jovial and would greet people - asking of the health of their children's children - now offered two-word responses to greetings. People questioned his sanity.

The man brought his family: three children and a wife. Namidi's wife sensed a terrible premonition in this mission. She warned his husband but Namidi brushed Mama Efe off; there is money to be made. But after the third, the smell of petrol diffused throughout the village by the wind and by the rascal Jackson. Ochuko, his son, was then assigned to keep watch over their acquisitions. Ochuko kept his watch and played as well with his friend Onome, whose parents have, perhaps, also come to fill their tanks. Suddenly, Onome fell head first from the tree they had climbed, and suddenly there was fire as Ochuko watched people draped in fire and dancing as if possessed by some hyperactive demon or like a spirit-possessed fetish priest.

This story brings out the tragedy of poverty; that even in search of wealth, trying to partake in the common wealth that had been appropriated by a few cheek-sagging individuals, death lurks. How did the fire come about? Did someone light a match? Or was the mid-day sun responsible? Thus, whatever the case may be, it is clear the the elemental forces together with their own ignorance work to keep them poor, to suppress them and if they get out of line, burn them. 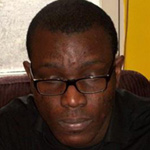 A simple story whose appreciation increases if one understands the geopolitics of the Niger Delta and how a group of people are being made poorer each day because their land contains the wealth of a country; because big corporations and big politicians are interested in their wealth but not in their lives and survival.
______________
About the author: Ovo Adagha is a Nigerian writer. His short stories, poems, and non-fiction have been published in several online and print journals. He recently co-edited a multi-national anthology of short stories, One World, published in 2009. He Lives in London. (Source: the anthology)
Anthology Author: Ovo Adagha Author's Country: Nigeria Rating: 4.0 Review Short Stories Year of Publication: 2001-2010