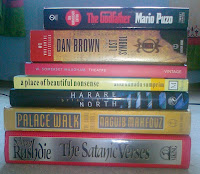 Few books have come into my possession which I would love to share with you. As always.
These are the books I have acquired and my reason for purchasing them. Reviews of these would be posted here though considering my 'almost' chronological reading pattern, it might take some time. Though sometimes my mood changes and I choose a recently-acquired book for reading.
Library Additions