92. Anthills of the Savannah by Chinua Achebe 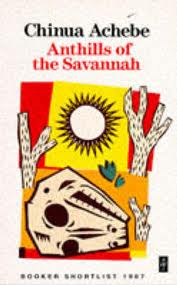 Anthills of the Savannah, a 1987 Booker Shortlist, is the fifth book of Achebe's oeuvre I have read. This novel is quite different from the first four of Achebe's books in terms of the narrative style, the prose, the setting and to some extent the theme. Had Achebe not written Things Fall Apart  and my favourite The Arrow of God, this book alone would have established the Man Booker International Prize winner (2007) as one of Africa's literary giants.

In this very unique novel, Achebe treats the issue of despots, male chauvinism and power from a rather different and unexpected perspective. He opens up the struggles that goes on behind the power scenes and how easily an innocent, generally good individual could easily transmogrify into an absolutely demented despot. Anthills of the Savannah is a tale of three friends: Sam, Ikem and Chris and the girlfriends of the last two: Elewa and Beatrice (BB) respectively. The story begins with Sam as the head-of-state following a coup d'etat. Sam is an army General and since his school days has never failed in anything he does. And so could take any advice and follow through with success and he did when he

fell [...] under the spell of [their] English headmaster who fought the Italians in Abyssinia in 1941 and had a sword from an Ethiopian prince

and so enrolled in the cadet corps in the country and went on to train in Sandhurst. As head-of-state with democratic tendencies in a military rule, his colleagues encouraged him to seek 'life presidency' through a referendum. Though this was not his original idea and he initially resented it (and Chris, the Commissioner for Information and Ikem, the editor of the National Gazette were both against it), it was the unsuccessful bid for this life presidency coupled with other events that set the platform that would eventually lead to tragic events for these three Lord Lugard College friends.

However, when Sam got to know, through these other 'colleagues' that his childhood friends were jealous of him because they think they were the ones who should have been occupying his current position as head-of-state, he decided to assert himself and put them in their proper place. First Ikem was suspended and Chris refused to write the suspension letter. He was later accused of organising thugs and presenting them to His Excellency as people from Abazon who want to meet the head-of-state to talk about the drought in their area. Abazon, an area north of Kangan - the fictional country where the story is set had earlier resisted the president's quest for life-presidency. This 'subversive' behaviour invigorated with a speech Ikem gave at a university. According to the State Research Council, he had advocated for 'regicide' when after his lecture a student had asked him if it were true that the Central Bank of Kangan was working to put the president's image on the nation's currency, to which Ikem had answered

Yes I heard of it like everybody else. Whether there is such a plan or not I don't know. All I can say is I hope the rumour is unfounded. My position is quite straightforward especially now that I don't have to worry about being Editor of the Gazette. My view is that any serving President foolish enough to lay his head on a coin should know he is inciting people to take it off; the head I mean.

So when after several vain calls through to Ikem the next day, Chris and Beatrice visited Ikem's apartment only to be informed by his neighbour that Ikem was taken in handcuffs the night before in a military Jeep, Chris new that his friend was in danger. And when it was reported that

he knew Ikem Osodi had been murdered and that his own life is in danger, after all

[I]nvestigations are still proceeding with a view to uncover all aspects of the plot and to bring to book any other persons or persons, no matter how highly placed, involved in this treasonable conspiracy...

This set a series of tragic events that involved a nurse, a student leader, Chris, Elewa and Beatrice, leading to the denouement. Chris had to travel incognito out of Bassa, the capital of Kangan. And this particular section of story is similar to what Achebe's country man, Wole Soyinka, had to go through as set out in his memoir You Must Set Forth at Dawn.

Though a significant portion of the novel was narrated by an omniscient narrator, the narrative started off in the first person with Christoper Oriko, Ikem Osodi and Beatrice telling their individual stories on how they became involved in Sam's government and how deep their friendship ran with several tangential stories all linked to the main story. The narrative also made sparing use of punctuations and though I was worried a bit, it accentuated its literariness. There were some places that I felt the author's quest to achieve literary 'gemstones' were overstretched, thus sacrificing ease of comprehension to beauty of language. It was as if, Achebe, set out to make Anthills of the Savannah a literary masterpiece and it is therefore not a wonder that it made the Booker Shortlist.

Brief Bio: Albert Chinụalụmọgụ Achebe (born 16 November 1930) popularly known as Chinua Achebe is a Nigerian novelist, poet, professor, and critic. He is best known for his first novel and magnum opus, Things Fall Apart (1958), which is the most widely read book in modern African literature. Raised by Christian parents in the Igbo town of Ogidi in southeastern Nigeria, Achebe excelled at school and won a scholarship for undergraduate studies. He became fascinated with world religions and traditional African cultures, and began writing stories as a university student. After graduation, he worked for the Nigerian Broadcasting Service and soon moved to the metropolis of Lagos. He gained worldwide attention for Things Fall Apart in the late 1950s; his later novels include No Longer at Ease (1960), Arrow of God (1964), A Man of the People (1966), and Anthills of the Savannah (1987). Achebe writes his novels in English and has defended the use of English, a "language of colonisers", in African literature. In 1975, his lecture An Image of Africa: Racism in Conrad's "Heart of Darkness" became the focus of controversy, for its criticism of Joseph Conrad as "a bloody racist". In 2011, The Guardian of London named An Image of Africa: Racism in Conrad's "Heart of Darkness" one of the 100 greatest non-fiction books ever written.(Source: Wikipedia; edited links)