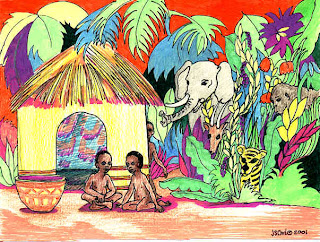 I have been promoting African Literature for some time now and it was only a matter of time that I talked about this issue, which having been flogged refuse to pulp.


What is the African Story? Is it a story of or about huts and deaths? Wars and famines? Child slavery and genocide? Ethnic cleansing? Gross human atrocities? Savagery? Cannibalism and cat killers and eaters? Growing up, in the mid eighties and nineties, and learning about the art of story-telling from my father and teachers at school, where Fridays and breaks were story telling periods, I was never told that Africa has its unique story. There we told tales of morality using animals as characters - fables they are known. These stories always ended with a 'what not to do' lesson of life. For instance, we knew that the spider was cunning, the lion brave and cunning and the snake could be wise. The Old Woman was always a repository of knowledge, never a witch. Yes! You heard me right! She was not a witch so that we would say in Twi yenko bisa nana Aberewa - let's go and ask the old woman - anytime there is a difficult decision to be made. And this infused our everyday language.

Twenty-years later, armed with tales to be told, then entered the Conradic and Naipaulic tales of vitriolic falsehood specifically told to denigrate a people. Must one speak with authority over something one scarcely understands? Yet that's what these groups of writers and their cohorts, whose philosophy seem to be that the more morbid the story about Africa the better, did. Not speaking the language, not understanding the culture of the people, the Conradic and Naipaulic tales as in The Heart of Darkness came to define what Africa and its people are all about: Barbaric. Backward. Savages. Cannibals. Pagans. Non-humans. So that a people whose religion is so embedded in their daily life came to be known as Pagans.

Recently, one of the 'greatest' tall-tale tellers, one who has won numerous awards for his books and accounts of people, the Nobelist, V.S. Naipaul, released his travelogue about Africa titled The Masque of Africa, glimpses of African belief. And that is all that this honoured, knighted writer saw, 'glimpses'. For how could one pass judgement based on this. Yet, in his book, this great writer intimated that the people of Ghana, of which I am one, and other West Africans eat cat because they are so hungry. And he wonders why people would eat cat. As a Ghanaian, first I don't eat cat, and I do not know of any tribe which are cat-eating. I wonder where Naipaul got this information to disinform his readers. I wonder the sample size on which his generalisations were based. As an agricultural Economist who deals with data collection and analyses on daily basis I know the importance of sample size and its effect on research. But of course, Naipaul - the great thinker of our time, the Sir - needs no sample to make his arguments. To him one man speaks for all as he does for his like-minded myopic writers. And yet there are those who are conditioned to believe him. And let me play the Devil's advocate and agree that cat meat is a delicacy in Ghana. How does this differ from those who eat dog, cow, chicken, or as a matter of fact all meat-eaters? You pet a dog or a cat, I pet a sheep or a goat, you eat mine and I eat yours. Does that make me bad? Yet, his book is an acclaimed. After all, this novelist is a Nobelist. An Oxford graduate too.

How did the African Story come to be believed? Having been bombarded with dead and dying Africans from wars, famines and diseases on CNN, BBC and others, people's thinking of Africa, including Africans themselves, became streamlined to death, dying, wars, famines and diseases. So that if it isn't about these it isn't about Africa. Anything to the contrary is not the authentic African Story. How could it be? They ask. How could something good come out of that dark continent of savages and monsters? Publishers accepted the people's views and would later publish only these things about the continent - the authentic African Story.

Enter, our own African writers into the fray. These writers, who think more of the market and commerce than about the veracity of what they are talking about, hiding behind the cloak of freedom of speech, pandered to the 'tastes' of the 'market'. Thus, cementing, strengthening, validating the 'authentic story about Africa'. These African authors accepted that these stories sells. Because the publishers said so and would publish nothing other than this. 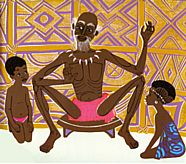 Yes, these things do happen as the Rwandan genocide, the DR Congo unending political and civil unrest, the Guinean and Ivorian crises confirm. There is an AIDS pandemic on the continent and that disease is wiping away families like morning dews in the face of the sun. Somalia is adduced as an example of a modern failed state. There is famine in parts of Ethiopia, Eritrea and Somalia. But there is also the brighter side of events. There is Botswana, Ghana (whose latest election was won with a little over 100,000 votes and because no struggles ensued the CNN and BBC refused to give it such coverage as they do to the warring countries). Yet, what is the German Story or the European Story. Is it the burning of the women as witches? the Inquisition? the killing of the Jews? What is the American Story? Is it the student-killing-student stories (Columbine massacre)? or the Healthcare issues? or what? Are there homelessness in America? Are there people who cannot afford healthcare? I don't believe that. Can all Americans read and write? What is the Great American Story? Is teenage bus murdering the story of Britain? Chimamanda Ngozi Adichie, author of Purple Hibiscus and Half of a Yellow Sun, talked of how she wouldn't get a publisher to publish her first novel (Purple Hibiscus) because it isn't (according to publishers) an African novel. When she finally got it published another, streamlined in her thoughts, pitied her that she doesn't know all African men are such abusive. So, having read American Psycho, she told the patronising Oprahic lady, that she didn't know all American teenagers are serial killers.

And so an industry has been made about Africa with the blessings of the so-called 'lovers' of Africa. Those TV icons who could make or unmake with tears and words. Those who decide what is to be read and not to be read. Those whose shallow sycophantic patronage of Africa could be called anything but sympathetic. Those Oprahic lot. Is it a wonder that Uwem Akpan's collection of five depressing and dystopian short stories titled Say You're One of Them, which saw no light at the end of the proverbial tunnel - no sliver of hope, was selected by Oprah's book club? I doubt. The other African novel is Cry, my Beloved Country by Alan Paton.

Is it not the African story that birthed movies like 'Tears of the Sun', 'District 9' and more recently 'Avatar'? (Mayowe Atte, a Nigerian author). Chimamanda talked about this in her podcast the Dangers of a Single Story and Binyavanga also talked about it in his article 'How to write about Africa'. Yet, this misrepresentation would go on until Africans themselves learnt how to write about themselves. Until they learn to know that the authentic African story isn't only about death, war, famine, diseases; that the only thing good about the continent is not about its wildlife; that an African has headed the UN before and a Kenyan-American is the president of America, this would continue to be the story about Africa.

Can't a continent's writers earn publishing rights based on the quality of their writings rather than the content of their stories? Should writers conform to this African Story rule? I hope the emerging African-owned publishing houses like Cassava Republic, Fafarina, Sub-Saharan Publishers, Ayebia-Clarke would not pander to what the 'market' says but would make quality material their hallmark
Article: Literary