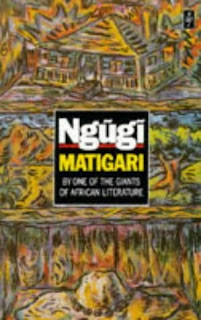 It was my first attempt at writing this review that led to my article on Precolonial and Post-Colonial African Literature. Ngugi's novel, Matigari, is one that is funny along all lines and at several levels. Just after independence, Africa's faithful literati realised the path along which the new governments were taken the country. They foresaw that such a path portends nothing but doom and so decided to speak against it. One of such prolific writers against the system in Kenya and because of the ubiquitousness of the atrocities on the continent for that matter Africa, was Ngugi wa Thiong'o.

In Matigari, Ngugi wa Thiong'o created a fictional hero Matigari ma Njiruungi (this in Gikuyu means 'the patriots who survived the bullets'). Matigari, having fought the colonialist into the bush and having kept the flame of independence going came from the forest to possess the land for which he had fought only to realise that the new Lords of the land, those who fought not but took the opportunity to jump onto the seats once it was vacated, had, in collusion with the colonialists, taken over his land and house and all his property, leaving him with nothing. The period where the sower does not reap what he had sown was still going on with utmost impunity. Matigari did not understand what has happened in his absence. He went about asking the people, the masses, who themselves have been beaten into cowardice by the government with the help of the security forces, where he can find justice and truth.

...My only thirst and hunger are to do with my troubled spirit. I have travelled far and wide looking for truth and justice...(page 94)

Having sworn not to use violence this time, he roamed the land, entering all corners and asking whomever he met where he could find truth and justice. And the people considered him mad in the beginning, yet he never gave up, he had hope:

With this Matigari went on ... asking, keeping his belt of peace on. He was arrested two times: once he was sent into a police cell the other into a mental home, and on all two he absconded. His name spread through the land and his fame led to different stories and theories. Some considered him Jesus Christ; some said he was female; others male; others tall; others short; yet they all agreed that Matigari, whom they had earlier considered mad was their saviour.

And with that, he plunged into the forest to retrieve his weapons to fight John Boy (a native Kenyan) and Williams, the former's father was a servant to the latter's father and after Matigari chased them into the forest their children had shared all the properties that was supposed to be for the people.

The novels fame was multiplied when in 1987 the government's security forces literally acted it out by going around in search for the person who was calling himself Matigari. Realising that there was no such a person and that it was a fictional hero in a book, the

... police raided all the bookshops and seized every copy of the novel. (page viii, Introduction)

Later the author was to join his book in exile.

The beauty of Matigari is not only about the prose or the precise use of language and the simplicity of the diction. The beauty lies in the veracity of the issues written about. Though a satire, the book represents the African society right after independence and today. One thing that came out clearly in this novel is the changeover from communalism (caring for all) to individualism, where each fighting for himself sold all. John Boy, whose education was funded by the community, refuted the ideology of communalism and advanced the individualism agenda

And through this oppression, the academia sold itself for they sought positions by toeing the line of the government and nodding and singing praises when they are called upon. They acted like puppets, responding to the strings of the puppet master. Matigari explained that

There are two types of people in this country. There are those who sell out, and those who are patriots (page 126)

This is an interesting book, a revolutionary book. Ngugi used a medium in which he could decry the rot that has taken society by its throat, cogently. Has anything change? No! It is only increasing! The numbers at the 'grabbing-stealing-cheating-killing' end is increasing and that the Matigaris are dying off, losing faith and hope in the system they helped established.

As you can see, this book has jumped onto my all-time favourites list. It is that good. I recommend it to all who love change, who want to see the right thing done.
Author: Ngugi wa Thiong'o Author's Country: Kenya Novel Rating: 6.0 Review Translation Year of Publication: 1981-1990