46. The Lion and the Jewel by Wole Soyinka 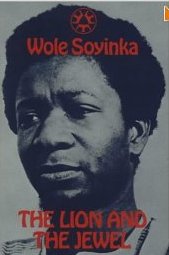 Comedic. In the Lion and the Jewel, Wole Soyinka tells a funny story - almost in style of the cunning Ananse folklores told in Ghana - involving four 'main' characters. Sidi is the Jewel: the village's belle whose beauty has been captured by a photographer and published in a magazine. As a result she sees herself as above anyone in the village including Bale Baroka, the Lion of Ilunjinle. Bale Baroka, is the Lion of Ilunjinle and its chief. He has several wives and is courting the love of Sidi, the village's Belle (the Jewel). Lakunle is a young (of twenty three years) bombastic teacher in the village who is bent on bestowing Western culture onto the people of Ilunjinle. In the meantime his priority is to stop the payment of dowry. When in school he wears an old threadbare un-ironed English coat with tie and a waistcoat. And he also loves Sidi. The final major character is Sadiku, the Lion's head wife. She became the head wife because she was the last wife of the previous chief who was succeeded by Baroka, the Lion and as tradition demands, she becomes the head wife of the new chief.

The story opens with Lakunle expressing his love for Sidi and denouncing strongly the payment of dowry. Lakunle describes the custom of dowry payment as

However, a young girl whose dowry was not paid is seen as she having forced to sell her shame becuase she was not a virgin.

Bale Baroka, the Lion, asked his head wife, whose duty it is to woo any woman the Bale wants for him, to tell Sidi to come for dinner one evening and to express his love for her, on his behalf. This the woman did. However, Sidi who has become famous and so having put on airs, told the woman the Baroka is too old and not fit enough to be her wife.

You waste your breath./Why did Baroka not request my hand/Before the stranger/Brought his book of images?/Why did the Lion not bestow his gift/Before my face was lauded to the world?/Can you not see? Because he sees my worth/Increased and multiplied above his own;/ ... (Sidi, Page 21)

Be just, Sadiku,/compare my image and your lord's -/An age of difference!/See how the water glistens on my face/Like the dew-moistened leaves on a Harmattan morning/But he - his face is like a leather piece/Torn rudely from the saddle of his horse ... /Sadiku, I am young and brimming; he is spent./I am the twinkle of a jewel/But he is the hind-quarters of a lion! (Sidi, Page 22/23)

And this set the stage for the Lion's cunning. Sadiku herself sent Sidi's message to Baroka and he in turn sounded surprised at his own request and told Sadiku of how he is no more a man:

Yes, faithful one, I say it is well./The scorn, the laughter and the jeers/Would have been bitter./Had she consented and my purpose failed,/I would have sunk with shame. ... The time has come when I can fool myself/No more. I am no man, Sadiku. My manhood/Ended near a week ago.

Sadiku, upon hearing this became happy and set out to celebrate though she had promised not to say a word to anyone. In her celebration, through songs, she told Sidi what has happened to the Baroka and how great women are. Sidi then asked Sadiku to help her taunt the weakness that has befallen the Lion by pretending that it was all a mistake when she rejected the Baroka's proposals. However, later we would read that Sidi became the Lion's wife.

Though the storyline is linear as it is in most plays, Soyinka uses the character of Lakunle to greater effect. He mocks the rapid embracement of vapid Western culture through Lakunle, who, using 'big' words, damned all traditional practices. We see that though he was a young man and Sidi loved him, he was never able to take advantage of what was presented him. Sidi was prepared to marry him any day anywhere yet his abhorrence of the payment of dowry was the cause of his loss. So that the Lion, using his wisdom (call it cunning), won the Jewel. Lakunle, however, berated Sidi strongly against her not covering certain parts of her body and her carrying things on her head, which Lakunle claimed, would spoil her spine. He even went ahead to call her 'weaker sex' and 'small mind'. And with these characteristics of Lakunle, he became almost like a caricature with no firm belief.

This is an interesting story written in poetic format: structure, language and delivery.

This being the second African play I have read, I have come to enjoy the genre. This is a book I would recommend to all. I cannot compare it with any of Soyinka's plays (this being the first), however, it is similar in 'effect' to Ola Rotimi's Our Husband has Gone Mad.
Author: Wole Soyinka Author's Country: Nigeria Nobel Laureate Play Rating: 4.5 Review Year of Publication: 1961-1970