71. A Question of Power by Bessie Head 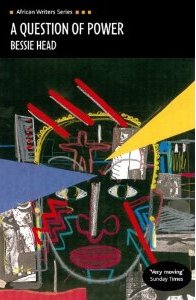 
For the Top 100 Challenge and the Africa Reading Challenge

This is the statement that introduces us to the bizarre world of Bessie Head's A Question of Power. This novel runs parallel with the author's life and perhaps documents the tragic and traumatic life of one of Africa's unrequited and most ill-treated author: leaving South African on an exit visa with the clause of never to return, it took about fifteen of years of being stateless in Botswana before Bessie was granted citizenship. In this novel, however, Bessie tells of a woman, Elizabeth - whose circumstances (white mother and native black South African father) were akin to hers - as she journeys from her home country, South Africa, to Motabeng, a village in Botswana. Before young Elizabeth grew to make her own decisions, she was told by the head of the missionary, where she stayed during most of her infancy, that her mother went mad and she had better be careful else she would also go mad.

Your mother was insane. If you're not careful you'll get insane just like your mother. Your mother was a white woman. They had to lock her up, as she was having a baby by the stable boy who was a native.

And mad she became. A Question of Power relates to us the intricacies, workings and visions of Elizabeth's mind as she moved in and out of insanity, hospitals and mental homes. Divided into two parts, the first part deals with Sello and the second part Dan. Sello was both God and Satan and he haunted the dreams and thoughts of Elizabeth. Later, he started appearing with Medusa and Elizabeth considered him to be benign almost god-like. Sello holds discussion and even though Elizabeth hated him she grew to like him for he was the one who provided her with 'the lever out of hell'.

Unlike Sello, Dan did not hold conversations with death; he also understood the mechanics of power and it was this quality of Dan that made Elizabeth's description of Sello as been merciful and having prophet-like qualities precise, for Dan was out to kill Elizabeth. He haunted her, leading Elizabeth to the edge of suicide and a visit to a dilapidated mental home. It was only through the intervention of Sello that Elizabeth survived Dan's threats of suicide. Yet it was to Dan that Elizabeth was attracted in the beginning. And Dan has many sexual perversions.

This is an emotional piece similar in essence to the movie A Beautiful Mind that told the life story of the Nobel Laureate in Economics John Nash who was a schizophrenic. Elizabeth's story inspires. It shows how we should not give up; how we must battle with ourselves if we are the hinderance to our own progress and a threat to our own lives and this Elizabeth and Bessie did so successfully. At several points I find myself not knowing what the end would be. For instance, though from the initial pages I found that Elizabeth may not die, I still couldn't resist such thoughts. Who would save her in this desolate Motabeng village where almost all the inhabitants are R.2 away from poverty, if not dead poor?

Though the story describes the events before, during, and after Elizabeth's breakdown, describing the nitty-gritty of the mental illness: describing their hallucinations and telling their conversations so that sometimes it is almost impossible to distinguish between the real physical characters and those that project from Elizabeth's mind, most of the beautiful lines and those that are deeply conscious, and would get the reader thinking, are those written during her breakdown periods, when she saw 'things'. Elizabeth's discussion revolved around politics, religion, sexuality and humanity.

And throughout that whole year Medusa only replied in despicable terms, the wrong things were stressed. When someone says 'my people' with a specific stress on the blackness of those people, they are after kingdoms and permanently child-like slaves. 'The people' are never going to rise above the status of 'the people'. They are going to be told what is good for them by the 'mother' and the 'father'. And she made wrong kinds of attacks on Elizabeth. (Page 63)

Isn't this a foible of autocrats? Isn't this what all of them are seeking or exhibiting - the Ben Alis?, the Mubaraks?, nations (East? West?), institutions (IMF? World Bank?) It continues...

Sello, the monk, had proclaimed this very road in opposition to horrors - let people be free to evolve, let everything alone and re-create a new world of soft textures and undertones, full of wild flowers and birds and children's playtime and women baking bread. He kept on looking hopefully at Medusa. Oh no, she simply wanted to be the manager of the African continent with everyone she found disagreeable - OUT. (Page 64)

In a conversation involving race, Elizabeth states that

The victim is really the most flexible, the most free person on earth. He doesn't have to think up endless laws and endless falsehoods. His jailer does that. His jailer creates the chains and the oppression. He is merely presented with it. He is presented with a thousand and one hells to live through, and he usually lives through them all. (Page 84)

Some commentators have stated that this novel could be read on two levels: an insider description of the mind of a suffering, delusional person and as an exploration of power relations and political-social evil. And on these two levels the reader leaves feeling satisfied.

To end this review, I quote the sentence that births this title:

If the things of the soul are really a question of power, then anyone in possession of power of the spirit could be Lucifer. (Page 199)

This is a brilliantly written novel about the nature of mental illness and the nature of oppression. It's almost like a transcription of A Beautiful Mind and more. If you ever loved that movie you would love this too. I enjoyed reading this though it took me a while, but I cannot blame the novel for it. Consequently, I would benefit from a second reading or re-reading of passages. This novel is on the list of the Top 100 African Books of the Twentieth Century. I highly recommend this to all lovers of literature especially to those who love to read something different or are adventurous in their readings.