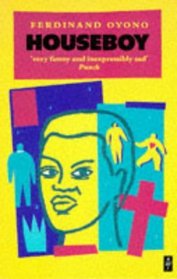 This is a story by a Houseboy written in the first person and in the form of diary entries in two exercise books. It describes the relationship between French colonialists and native Cameroonians during the period of colonisation from a Houseboy's perspectives.

The Houseboy, Toundi, escaped from Cameroon where he was wanted for an alleged crime - a crime he did not commit but has been framed up for his part of spreading the amorous and sexual encounters between his master's - the local Commandant - wife and the giant Prison Officer, M. Moreau. As a Houseboy, Toundi, saw a lot in the house of his master especially when his master's wife came to the household. And as innocent as he was couldn't keep his mouth shut on such issues but went ahead to ask questions pertaining to what he sees and it was these that put him into trouble with his master's wife and which later led to his death after escaping to Spanish Guinea. For instance, after discovering a condom under the bed of his master's wife, after she had asked to him to clean the place, the master's wife got angry and threw him out of the room. This got Toundi shocked. He doesn't know why a common rubber should make the master's wife angry so he set out to ask the other workers in the household who told him,

Toundi, will you never learn what a houseboy's job is? One of these days you'll be the cause of real trouble. When will you grasp that for the whites, you are only alive to do their work and for no other reason. I am the cook. The white man does not see me except with his stomach. (Page 87)

Innocent as Toundi was and fascinated by the ways of the whites, he kept on asking questions even when Kalisia had told him to leave the household because

... they will never forgive you for that. How can they go on strutting about with a cigarette hanging our of their mouth in front of you - when you know. (Page 100)

Toundi himself had run away from home when his greed led to a quarrel between his father and his friend's father. It was this greed for simple things like a lump of sugar that led him to seek shelter at Father Gilbert's residence and later the Commandant. Using this, Oyono shows how our greed for foreign things has led us to sell ourselves and conscience, has led us to reject ourselves, so that beaten and trampled and killed we still cling onto this greed.

The above quote shows the extent of the greed and the indecisiveness of natives' allegiance (note that Cameroon was first ruled by the Germans and then by French). Toundi's mother even predicted that his greed would lead him to his death.

My mother always used to say what my greediness would bring me to in the end... (Page 4)

From Toundi's exercise book dairy entries we are told of how Christianity was used to deceive the populace to succumb even though the propagators of the gospel practiced not their preach. They have illicit affairs, drunk, and extort. They arrest innocent civilians, beat them and when they die ask the natives to pray for their souls. Though the French (Europeans) pretended to hate the blacks (natives) and would sit at different places even at church services and use different entrance, they still slept with the natives and hide their deeds from one another.

I know why the Commandant is not like other European men without madams - who send their boys into the location to hire 'mamie' for them. I wonder what the commandant's wife will be like. (Page 46)

Oyono mixes humour and wittiness to explore the complex relations between Europeans and native Cameroonians. For instance, they (Europeans) showed more love for animals and plants than they did to humans.

Next we went to see the goat-park. Madame kept murmuring, 'Ah how sweet they are! How pretty they are!' She let them lick her hands. Then she stopped by the bed of roses and hibiscus. She bent down in front of each flower and breathed its scent in deeply. I was on the other side of the flower-bed facing her. She had forgotten I was there. (Page 48)

The perception of Europeans was also made clear from Toundi's keen observation. We see how each European tries to tell a 'better' story that shows how much the 'African is a child or a fool'. And when the father died in Africa and called him a martyr because he had died in Africa.

They lamented 'the Martyr' as they called Father Gilbert because he died on African soil. (Page 52)

Brief Bio: Ferdinand Léopold Oyono (14 September 1929 – 10 June 2010) was an author from Cameroon whose work is recognized for a sense of irony that reveals how easily people can be fooled. Writing in French in the 1950s, Oyono had only a brief literary career, but his anti-colonialist novels are considered classics of 20th century African literature; his first novel, Une vie de boy—published in 1956 and later translated as Houseboy—is considered particularly important. Beginning in the 1960s, Oyono had a long career of service as a diplomat and as a minister in the government of Cameroon. As one of President Paul Biya's top associates, he ultimately served as Minister of Foreign Affairs from 1992 to 1997 and then as Minister of State for Culture from 1997 to 2007. (Source)
Author: Ferdinand Oyono Author's Country: Cameroon Novella Rating: 4.0 Review Translation Year of Publication: 1951-1960