53. A Man of the People by Chinua Achebe, A Review 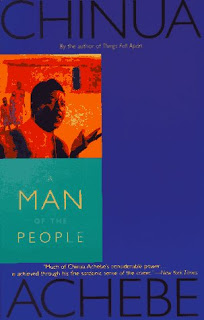 A Man of the People follows Arrow of God in publication; however, this story is quite different from the first three of Achebe's works popularly referred to as The African Trilogy. In A Man of the People, the voice and the characterisation, and to a lesser extent the subject matter are different. It is as if Achebe, thirty-six years at the time of publication, and having enjoyed immense success with his Things Fall Apart debut, wanted to experiment or perhaps challenge himself to write as he had never before.

Unlike No Longer at Ease, the corruption Achebe writes of in this novel is not that perpetrated by Civil Servants but one seated in the fish's head - the corruption that was festering in the body politic, which had subsumed or smothered all developmental agenda into oblivion.

Odili, the narrator and subject of the story, tells of how he moved from being a private school teacher to become a disappointed politician. Considering himself an incorruptible man - with an idealist view about the world - Odili was eagerly waiting for the day he would complete school, get a job and be givne a car. However, upon completion he realises that things aren't as smooth as he had thought and that in the present post-independence era

However, a larger part of the story revolves around Odili's relationship with Nanga - a former teacher of Odili now a Member of Parliament of Anata, considered by his constituents as A Man of the People, because of his smooth talk, his suave appearance, his fake obsequiousness and his seeming innocence which makes him a noncandidate even in a contest to kill ants. Odili disliked Nanga right from the onset but when Nanga visited his school and they met, the teacher-student bond was sparked. When Odili told Nanga that he had applied for a scholarship, the latter invited him to his Bori home so that he would influence the appropriate authorities to speed up his application form. This invitation, in itself did not impress Odili, however, because he also had a mission of his own at Bori he accepted.

Odili went ahead to tell us how things worked at Nanga's house; how money changed hands; how some women exchanged sex for contracts and money. But it was Nanga's suavity and pretentious innocence that hooked him so that I began to question Odili's integrity. How do we call a person who hates corruption but willingly enjoy the wealth of people he knows are corrupt? In Ayi Kwei Armah's The Beautyful Ones are not yet Born, The Man's - the main character - wife called them chichidodo, that is a bird that hates faces but feeds on faecal worms.

We all laughed, including the driver whose face I could see in the mirror. We joked and laughed all the way back. In Chief Nanga's company it was impossible not to be merry. (Page 61)

Thus, the man Odili hated became his friend, exchanging secrets and challenging each on the number of girls they had each bedded and how they were able to outwit them. Things would, however, take a dangerous turn when Nanga bedded Odili's 'girlfriend'. Odili's behaviour after this incident could best be described as infantile, for preceding this incident, Odili himself had told Nanga that Elsie - the girl in question - was just a kabu kabu, or a 'good time girl' and that there was nothing serious between them. Yet, it was this  which led to the break in relationship between them, providing Odili with the epiphany he needed to divest himself of Nanga's wealth-clutches.

It was only after Max had left for Court at around nine that I finally felt the full weight of the previous night's humiliation settling down on me. The heat and the anger had now largely evaporated leaving the cold fact that another man had wrenched my girl-friend from my hand and led her to bed under my very eyes, and I had done nothing about it [...] Because the man was a minister bloated by the flatulence of ill-gotten wealth, living in a big mansion built with public money ... (page 75)

Odili would visit his friend - Max - who together with friends was in the process of setting up another political party to challenge the two existing ones. Having come at an opportune time, Odili was to become their parliamentary candidate in his constituency, marking the beginning of a political feud between Nanga and him. Besides, Odili also had plans of his own on how to avenge the disgrace he had suffered  at Nanga's hands by bedding Edna - Nanga's second wife in the taking.

In the end, Odili with less money to hire thugs and buy out the people's votes was severely beaten such that he couldn't even file nominations to contest Nanga for the parliamentary, which even if he had done would have amounted to nothing, after the all the five villages - including his own village Urua - forming the constituency pledged their votes for anga, fearing that any opposition to Nanga's re-election would result in 'no development'.

Physically and emotionally broken, it took the intervention of a coup for Odili to effect his revenge, and yet when the time came it was no more a revenge for he had grown to love Edna. It should be noted that this coup was portentous for the novel was written before the first coup took place in the writers country - Nigeria.

This politically active novel has been described as a satire by a section of the reading public. Yet, categorisation of novels are influenced by reader's understanding and appreciation of events and their geographic location as I saw no such a thing. Perhaps such readers conflict the absurdity and mortally dangerous some of Odili's decisions were with satire. For in those periods when most African countries had been in their first half decade into self-rule and the early political elite were amassing wealth leaving national development unattended to, it took incorruptible people like Odili, Matigari (refer Ngugi's Matigari) and The Man (refer Ayi Kwei Armah's The Beautyful Ones are not yet Born) to challenge the establishment. And yes, such people had to make dangerous and somewhat 'stupid' decisions and this some may describe as satirical.

Yet are the politicians the only cause of their own corruption? Subtly, Odili provides pointers to those whose direct or indirect actions fan corruption amongst politicians. For instance, society has come to expect politicians to live a very different kind of life, one devoid of wants so that when one questions why a politician lives such an overly wealthy life, he is told that

... a sensible man would [not] spit out the juicy morsel that good fortune placed in his mouth (Page 2).

And the word 'politician' has become synonymous to 'good fortune'; the path to wealth and people would do anything to be associated with the fortunate few including forming gangs to fight for them when they are charged with causing financial loss or embezzlement in order that some of their wealth would personally rub on them - the Lazarus Effect. This was how Edna's father thought and expected:

Leave me and my in-law. He will bring and bring and I will eat until I am tired. And thanks to the Man Above he does not lack what to bring (Page 91).

Having said these, I did not feel bonded to any of the characters. I hated Odili for most of his decisions  especially the source of his epiphany. One tends to ask what if Nanga hadn't taken Elsie to bed, what would have happened? He most likely would have remained at Nanga's house and enjoy all his 'ill-gotten' wealth. For there were a lot indications suggesting that he was falling deeper and deeper into the same pit. And probably that was the point Achebe wanted to make, that we only realise how wicked these politicians are only when we have been personally hurt by them.

This book is already a classic. However, all who love to study the transition of African writing should include this in their readings or research. The beauty of this novel is that whatever had written in there is not past, is not history; it is unfolding before us this day in our various countries in various forms.
Author: Chinua Achebe Author's Country: Nigeria Novel Rating: 4.5 Review Year of Publication: 1961-1970