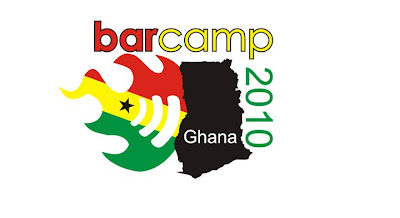 December 18, 2010 was the date. I participated in my first ever Barcamp. I have realised that ever since I started this book review and active blogging, I have moved from the hermit I was to become a socially vibrant person who is no more scared to share his thoughts. And I know, I can sometimes be vitriolic. That's my nature. I cannot suffer sycophancy or pure hypocrisy. I love ratiocinative thinkers.

For the first time, I met some of the faces behind blogs I have been following for a long time such as Ato of Mighty Africa, and Nina of Accra books and things. I also met twitter friends such as MacJordan, Nii Ayertey and more.

Barcamp Ghana brought together young individuals who have passion, ideas, and the zeal to let their ideas walk. It was not your usual Talk Shops where one went to sit and be talked to. At Barcamp, participants set the agenda they would want to talk about. People elect themselves to facilitate and no one imposes his or her ideas on the other, rather ideas are solicited and shared.

I participated in three sessions: Citizen Journalism versus Traditional Journalism facilitated by Bernard Avle of Citi FM and MacJordan; Telling the African Story facilitated by Obed Sarpong, Leila Djansi and Deborah Ahenkorah; and Blogging, which was facilitated by Oluniyi. I couldn't participate in those that were more germane to my professional life like Green and Renewal Energy (where I would have loved to listen to and talk about Green Agriculture) because some of these sessions ran concurrently. And when passion met profession, the former won.

Once we set these we become the very parochial people we have been blaming; the corporate media and publishing establishment which have uniquely defined Africa in such terms. Let every writer writes what he deems fit from his OWN perspective and not from BORROWED or ESTABLISHED perspectives. The African Story(ies) is nothing more than the African telling his own story. And it includes: Science Fiction by Africans (Nnedi Okorafor); Historical Fictions by Africans (Ayi Kwei Armah); Fantasy by Africans; Whodunit by Africans (Kwei Quartery, Nii Ayikwei Parkes). I promote African Literature and I define African Literature as any book (fiction or non-fiction) written by a person who was either born on the continent, is a naturalised citizen of an African country or can be linked to the continent through any of the parents. So that writers born and raised in outside Africa but are all inclusive.

Let me confess, I have never written any positive thing about Africa [why?] ... because I have not come across one.

Leila Djansi is a script writer, a movie director, producer and many others. Her beautiful movie, Sinking Sands, was premiered in Ghanaian in November. Her classy movies include I sing of a Well, The Rub and The Legacy of Love.

Don't be stupefied. Don't open your mouth like a zombie. I didn't make this up. And yes Leila is a Ghanaian. And yes she make nice movies. And yes she was a facilitator of a program organised by some GHANAIAN minds. Unless I am mistaking Ghanaians belong to the bigger class of people called AFRICANS, don't they? If they do, which I am not sure, isn't what she's doing a POSITIVE thing? Isn't the program she attended a POSITIVE thing? And I love her movies. The first trailer I saw of hers is I SING OF A WELL. Please all should endeavour to watch that movie and you would know that at least she's one positive thing about Africa, unless she had abjured her citizenship.

I have criticized the BBC, CNN, Al-Jazeera for the negative portrayal of Africans. I am not a sycophant to say that Africa has no problems. Far from that! Africa has a mountain of problems, the size of Everest. What I am and have been crying for is some coverage for the good too, in addition to the tonnes given to the bad. A little bit of this and a little bit of that.

But then here is a Ghanaian who has never come across anything good on the second largest and most populous continent. Here is a Ghanaian who has not written anything good about the continent. Who am I then to chastise the established media? Who am I to ask them to talk positive about my continent sometimes when my very sib does not? At least CNN has African Voices on which I watch interesting interviews and documentary on people like Soyinka, Adichie, Mandela and others. So CNN has at least heard of some positive thing on the continent.

Anytime we repudiate the many negative scenes on these institutions and castigate them for commercialising the legion of problems facing the continent, always think of the very people the money goes to to make such bland and ill-informed statements. Always think of the Ghanaians who write for these institutions who have never heard of anything positive on the continent. And always note that, most often, these positively blinded Africans are those who have had some form of Western education or have had some form of interactions with Westerners. I would quote a facebook status I wrote sometime ago (most of my facebook updates come to me spontaneously, so I keep the nice ones):

the [...] group of people are those who after minor interactions with another group see themselves to be suddenly inferior such that the only redemption for them is to lose themselves and become the others. Such individuals mostly emigrants to the West come home with the false belief that the West is the ideal toward which we must all strive (facebook update 13.12.2010).

However, this is our problem. The Ghanaian sets either an absolutely low standard or a high standard so that when the Black Stars qualified for the World Cup, a lot of Ghanaians said they would not go past the first round, when they passed the first round everybody was talking about winning the cup. We are like that, so perhaps Leila's comment was meant to ginger us to seek the positive, to make the positive ubiquitous so that one does not scratch his head when asked to list one million positive things on the continent. And that was what Barcamp Ghana with its focus on Creating Dreams, Thinking Smart and Shaping Future sought to do.

We meet again next year @Barcamp 2011, to deliberate on what we have achieved from our action plans. Note that Leila is organising a Book Drive, one of the positive resolutions that came out of the discussion, which seeks to donate books to deprived areas in Ghana. Please contact Leila if you have an old or new book you would want to donate. She does not accept cash, only books.
Article: Literary Blogging