51. A Heart to Mend by Myne Whitman, A Review 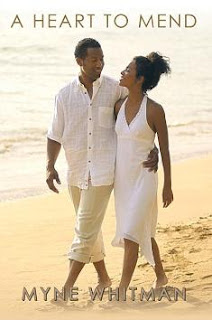 Last week, I wrote an article The African Story, where I bemoans the stereotypic mentality of publishers and vitriolically castigated the Naipaulic and Conradic tales of Africa. Had I read this novel first, perhaps I would have cited it as one of the bright stories coming out of Africa and specifically Nigeria. Myne Whitman's novel, A Heart to Mend, gave me the reason to hope and dare the vampires. It gave (and gives) me the patience that African writers would realise that their lives is not so abject and that for most of the time the people we see on TV and want to imitate are not our average Westerners. Yet, had Myne Whitman not self-published her novel, I wouldn't have had the opportunity of reading her, not that she sought out for established publishers right from the beginning. She chose the self-publishing option from the start.

In A Heart to Mend, Whitman created credible characters in the shape of Gladys and Edward Bestman. Gladys had just completed his Youth Service and has come to Lagos to wait on a job test and possibly interview. Gladys' auntie, Isioma, formerly married to a rich man, had neglected his brother, Gladys' father, and his sister-in-law such that even when the Gladys' father died, and the family wallowed in poverty, Auntie Isioma, never came to look for them. However, suddenly, Auntie Isioma wants to make amends; has written a letter to Gladys' mother to allow her daughter to stay with her while she hunts for the job and she really wants to make up to the family, but Gladys is not only interested in forgiving, that she can and would, but she wants to know the why - the reason a rich auntie could leave them to their fate for twenty years so that her education had to delay for a year.

Then Gladys met Bestman while in Lagos. Bestman has his past and it is one that he wants no one to know but it is also one that has shaped his belief system such that it shows itself wherever he went. What happens when Bestman met Gladys and his past came calling?

As someone whose readings of love stories is shallow, revolving around one book by Danielle Steel (Lightning) and another by Judith McNaught (Perfect), I was amazed at the pace at which I read this. I virtually read everything in a day, through my little baby's cries and my wife's calls. For about two-thirds of the book, everything seemed usual and I began wondering when something was going to happen. Then the turn came and I couldn't shut the PC down until I finished reading it at approximately 12pm.

In this story you meet the real Africa, or say the real Nigeria where there are entrepreneurs and decision makers, where poverty is not absolute. In this novel I could relate to the musician Tuface Idibia and his most famous song African Queen; I could see myself at the Silverbird Galleria and there were enough going on that would make the unaccustomed reader goes like 'does this also happens here in Africa?'. And Myne did a great job with the Stock exchange jargons. Though my knowledge does not extend to that area, I never found myself wanting, searching for meaning, for understanding, for above all these is the story of Gladys and Bestman. Also portrayed is the issue of rich-poor marriage and the expectations and deductions of on-lookers.


Though the ending could be predicted, when it came it was deeply satisfying. I am not one to love 'forever after' kind of novel that's why I never read any love story after Judith's Perfect, however reading what Bestman and Gladys went through fighting people who have suddenly popped out of his past, and people are bent on working against them, I was happy that it ended that way.

My only problem is that the novel would have benefited from one final detailed reading. Yet, one scarcely thinks of this as the story overpowers ones senses. Besides, I read an e-copy and it could possibly be the reason. And also, I believe Myne could have reached for more.

I would recommend this to all who love the Love Story genre, as I sit in wait of her second novel.