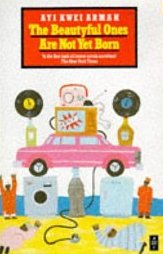 The Beautyful Ones are not yet Born is the fourth of Ayi Kwei Armah's novels that I have read and reviewed and I must say I have not as yet been disappointed by this great writer of our times. There is something I have realised and it is that his books are gradually being republished, not only by his publishing press Per Ankh, but also by other publishing houses.

The Beautyful Ones are not yet Born is set in the latter stages of Nkrumah's reign, in the country Ghana, and ended just after the first coup. It talks about 'the man' who, pure in heart and spirit, saw no reason to amass wealth through bribery, which, of course, has become the in-thing. It talks about the personal and emotional struggles 'the man' went through as he tried to convince his wife and mother-in-law that though wealth in itself was not evil but it is the means to its attainment that makes it evil. However, these two women in the man's life denigrated him, insulted him, and made him a useless thing, describing him as a nobody. They found love in his classmate who has now become a party man and so uses his position of influence to enrich himself. This man, Koomson, proudly displayed opulence wherever he went.

The Beautyful Ones are not yet Born documents, narratively, the period in Ghana when corruption became institutionalised and when one is judged by the wealth one has with asking how that wealth was made. People despised knowledge and revered wealth; thus, men would go any length to enrich themselves. It also talks about the period where not only physical corruption but spiritual, wealth and environmental decadence reached its peak. And it is yet to decline, for the situation still prevails.

In the story is a Teacher, whom 'the man' consulted anytime he had problems. It was this Teacher who guided the man to resist the torments of his wife and mother-in-law, whilst at the same time showing him that the path is not that rosy and things wouldn't change even now. The mental decay that characterised the period is seen through a lady called Maanan who thought that the coming of an eloquent man, who showed glimpses of learning and not just learning but having knowledge of the path, of having power not bestowed upon him by the white man, and when this man (reference to Nkrumah) failed her, she went insane. This is how the Teacher described Maanan's view of this new person, leader:

It is not true at all that when men are desperate they will raise their arms and welcome just anybody who comes talking of their salvation. If it had been so, we would have been following th first men who came offering words and hidden plans to heal our souls. But we did not run out eager to follow anyone. In our boredom we went out to the open public places to see what it was people were talking about, whether it was a thing we could go to with our hopes, or just another passing show like so many we had seen and so many we are seeing now. (Page 80)

The novel talks about the politics of the day, as a newly independent country sinks into the throes of corruption and the national coffers, wealth, treasure became a free for all scramble by men whose thought and learning rested and ended only within the grumblings in their stomachs.

there is something so terrible in watching a black man trying at all points to be the dark ghost of a European... (page 81)

The above quote reminded me of a similar quote in Ngugi wa Thiong'o's Weep Not Child, where Kamau told his brother that 'blackness is not all that makes a man ... a whiteman would always be a white man but a black man trying to be a whiteman is wicked..(to paraphrase)'. However, the author never lost sight of where power truly lies

We knew then, and we know now, that the only real power a black man can have will come from black people.

And how true can this be. Even today, in our advertisements, we seek the stamped approval of light-skin people. Our inferiority complex, borne out of our dark complexion, has pervaded our every move, our everyday lives to the extent that manufacturers and advertisers and politicians and the taxi driver and every other person would want to be seen associating with these individuals in order for them to be regarded as 'somebody'.

And even when the inevitable coup came, purportedly to erase corruption which, at that period, had become endemic in the life of the people and was synonymous to wealth and life itself, the author never gave in to the euphoric attitude of the few. He knew then that these are individuals who have also come to participate, greedily, in the national looting spree. One family has come, let another too come; and even today, in the politics of 21st Century Ghana, this mantra is used and abused. 'The Man' seeing policemen taking bribes at the numerous road blocks, after he has helped his friend, Koomson, escape from the military junta, walked home, head bowed, wondering when the 'Beautyful Ones' would be born.

The title of the novel, The Beautyful Ones are not yet Born, was an inscription the author saw written at the back of a car a policeman had stopped, in the novel. Yet it has its unique significance. In Ghana, as in most countries perhaps, car inscriptions are common. It is an art and also a way of knowing what the driver believes in or stands for. This inscription, which, according to the author in the June 2010 edition of New African magazine, saw in real life after he was looking for a title for this novel, is one of such arts. The industry of sign-writing is populated mostly by semi-literates and such petty mistakes in spelling abounds. Yet, even though it spoke literally to the driver or owner of the sign, in its misspelt state it was a spiritual message to the author. Thus, in its unwholesomeness it became wholesome, beautiful, intellectual, symbolic and above all meaningful in all its aspects. For in that period the only source of solace is to know that 'The Beautyful Ones' of Africa, those men who would stand corruption and fight it to the letter at the expense of their lives, leaders who have visions to take the country farther into development and not to 'see the true end of politics as wealth (Busia)', those who are spiritually in-tuned with the way and knows the path have not yet been born. This makes room that they would be born. Someday. For what is hope if the end is known. So I ask, Are the Beautyful Ones of Africa, The Healers?

The Beautyful Ones are not yet Born, set the premise for the succeeding novels of Armah. He began answering the questions he raised in this first novel. Yes, the Beautyful Ones in Africa are those who know the Way, the Path and not the Ostentatious Cripples; they are the Healers. All of Armah's novels address the way to freedom, to prosperity of the spirit, the environment and the mind. His novels are inter-linked and address similar themes in varied ways.

Some scholars have questioned the use of an un-named man, referred to simply as 'The Man' in a named country. To such folks I say, it is the apt thing for Armah to do. The Man is symbolic. The use of the definite article 'the' supposes that the attitude of this 'man' could be taken up by any specific person. It could be you or me but at the same times, he does not delude himself into thinking that they would be many and judging from the period where it was set, the use of 'the man' seemed even more applicable. He was a solitary man in his thinking. Besides, why shouldn't the country be named? The use of Ghana is good enough. Ghana at that point signified the hope of Africa, the beacon of hope, hence if the house has fallen, who are you to ask if the ceiling came with it? Corruption then was ubiquitous and for those countries that hadn't caught the the cold, it was only a matter of time.

This is a book that would rank high amongst my favourite books. When will the Beautyful Ones be born? Africa, when?

This is a highly recommended book.