October 08, 2010
I have known this for a while but wanted to let you in after some time. Some of my poetry pieces have been published in various anthologies. I summarise them below.
The War Against War: Poetry about stark realities of war

With contributions from poets in Ghana, Nigeria, Zimbabwe, USA, and India, the War Against War contains the voices of poets who represent a growing fatigue with aggression in the world. Each poem looks at war from broken windows - images are disturbing and the sentiments are gloomy. Each poet in this anthology wages a war against war with compelling perspectives.
Authors in the collection: Prince Kwasi Mensah, Lord God Almighty, Lila Mensa, Roland Marke, Cosmas Mairosi, Afegbua Shabban, Emmanuel Jakpa, Simbarashe Clever Kavenga, Tinahse Muchuri, Nana Fredua-Agyeman, Timothy Middleditch, Basanta Kar, Carrie Ann Thunell, Darko Antwi and Batsirai Chigama.
Whispers in the Whirlwind: A Collection of Poems about Socio-Economic Challenges in Africa

As a continent blessed with promise and plagued with problems, Africa has inspired tons of poetry for centuries. Such poetry were written by non-Africans and Africans who wrote from either a pro-colonialist or anti-colonialist mindset. It has been said that most poetry from Africa is political in nature. There is a reason for that. Our problems emanate from politics and socio-economic mismanagement. In Whispers in the Whirlwind, young African poets ventilate about the struggles that they, and their people, face each day, due to socio-economic and political stagnancy. This anthology's sole motive is to put on the recored what is happening and what must be done. The poets, who hail from several parts of Africa, speak to their leaders and their people about things lost, things forgotten and things that need to be salvaged. Whispers in the Whirlwind is a must-read for anyone who desires to see a better Africa, in spite of the many realities that act like hurdles in her path to progress.
Authors in this anthology: Prince Kwasi Mensah, Nana Fredua-Agyeman, Batsirai Chigama, Darko Antwi, Appiah Grant, Foster Toppah, Barbra Anderson, Asangba Reginald Taluah, Adjei Agyei-Baah, Jabulani Mzinyathi, Cosmas Mairosi, Roland Marke, Reggie Kyere, Lila S. Mensah.
We Come From One Place: Poetry about the ills of racism, sexism, ethno-centricism and nepotism 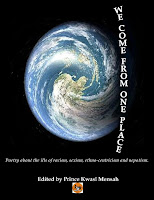 We come From One Place - Poetry about the ills of racism, sexism, ethno-centricism and nepotism is an anthology that minces no words about things that divide us in this world. With spectacular contributions from Nana Nyarko Boateng, Nana Fredua-Agyeman, Basantar Kar, Adjei Agyei Bahh, Roland Marke, Vivekanand Jha, Emmanuel Jakpa, Cosmas Mairosi and Lila S Mensah, the anthology serves as a constant reminder as to why we must remain united as one strong unit, not divided into weakened units. We Come From One place will challenge you to reevaluate how you treat another person; it will probe into your reasons for not enjoying the company of someone from another race or cultural background. The central theme in this anthology is humanity and each poet presents a compelling array of perspectives in their poetry.
About the Editor
Prince Kwasi Mensah was born in Accra, Ghana but presently resides in the United States of America. His poetry has been published in One Ghana, One Voice magazine, UNESCO's Other Voices Anthology and The Muse Literary Magazine. He has written over thirty books of poetry. Apart from being a poet, Prince is an author, playwright/screenwriter, actor and essayist. One of his essays, An African's Epistle to the Mosquito was included in Dike Okoro's Anthology of Contemporary African Writers. Prince is the Publisher and Managing Editor for Mensa Press, Associate Editor for One Ghana, One Voice Magazine and a member of the Wineglass Court Poets of Columbia, MD.
Anthology Editor: Prince K. Mensah New Publications Poetry