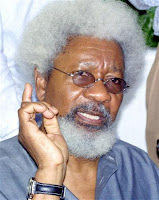 Blogging is going to be difficult for this season. I don't know the end of the season but its beginning I know of. Work is piling up in a certain geometric progression I cannot explain.

Less of the excuses. We continue with what was started last week concerning the profiling of the Laureates of African Literature. Today we profile Wole Soyinka, full name Akinwande Oluwole Soyinka.

Soyinka, born on 13th July 1934, is a Nigerian Writer, Poet and Playwright. After preparatory university studies in 1954 at Government College in Ibadan, he continued at the University of Leeds, where later in 1973, he took his doctorate.

Soyinka has played an active role in Nigeria's political history. In 1965, he made a broadcast demanding the cancellation of the rigged Western Nigeria Regional Elections following his seizure of the Western Nigeria Broadcasting Service studio. He was arrested, arraigned but freed on a technicality. In 1967, during the Nigerian Civil War, he was arrested by the Federal Government of General Yakubu Gowon and put in solitary confinement for his attempts at brokering peace between the warring Nigerian and Biafran parties. While in prison he wrote poetry on tissue paper which was published  in a collection titled Poems from Prison. He was released 22 months later after international attention was drawn to his unwarranted imprisonment. His experiences are recounted in his book The Man Died: Prison Notes of Wole Soyinka (1972).

As a dramatist Soyinka bases his writings on the mythology of his own tribe - the Yoruba - with Ogun, the god of iron and war, at the centre. He wrote his first plays during his time in London, The Swamp Dwellers and The Lion and the Jewel (a light comedy), which were performed at Ibadan in 1958 and 1959. Later, satirical comedies are The Trial of Brother Jero with its sequel, Jero's Metamorphosis (1973), A Dance of the Forests (1960), Kongi's Harvest (1965) and Madmen and Specialists.

Wole Soyinka, was awarded the Nobel Laureate in 1986.