Interview with Dr. Kwei Quartey, Author of Children of the Street

October 25, 2010
Dr. Kwei Quartey is an author whose interest lies in the Mystery genre. He has created the Inspector Darko Dawson's series, which uses the city of Accra as its background. The first in this series is titled Wife of the Gods. ImageNations set out to interview this author who has not forgotten the genre which most of us read and loved but which we least write on, especially by Africans.
1. Who is Dr. Kwei Quartey?
He's a new mystery writer who wants to be known worldwide in the same way people know Stieg Larsson, Alexander McCall Smith or Walter Mosley, and who wants to bring Ghana into reader's consciousness as a setting for mystery that competes on the same level as the US or Europe.
2. What motivates you to write? And why did you choose the mystery genre?
The first part of the question isn't easy to answer. It's like asking a stage or screen actor what makes him or her perform. It's an unexplainable urge to create an absorbing story and share it with as many people as possible. Do I have some neurotic craving for attention or some need to be admired? I don't know, and maybe I don't want to know either, but in any case the psychoanalysis is moot to me. Mystery is the genre I've loved since I was a child devouring Sir Arthur Conan Doyle's Sherlock Holmes novels. My attraction to mysteries may be just another manifestation of the same motivations that pushed me to become a physician. Every day in the life and work of a physician there's a mystery in the form of an illness the doctor must figure out in order to treat it. Perhaps I'm drawn to the challenge of deductive reasoning.
3. How many novels do you have to your credit? 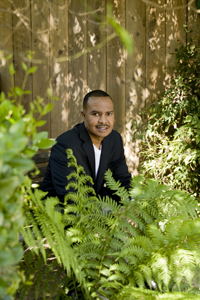 In the mid-nineties I wrote a novel called Kamila, set in 1950's Algeria and published by Vantage Press, which is a subsidy publisher. That means the author pays for the editorial and printing costs, a pretty ruinous route to take since very few authors will ever break even from the sales from a subsidy publisher. They provide no marketing or distribution and leave you in debt for a long time. Maybe I'll try to put Kamila on Amazon as a kindle e-book one of these days. But moving on, my debut Inspector Darko mystery WIFE OF THE GODS was released July 2008 by a "real" publisher, Random House, and the next Darko in the series, CHILDREN OF THE STREET, comes out July 12, 2011, also from Random House.
4. Which books did you find yourself reading whilst growing up and which are you currently reading?
I grew up in Ghana, and given its history as a British colony, the influence of British authors was strong. So in addition to Conan Doyle, I read a lot of British mysteries - Johan Creasey's Inspector West, and children's writer Enid Blyton, for example - but also some other writers like Kingsley Amis, whose book Lucky Jim is truly hilarious, Doris Lessing, James Joyce. In later secondary school, I read Achebe's Things Fall Apart as part of required reading for English Lit.
At the moment I'm reading some Swedish mysteries - no Stieg Larsson, but Henning Mankel. I like police procedurals. The Darko Dawson series are police procedurals.
5. Which writers have influenced your writing?
I can't point to a single influence, but I can tell you some authors whose voices I admire and only wish that some element of their skill would seep into my writing. Raymond Chandler for his marvelous single line descriptions that vividly capture a scene that I might use a whole paragraph to characterize; Both Arthur Conan Doyle and Dennis Lehane for their skill in creating a dark setting; Colin Dexter for the spine-chilling way he describes the moment when the detective realizes who the killer is, and Lynda LaPlante for her skillful interview scenes.
6. Are you targeting a niche market?
Inevitably, I suppose. But mystery and crime readers remain among the largest niches there are and certainly among the most passionate and enthusiastic.
7. How far have you been received as an author, in Ghana and abroad? And is your book available in Ghana?
Reception has been gratifying and in many cases even better than I had hoped. The novel is not widely distributed in Ghana and is therefore not available except perhaps in one or two bookstores. The reason for this is that only Random House owns the English language rights. For my next novel CHILDREN OF THE STREET, the English rights will be available to Ghanaian publishers, who can then print, publish and distribute the book in Ghana.
8. What do you intend to achieve with your writing?
Recognition. And I want to see my book at airports and bookstores worldwide. I also want to make Ghana well known to the world at large.
9. How do you find the time to write? Is there a special period of the day that you write?
I take time early in the morning, on weekdays when I'm off, and on weekends. Early morning is when I create best.
10. Tell us something about your upcoming book, "Children of the Street"
It's the second in the Darko Dawson series. In this story, Darko is caught up in the dog-eat-dog world of street children and finds himself up against a diabolical murderer who is always one step ahead. This book talks about the real and serious social problem of street kids in Accra, but it brings them to life as characters, not faceless, nameless statistics.
11. Do you think that authors have an important role to play in Ghana, or is their importance dwindling?
Their importance was never greater, in my opinion. So much is happening in Ghana at economic, social and political levels, so much to write about. There's wealth of material for fiction and we need talented people to write about it. The building materials are all laid out, we just need the construction workers.
12. Are there enough writers to take over from the Ayi Kwei Armahs, Atukwei Okais, Ama Ata Aidoos?
Not that I know of, but maybe I'm wrong. Maybe they're waiting in the wings on the verge of surprising us.
13. What should be done to develop writers?
Creative writing classes at all levels of education, and even if that may be difficult in some cases, English classes at school should encourage English composition and story creation. I recommend national writing
contests (when I was a kid in Ghana, I entered one sponsored by Clarks Shoes), and reading to kids is also important. There should be Saturday morning story time on the radio stations for children, and there should be serialized readings for adults of the great African fictional works, the same way the BBC has done for decades. There should be a call for literacy and writing by both government and NGOs. The same way Ghanaians have gotten hooked on religion, we want to get hooked on literature and writing.

14. How did you feel when you saw your name on the cover of the book?
Briefly elated, and then it was, "okay, enough ego - let's move on to the next stage: selling the book"
15. Any work in progress?
The next novel CHILDREN OF THE STREET is being prepared for release July 12, 2011. I have begun work on the synopsis for the third novel as well. I would actually like to put out 2 books a year, although that would mean fulltime writing and hardly any work as a doctor.
You can read more about the Dr Kwei Quartey here
Or follow him on Twitter
Author: Kwei Quartey Author's Country: Ghana Interview