One from Ghana: Powder Necklace by Nana Ekua-Brew Hammond and a Reading at Nubuke

August 12, 2010
I continue what I started yesterday, to blog five new and first time books from five different authors from three countries. Yesterday I talked about the duo from Zimbabwe: Tendai and Bryony. Today, I come home, Ghana. It is unfortunate that the volume of book publication (literary, not nursery rhymes produced in a corner shop) in Ghana has taken a negative turn and I hope that by the institution of the Burt Awards, new writers would be challenged enough to pick up the pen and put something delectable on paper.
Powder Necklace by Ekua Brew-Hammond

About the Author: "As a kid, I lived in Ghana for three years where I attended boarding school and encountered a small group of kids whose parents had also sent them to Ghana from Europe and the States. I wanted to write a book about that unique hybrid experience of being from two places at the same time, crisscrossing the globe to visit family 'back home' and on other dots of the map, and figuring out how to answer when people ask you where you're from--all while meeting the challenge of growing up" Nana Ekua Brew-Hammond.

About the Story: To protect her daughter from the fast life and bad influences of London, her mother sent her to school in rural Ghana. The move was for the girl's own good, in her mother's mind, but for the daughter, the reality of being a new girl, the foreigner-among-your-own-people, was even worse than the idea. During her time at school, she would learn that Ghana was much more complicated than her fellow expats had ever told her, including how much a London-raised child takes something like water for granted. In Ghana, water "became a symbol of who had and who didn't, who believed in God and who didn't. If you didn't have water to bathe, your were poor because no one had sent you some." After six years in Ghana, her mother summons her home to London to meet the new man in her mother's life--and his daughter. The reunion is bittersweet and short-lived as her parents decide it's time that she get to know her father. So once again, she's sent off, this time to live with her father, his new wife, and their young children in New York--but not before a family trip to Disney world.
Praise
"Brew-Hammond's colourful descriptions of Ghana and emotionally honest style capture the reader's attention from the first page" J.L. King, New York Times bestselling author. 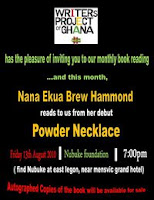 Book Reading at Nubuke: Courtesy of the Writers Project of Ghana, Nana Ekua Brew-Hammond would be reading her debut novel, Powder Necklace, at the Nubuke Foundation located behind the new Mensvic Hotel, tomorrow 13th August 2010. The books would be available for sale and yours would be autographed. Let's come together and help the authors. The time of the reading is 7 pm exactly.
A copy could also be obtained from Amazon