Winners of ImageNations' Book of the Quarter

October 16, 2009
A poll was conducted for all books that were reviewed on ImageNations from July to September 2009 and which had ratings of 4.5 or higher. In all nine (9) books excluding a book on poetry, Dimples on the Sand, by Henry Ajumeze and a non-fiction political book, Kwame Nkrumah: Vision and Tragedy, by David Rooney were selected. The poll closed today October 16, 2009 at two o'clock GMT.

In all there were fourteen votes and Half of a Yellow Sun won with 60% of the votes. This was followed by Purple Hibiscus, which won 21% and Two Thousand Seasons (14%). There were two collection of short stories: The Thing Around Your Neck (7%) and Mr. Happy and the Hammer of God (7%).

Brief Biography of Chimamanda Ngozi Adichie
Chimamanda Ngozi Adichie was born on 15th September 1977 in Enugu, Nigeria, the fifth of six children to Igbo parents, Grace Ifeoma and James Nwoye Adichie. While the family's ancestral hometown is Abba in Anambra State, Chimamanda grew up in Nsukka, in the house formerly occupied by Nigerian writer Chinua Achebe. Chimamanda's father worked at the University of Nigeria, Nsukka. Her mother was mother was the first female registrar at the same institution. 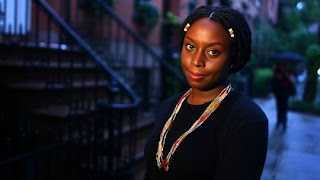 At the age of nineteen, Chimamanda left for the United States. She gained a scholarship to study communication at Drexel University in Philadelphia for two years, and she went on to pursue a degree in communication and political science at Eastern Connecticut State University.

Chimamanda was a Hodder fellow at Princeton University during the 2005-2006 academic year, and earned an MA in African Studies from Yale University in 2008.
________________
Note: All three of Chimamanda Adichie's novels have been reviewed on this blog.

Brief Biography of Martin Egblewogbe
Martin Egblewogbe presently lectures Physics at the University of Ghana and is also a PhD student. He is a poet, a novelist, an astronomist and many others. He is currently working on the Ghana Poetry project and a coordinator for the Talk Party, which is a fortnightly meeting of Poets and Literary folks. Martin has published numerous poems and short stories in different magazines and newspapers in Ghana and elsewhere. I interviewed the author Martin Egblewogbe on this blog. Click to read the interview.

POETRY
Only one collection of poetry was reviewed. Dimples on the Sand is Henry Ajumeze's first published hard copy poetry collection. Before this he had published many other poems at different sites and anthologies. He is first an Anioma citizen and then a Nigerian. His poetry identifies with his roots, Anioma, with poems littered with traditions and symbols of his people. He is more of a speaker for his people and writes as a matter of necessity.