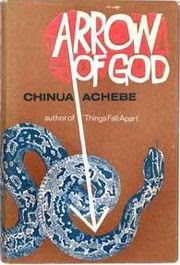 This is the last of the African Trilogy by Chinua Achebe. Unlike Things Fall Apart and NoLonger At Ease , Arrow of God was set in Umuaro in the years of the colonial period but some years after the Okonkwo era. It has very little to do with Okonkwo, except with the mention of the novel The Pacification of the Primitive Tribes of the Lower Niger, written by the District Commissioner and a slight reference to some incidents during  Okonkwo's era. All the same, one common thread that runs through all these novels is the clash between the coming of Christianity and the Traditional beliefs system and the complicity of the people in the former.

However, Arrow of God tells more than just the clash between beliefs. It tells also of how one man's quest for vengeance led to the destruction of a whole community (and the turning away from their gods) and to the madness of the Chief Priest. Ezeulu (Chief Priest of Ulu) felt his position as the Chief Priest of Ulu (the great god that is above all the individual gods in all the six villages and that has protected his people against the incessant conflict from the people of Abam) threatened when he was consistently challenged by some of the elders of Umuaro concerning certain decisions he makes. One of such challenges was when Ezeulu rejected  the idea of Umuaro fighting the people of Okperi over a plot of land that he (Ezeulu) considers rightfully belongs to the latter. 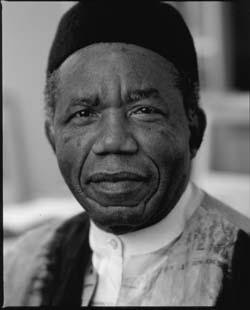 Hurt, confused and feeling challenged, Ezeulu schemed his vengeance against the people of Umuaro by refusing to name the day for the New Yam Festival implying that yams could not be harvested  and hunger would come upon the people of Umuaro. This headstrong attitude created an opportunity for the new Christian group led by Mr. Goodcountry to win members to his church promising them protection from Ulu and the chance to harvest their crops to overcome the hunger that has been wreaked upon them by their false gods.

To such extent did Ezeulu take his decision that his own household suffered the most as they became famished and had to also bear the brunt of the people's taunt and insults. Though Ezeulu claimed that he is only an Arrow in the Bow of God and that he cannot go against the will and decisions of the gods (which has resulted in the famine), the people of Umuaro blamed him fully for their woes; hence, his family became isolated and he himself became even more isolated. In his isolation he became internally broken and finally psychotic.

How was Ezeulu able to refuse to name the date for the yam festival? (Read to find out...don't want to spoil your reading).

In narration, Achebe made sure not to take sides and this is also seen in the earlier novels. There is  almost nowhere that one could see the narrator supporting this religion or the other. He just left things to take its course. However, the author seem to suggest that religion itself is very deceptive. Thus, most of the occurrences in the novel which were claimed by both religious sect were mere coincidences; such as the attribution of Captain Winterbottom's sudden sickness to his mistreatment of Ezeulu and the increase in church attendance which Mr. Goodcountry claimed was his effective pastoring. This deception was very conspicuous in the first two books of the Trilogy, especially in Things Fall Apart.

I enjoyed this book very much. The mixing of Igbo words with English words and the many proverbs; the beauty of the language in which the story was written; and the blatant portrayal of ignorance make this book a must read.