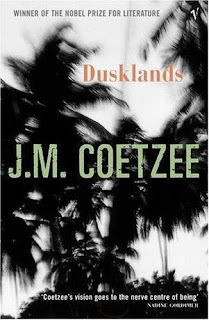 This is my first reading of a Nobel Prize Winner and I wasn't disappointed. Duskland consist of two novelettes: The Vietnam Project and The Narrative of Jacobus Coetzee.

THE VIETNAM PROJECT: This novelette was written or narrated in the first person and set during the Vietnam war. A psychologist Eugene Dawn developed a novel psychological war strategy to be used to win the remaining phases of the war. Having been asked by his supervisor, Coetzee, to revise his propaganda, Eugene criticised himself so much that he was overtaken by the stress of the work and finally ceded to a mental breakdown.

It is an interesting novelette and shows that the casualties of war are not only those whose bones fill the belly of the earth but include those whose mental constitution succumbs to the stress of war. Coetzee's (the author) narrative is compelling filled with reality to such an extent that the reader would keep guessing whether what is being read is real or fictitious.

THE NARRATIVE OF JACOBUS COETZEE: This Coetzee is different from the Coetzee in the first novelette and from J.M. Coetzee the author. The Narrative of Jacobus Coetzee was set in the year 1760. Coetzee (the character) narrates his travels through the territories of the Namaqua Hottentots with his cattle, horses and slaves.

This is a story that shows or put into perspectives man's love for savagery and for oppression. As Coetzee came upon the Namaqua Hottentots he presented them with the gift of tobacco and copper as he had heard many such travellers who have travelled through the region do. Yet, the Namaquas' reaction to his gift and the fascination with which he was held was so unexpected and out of the order of 'human' life that Coetzee perceived them to none other than barbarians and savages. He therefore treated them as such, threatening to shoot to kill if anyone touches his wagon. His description of the people showed no respect and he put them on equal footing with animals.

Yet the novel clearly shows that it was Coetzee who was a savage for after the people of Namaqua had treated him of his sickness and him showing no respect to them, they cast him out to go his lonely way. Losing five of his six slaves infuriated him most and increased his resolve for vengeance. As he made his journey back home and Coetzee reflected on what has happened to him and realised that he has retrogressed from a 'well set elephant hunter to a white Bushman'; yet to him this retrogression was insignificant and insignificant also was his treatment by the Namaqua people. It was on the journey back with Klawer (the remaining slave) that the bond and respect between master and slave dissolved, for when Klawer the slave fell sick Coetzee carried him on his back for most of the journey back; but in the end he left him to his fate promising to come back for him, which he never did or was not recorded.

Coetzee travelled back to the Great River to execute his vengeance by savagely killing all his slaves who deserted him and some of other Hottentots. The way and manner in which he ordered them to be killed or were killed by him and the happiness and satisfaction he derived from these killings fit  his own definition of savagery as

"... a way of life based on disdain for the value of human life and sensual delight in the pain of others."

It was interesting to note that the Afterword and the Appendix (which was an exposition by the Councillor) both highlighted the positive parts of Coetzee's adventures leaving out his massacre of the Namaqua people. This is a way of saying that such people do not matter.

The narration is different from most narratives I have read. I can't point out what it is I liked about it but it was really a good read but it was also short and the plot was not tight. The climax was not as sharp as it should have been. It was a terse narrative. I would recommend this to all. Though the first novelette has nothing to do with  Africa the second does.