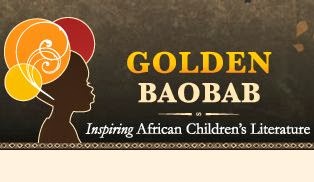 Golden Baobab has announced the winners of its 2013 Prizes. One hundred and eighty (180) stories were submitted to this year's Golden Baobab Prizes. Of these, 25 made it onto the the longlist and 8 to the shortlist.

Liza Esterhuyse, winner of the 2013 Golden Baobab Prize for Picture Book. Liza is a qualified occupational therapist who has a Masters Degree in Early Childhood Intervention. Liza is many things: a daydreamer, a book junkie, a red wine drinker, a world lover, a tree hugger, a dog enthusiast, a horse admirer and a Capetonian.

The Little Hippo: Faraway in the savannah a little hippo sighed. The rains were late and the hippo-pool was getting very crowded. Then he notices the wildebeest, zebras and antelope gathering for their annual migration and he decides to join them. However, the little hippo quickly realises, that the journey is not as esy as he thought and it's filled with danger. Luckily, he meets friends along the way who help and guide him through the migration.

Karen Hurt, winner of the 2013 Golden Baobab Prize for Early Chapter Book. Karen is an independent writer, editor materials developer and writing workshops facilitator who lives in Johannesburg. She was born in Zambia where she spent her early childhood before moving to South Africa. Whenever Karen can carve out the time, she loves to slip into her 'other world' and write fiction.

What's Going on at 179 Jabulani Street? (Summary): Jama's life is upside down and going down further until he reluctantly accepts the pink jacket his father insists on buying him from a secondhand clothes seller on a freezing evening in Hillbrow, Johannesburg. He finds keys and an address in Yeoville in the pockets. This is the beginning of a dangerous adventure that leads to a new friendship with a girl called Sophie who Jama discovers the jacket belonged to. Parting with the truth when it comes to telling their parents what they are up to, Jama and Sophie discover a Mozambican craftsman at 179 Jabulani Street who has been trapped in the rhino horn trade by a fierce poacher. They come up with a plan to help him escape and get the syndicate bust. Along the way they make partners with and inherit a dog they rename Licks.

Kanengo Rebecca Diallo, winner of the 2013 Golden Prize for Rising Writers. Twelve year old Kanengo Rebecca Diallo lives in the city of Dar es Salaam, Tanzania, with her mother, Nuru, her father, Anthony, and her two siblings. Since she was eight years old, Kanengo's dream has been to become a world renowned author of books and if lucky, best-selling books. Kanengo discovered that she has a unique talent of drawing manga or anime comics. Usually when she writes her stories, she turns them into anime cartoon drawings.

Pieces of Africa (Summary): This is a story about four children with diverse backgrounds who are from different parts of Africa. They are chosen to find all the magical puzzle pieces scattered around Africa in order to save the world. They all came from a long lineage of puzzle finders that started since the beginning of time but in trying to find the pieces, all their ancestors failed and died. Now it was up to them to gather all the pieces within a set period of time or else they, and the whole world, will perish.