265. Permit for Survival by Bill Marshall 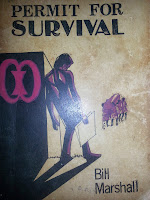 Permit for Survival (Educational Press and Manufacturers Ltd, 1981; 120) by Bill Marshall is a humorous book that captures the socioeconomic life of Ghanaians in the late 1970s and early 1980s. It acts as an aperture through which the reader could observe the sights and sounds of a city bourgeoning with hope, opportunities, aspirations, struggles, squashed dreams, and unsurmountable challenges. The book has recently been released under the title Brother Man.

The story opens with twenty-six year old clerk Joseph Jonathan Kofi Kuma, or Jojo as he was affectionately called, faced with the arduous task of preventing his own burial at Anoati, his hometown, after he saw his obituary and funeral announcement in the newspaper. The story tells of the misfortunes that befell him on his journey and after. After the success of this unimaginable quest - similar to some of those embarked upon by Tutuola's Palm Wine Tapster, though not in its mysteriousness - Jojo had to prove to his bureaucratic boss, with documented evidence, that he was not dead. Initially, it seemed all too simple; a mere letter of affidavit and the case was solved. However, as he discovered later, nothing was simple when it came to dealing with people in the civil service.

From one happenstance to another, Jojo moved on to become an electrician - fixing air-conditioners, and repairing other electrical gadgets - for a living. Together with George, his compadre, they moved from one relationship to the other and from one job to the other. One of these relationships found Jojo and Captain Ben Tuo, a military braggart who drew his power from the junta that ruled the country, sharing the same lady. Laura had introduced Jojo as a cousin and the two had become pals.

If the first part of the book dealt with the troubles and exuberance of Jojo, the second part was about his transformation into a matured and responsible man, dealing with love and friendship. Jojo had met Karl - a German on holiday - at a drinking pub; the two struck a friendship that would see them travelling and having fun across the country. It is also the period where Jojo finally settled down with Mina, her laboratory technician girlfriend.

Through the lives of the characters, Permit for Survival reveals the changes that were taking place in the Ghanaian society such as the changing perception of how beauty is defined (fat people no longer preferred), the gradual shift towards nuclear family (activated by the economic realities of the times and education), and the increased demand by women to have their say in marriages and in life (women empowerment). In some way, it marks the point at which the fundamental principles that governed society began to change.

Regardless of the frivolity that marked Jojo's initial life and the sweeping fun he enjoyed, the political tension of the time, resulting from the military rule, was felt in the story. There were politically-motivated arrests like that of the lecturer Dr Mante, who was never tried but released only after a counter-coup; there was a widespread student unrest and demonstrations; and general dissatisfaction among the people, resulting from worsening economic conditions.

The story opened with so much promise of adventure and suspense. This promise could be discerned even from its title. The humorous and insane tale of a man on a journey to prevent his burial and funeral inflamed it, heightening expectation. But the end of that journey marked the end of that promise. Bill was unable to sustain the initial verve, thus settling down to the story of a life of a young man eager to live.

However, whatever the story failed in, it made up for its ability to capture, albeit fleetingly, the almost complete life of the people at the time, allowing for comparison and the possible measurement of progress. Bill balanced the competing atmosphere quite well. He neither over-elaborated on the breakdown of government nor did he exaggerate the seemingly joyous life of Jojo, Karl, Mina, and George. They were humans who could find happiness even in bad times, and who were not immune to the vicissitudes of life. Bill did not take upon himself the duty of a moral analyst or an economic historian; he made no judgement and drew no conclusions, as some books set in the period did. He showed that life does not come to a standstill because certain parts of society refuse to function fully and completely as expected. These are the strengths of this novel.

Bill seemed to have touched on every dimension of the country's node of happiness and identity - from its rich culture (Aboakyere (Deer Hunt) festival at Winneba; a durbar in Kumasi; naming ceremony of Jojo's child) to the night-life in Accra and visits to the country's major installations that used to be attraction points, like the Tema Harbour to the Akosombo Dam. There were parts, which would have been raunchier had they been written two decades later; however, this is expected of a Ghanaian novel written in such a period.

The point of view changed after every chapter from the first person to the omniscient narrator. This style may seem too rigid and unnecessary; nonetheless, it afforded an insight into the lives of Jojo and of the country. The entire story is like beads strung on a thread, each bead representing a distinct tale in the story. This is a fast-read and does not task the reader.
_____________________________
About the Author: Marshall, Bill Okyere (1936 - ), is a Ghanaian dramatist and novelist. Marshall was educated at Presbyterian schools and later attended the Guildhall School of Music and Drama in London. After studies in television, he spent a period in the USA during which he composed the play The Son of Umbele (1973). During the early 1990s, he was both head of the National Film and Television Institute in Accra and Lecturer at University of Ghana's School of Performing Arts.

In addition to writing for the theatre Marshall has written radio and television plays, and his novels include Bukom (1979) and Permit for Survival (1981). His stage plays show the influence of such writers as Ibsen Chekhov and an awareness of the discipline advocated by William Archer. His work challenges the notion that all can be explained, all actions accounted for, hinting at the legacy of the African past. [Source]
Author: Bill Marshall Author's Country: Ghana Novel Rating: 3.0 Review Year of Publication: 1981-1990