239. My First Coup D'etat - Memories from the Lost Decades of Africa by John Dramani Mahama 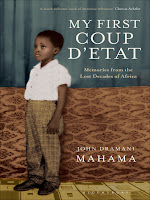 My First Coup D'etat - Memories from the Last Decades of Africa (Bloomsbury, 2012; 318) by John Dramani Mahama is a memoir spanning the period of his childhood to the time he arrived from Russia after his postgraduate degree. Though this is a memoir of the author, it is also his memories in relation to his family, his country - Ghana, and Africa as a whole.

John Dramani Mahama talks about his childhood experiences in all the places he has lived - Damongo, Busunu, Accra, Tamale, Nigeria, and Russia. However, the major subject that runs through this memoir is the numerous coups that plagued the country and the continent during the period and their effects on him and his family; but more especially the effect of the 1966 coup that toppled Nkrumah's government of which his father was a Minister of State.  Mahama's father was among several other government politicians who were arrested and detained after the coup. The most conspicuous effect of the author's father's arrest and detention was how Mahama, then a seven-year pupil of Achimota school, was left stranded at school when school had vacated and all pupils had gone home, because the coup and his father's subsequent arrest and summary detention meant there was no one to pick him up. Even more worrisome was the fact that when he came home with his school-mother, the house they lived in was under military guard and both he and the woman had to go back and find other solutions. This is indicative of the fact that repercussions of coups go beyond the immediately observable incidents - the deaths; it also has its psychological effects on completely unsuspecting individuals.

The family was to be again affected by two other coups. The effect of Acheampong's coup was mixed. The author's father who had by then gone into farming after his release from detention, because he had been banned from holding any public office for a decade, benefitted significantly from Kutu Acheampong's agricultural policies of Operation Feed Yourself and Operation Feed Your Industries. E.A. Mahama, the father, got closer to the military leader through the success of his rice farm, which won him several best farmer awards. However, when he, the father, personalised the friendship and sought to advice the leader that it would be prudent to leave when the 'applause is loudest', the military leader took it differently and E.A. Mahama was 'taken in' for questioning in an attempt to unveil the motive behind this unsolicited advice. However, it was the Rawlings-led Coup of 1981, overthrowing Hilla Limann's government, that pushed E.A. Mahama, who had become a leading member of that party, into exile. Having promised never to go to jail, his children whisked him away into neighbouring Cote d'Ivoire when his name was mentioned among the names of individuals who had to report at the barracks 'for their own safety'.

There is some ambiguity in Mahama's (the author's) life as described in the book. On one hand his home was better than the average Ghanaian - thus, one could - in the context of Ghana - say that he was a privileged child, regardless of the ups and downs that came with it. However, his individual life - isolated from that of the family, was average. He talks about his love for a neighbour's daughter and how he felt anytime he saw her, before they became friends. His descriptions of his heartbeats and sweaty palms could be shared by many an individual. And the emotions that burst out when he managed to gather enough courage - albeit through his friend who was also the girl's brother - to express his love for her was well captured. Here Mahama's eye for details came to the fore. Exchanging perfumed letters and reading over and over again, as if each reading will reveal a different meaning, are activities that could be shared by many. Though some of his childhood memories or events are location-specific, most could be shared.

One of the effects of the coup was that the author had to move from Accra to Tamale, which also led to a change in school. Mahama developed his interest in politics, especially his socialist ideology, early in his secondary school life. He was among those who campaigned against Acheampong's Union Government at Ghana Secondary School. This interest in politics - or more specifically socialist ideological thoughts - was developed by his teacher-friend (Mr Wentum). His interest in politics continued at the University of Ghana where he stood, won, and became the secretary of the Student Representative Council, after he had lost the position of Vice President of the Junior Common Room the previous year. Ironically, it was in Russia where he came into direct contact with practical socialism that he was able to reconcile his socialist ideas and its quest for a classless society with his fathers rice farm and processing factory (a capitalist venture with profit motive). Prior to that his socialist ideologies, theoretical at the time, did not fit his father's rice-farming and processing venture. But in Russia, observing the desperateness of the people, he realised that the extremes of both capitalism and socialism would not create the type of world we want to see.

This memoir's motive, perhaps, was to highlight Africa's turbulent past, a past fraught with coups, coup-plots, and counter-coups, a past where a lot was lost because countries could not find their feet, because the continent was entangled in ideological fights, which was also clearly a fight for world-control.

Like all memoirs this is a selection of memories the writer wants to share. However, one either has to drink deep or taste not the Pierian spring. What was clear was the major gaps a casual reader will likely not miss. For instance, little was said about his life at Ghana Secondary School - part from his relationship with his Mentor Mr Wentum; yet it is not lost to us that secondary school presents the platform for the most delinquent and memorable occurrences. It is where all recklessness take place and whose experiences remain on our lips until our dying day. Also missing was most of Mahama's life at the University of Ghana and his life in Russia. His experiences in these areas would have enriched the book further.

However, one cannot help but note that My First Coup D'etat also excludes the President's active political life. And it is in this vein that I sit in the hope that there is a second book to cover this period. In fact, the author himself stated in the blurb that he is working on his second book. But we can also be sure that this would not be completed anytime soon. Mahama's decision to put down this memoir needs to be appreciated and encouraged, for very few presidents write memoirs, especially those on the continent, and fewer still largely-write it themselves. Aside Kwame Nkrumah, who authored several ideological books, the other leader who had self-authored a book could possibly be Dr K. A. Busia.

Yet, no matter the volume of deletions and cut-outs one will make in a memoir, they are the key to understanding and knowing a person, if one reads between the lines. It is for this reason that one must read such books. Mahama's book is fun to read, albeit somewhat incomplete. It shows one who accepts his limitations, the boundaries of his knowledge and the fluidity of life. He tries to avoid the subtle trap of epistemic arrogance that inundates leaders and make them believe they are the Only One who what their country needs. In avoiding this, he believes that one need not rush into making decisions which would have far-reaching consequences. Some may take this as a weakness; however, like the proverb says dwen hwe kwan (let your thinking light your path (or let thinking lead you)). 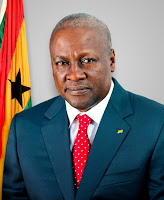 ____________________
About the author: John Dramani Mahama is a writer, historian, journalist, communication expert, former Member of Parliament, Minister of Communications, and Vice President.

John Dramani Mahama is currently the sixth President of the Fourth Republic of the Republic of Ghana. He first assumed the office after the untimely demise of the then President John Evans Atta-Mills, on July 24, 2012. He was elected President in the December 2012 elections and was sworn into office on January 7, 2013 for a four-year term.
Author: John Dramani Mahama Author's Country: Ghana Memoir Non-Fiction Rating: 4.5 Review Year of Publication: 2011-2020