Bombay's Republic looks at war and its aftermath, especially the psychological effect of a war fought for an unknown cause in an unknown land. Bombay, the main protagonist, has returned from Burma where he had fought at the 'Forgotten' front of the Second World War. But Bombay had not returned quietly and innocently and wholly as he had left. He has come back to his village in Nigeria as a man transformed, with scars all over his body and also with silence. Upon his arrival he has made it a point not to tell any of the news-seeking folks the ordeal he went through in the war and how prejudice against him helped saved his life. He has refused to tell these adult folks how tiger-leeches stuck and sucked out his blood as they waded through rivers; how his comrades were caught in traps that snapped off their heads and carved through their bellies. He has not told anyone any of these including several acts of bravery that earned him three medals of honour including the prestigious Victoria Cross which is awarded for 'conspicuous acts of bravery.' However, what Bombay has refused to tell the adults he has not denied the young - infusing his stories with tall tales.

Bombay's participation in the war exposed him to several realities of life. The first is the quest to be independent and this he would become regardless of the colonisation yoke still hanging across the neck of his country. The other reality, which in some way paved the way for large-scale freedom struggles and which is the basis of the former, was that the ilks of the District Officer could also die and could utter complete nonsense. Thus, they are not the all-powerful folks they make themselves seem to be. They are not immortals. In fact, his killing of one earned him that enviable third medal - Victoria Cross. And he had seen one descend into insanity after denigrating every member of his battalion. So when Bombay acquired a disuse jail-house and turned it into his republic - Bombay's Republic - he declared his vicinity independent and therefore avoided paying taxes and property rates to the local government, in the hands of the colonialist. His possession of a gun and his assumed invincibility together with his acts of bravery saw him through. And it was behaviour such as these and more that pointed to a man completely transformed by his participation in a war; for his transformation is not only the body marks that turned him into a spotted leopard but there was a mental and emotional transformations as well. And the latter was the most significant.

Mirthfulness - such as the soldier who descended into delirium - and pathos - such as Bombay's own descent into partial insanity - punctuated this beautifully written story; there were several brilliant lines that is bound to cling onto the minds of readers. The imagery employed by Babatunde made some areas grisly and scatological. Yet, this is required for the only constant in war is grisly deaths and scatology. Babatunde has written a story that shows - though not its main objective - the role of Africans in the Second World War, something that has either been silent or been down-played by most historians. Sometimes watching documentaries and movies on this war, one is tempted to think if there was an African presence in it at all.

Another inventive method employed by the author was the reference to Okonkwo in Achebe's Things Fall Apart. Some readers might see this reference as merely a link towards the popular, an attempt to hang on to - at all cost - the shoulder of the more established, widely known story of Okonkwo for popularity's sake. A reader who comes to such a conclusion might not be far from wrong; but this reader would also find that the analogy that brought in Okonkwo worked well in the story and was germane to it at that point, most especially because the reference wasn't to a novelist's character but to one who lived and did what was ascribed to him.

Does this story deserves its place in the shortlist? Perhaps. It's an interesting read and got me laughing at several places. The author set out to describe a man affected by a war he was indirectly conned to participate voluntarily. He shows what the ravages - emotional, psychological and physical - of war could possibly be, on the individual. However, stories of the whiteman's weakness having been discovered through Africans' participation in the WWII abounds in several stories, including Daniel Mengara's Mema. Similarly, the idea of creating a Republic within a country was thought of and achieved by Fela Anikulapo-Kuti when he established his Kalakuta Republic and made it a no-go area for the authority until it was raided and burnt down by the Obasanjo's men in uniform. Regardless of these, Bombay's character is unique for having fought in a war he came home to live in a jailhouse where he was the sole citizen, who won all the elections he alone organised and voted for the only candidate that was himself. Is this a reflection of freedom fighters taking over the reigns of office and becoming its sole rulership until death do them part? Or is this whole story a metaphor for that species of leaders that abound on the continent? However, it shouldn't also be forgotten that Bombay gained his independence before the country as a whole; hence this could also be philosophical interpretation to the story. 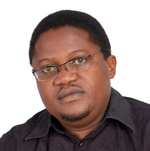 ______________
About the author: Rotimi Babatunde's fiction and poems have been published in Africa, Europe and America in journals which include Die Aussens des Elementes and Fiction on the Web and in anthologies including Little Drops, Daybreak on the Land and A Volcano of Voices. He is the winner of the Meridian Tragic Love Story Competition organised by the BBC World Service and was awarded the Cyprian Ekwensi Prize for Short Stories by the Abuja Writers Forum. (Source)
Author: Rotimi Babatunde Author's Country: Nigeria Caine Prize 2012 Shortlist Rating: 5.0 Review Short Stories Single Stories Year of Publication: 2011-2020