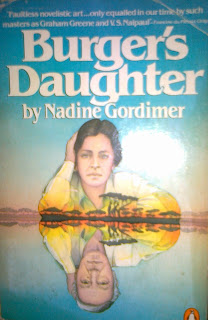 Nadine Gordimer's Burger's Daughter is not an easy read. The author, probably mirrored the lives of the people: natives and the whites who were against the apartheid system at the time, in her prose. For reading this seemingly melancholic novel, the reader would feel the desolation, the destruction, the emotional torture, the emasculation of ideas and of works, the impotency of one filled with verve without a vent or valve. The reader would go through several tortuous moments, reflecting the lives of a people who would not bend to division, destruction and death no matter how well it is shrouded and how white the shroud is. And these feeling of pain, emanating from the book, does not result from the use of verbose adjectives or adverbs but the use of language itself. The pain is in the read. In this book, Gordimer, somewhat answers partly a question that has been bothering some observers of South African apartheid system and which was also the centrepiece of Steve Biko's I write What I like; the question of whether the South African Liberals, those who vociferously and vituperatively spoke against apartheid, were for real and why they never forwent the privileges that were preserved specifically for them. Fictitious as this story may be, it still shows that there were several white South Africans who were willing to brave death to see the collapse of that vile and humongous system than to live and partake of it.

The book explores the issue of struggle and what it takes to be the child of a revolutionary father and more especially a white revolutionary fighting and dying for policies and laws, changes that would benefit blacks. It also explores the loss of childhood that most of these fighters and their children go through; how they suddenly become adults, unbeknownst to them, and how the struggle charts their lives. Another question, more importantly a puzzle, which is currently been portrayed in the Kony 2012 Campaign, which the book attempted to resolve without seeming success is the issue of the equalness of human value. Most of the time, an issue becomes a concern to the world - or the international community as they are referred to - only when a single white person has been subjected to it, regardless of the fact that those prevailing conditions, of which this white individual suffered, is the reality of several non-white folks, in this book, blacks. For instance, when Lionel Burger - Rosa Burger's father - was jailed for life for his alleged treasonable conduct and died in prison, Rosa Burger became a star attraction at most of these human-rights-freedom-fighters-liberals luncheons and dinners, even though countless blacks had suffered similar fate. This issue converges into the suspicion that blacks harboured even for whites who could be seen supporting or working for their cause. It is also that which makes the black men in the police be seen as victims of circumstances and therefore not part of the enemies that white policemen were.

Gordimer also investigated what it takes to be a clean-conscience white South African and if such a thing is possible regarding the prevailing conditions. Here, she was much more concerned about the sins of the fathers following the children; how people would perceive an individual - a white - who says he or she is a South African. Do people link you to the atrocities taking place? Or would they treat you in isolation? This identity-burden is one of the themes covered in the story.

The story, written in different narrative styles alternating between an omniscient narrator and Rosa Burger's own first person narrative, is divided into three parts. The first part concerns Rosa's parents and her life in South Africa. Her parent's involvement in the fight against apartheid, life in their home, and their visit to and from prison and sometimes imprisonment was the subject. Rosa's home was teeming with blacks and whites. It was a place - even when the separate places policies was in full swing - where the race border breaks down. Even though the Burgers lives were not like other white South Africans, they had to contend with every day mishaps life showers on people. They went through the loss of a young son and friends and betrayal. However, Cathy and Lionel stood firm in their belief in their chosen paths. Even then young Rosa understood, without any indoctrination, what her parents were doing and accepted it. In the first part, Rosa's narrative mostly addressed a man she had a brief affair with, Conrad. When her parents were alive, she felt shielded, somewhat, and even participated in some of their clandestine activities. During this period, she never thought of leaving the country, and because she had been named together with her parents she was not entitled to a South African passport. Outside the Burgers' home, they had to contend with state policies especially in public institutions over which they had no control; so that even though Rosa and gone to school with Baasie, Lionel's black comrade, the two had to separate as they moved from the kindergarten/primary stage. An event that would later come to haunt her in faraway Europe. After her father died in prison and her mother died from a debilitating disease and the house was sold, Rosa would move from one place to the next until, a few years after, she would decide to leave South Africa, altogether. Rosa had worked in South Africa as a physiotherapist.

The second part deals with Rosa's foray in Europe, mostly France and how she deals with her father's first wife and life in general. Here her ability to stay away from liberal activities will be tested. Rosa will have an affair with a married man (her first lover), working on his doctoral thesis; however, this will not be the defining moments in her life. The defining moments would come when she met Baasie at a programme organised by liberals. In this chance encounter, when Rosa was not able to identify his childhood friend, sparks would fly for definitely Bassie, whose father had also died in prison, had gone through several transformations whose complexities have, probably, been exacerbated by his colour. Baasie's accusation of Rosa was based on her using her father's death as a launch-pad for fame and that this is a singular event a white man suffered; an event that is the reality of countless whites. Fumed by this clearly abrasive accusation Rosa countered and enumerated all the sufferings they had to bear for what they believed in. But it would not be what Baasie said that would get her visiting South Africa, it would be what Rosa herself told Baasie. Rosa's narrative, in this section, addressed her father's biographer.

The third part is when Rosa came back to South Africa. She went to work as a physiotherapist but the activities of her father, and the name Burger and her inability to dissociate her personal struggle from the overall struggle that would come haunting. In 1976, the Soweto uprising was in full force and the police also met them fully prepared. What followed were countless mangled bodies and broken bones. A year later, Rosa would be arrested and charged for her participation in advancing the cause of the ANC and inciting the revolt. Rosa mostly called unto his father, in this period.

Gordimer's creativity was at its best. She unleashed the full force of her creative prowess, and gave the reading public the beautiful narrative that would, if it had not already, become a classic. Yet, what this book achieves is not the beauty of prose or lines, but the documentation of a period of life in the lives of a people that need not be repeated, no matter what.