Hitting Budapest is the winner of the Caine Prize for African Writing in 2011. The story is about five young girls, mostly pre-teen, moving from their shanty town of Paradise to the estates of Budapest in search of guavas and anything that matter. As they make their journey towards Budapest they converse as all children do. It is through this that we get to know that Chipo, a girl of ten years, has been impregnated by her grandfather.

At Budapest they met a white woman of 33 years who had just come from London, eating ice-cream. They looked longingly at this ice-cream only for her to throw what is left of it into the dustbin and take a picture of them. On their way back they shared their dreams with each other: to travel to America, get big houses and cars. Whereas IMF is a street at Budapest, AU is a street at Paradise, the shanty town.

Back at Paradise, the children went to ease themselves in the bush where they saw a woman dangling from a rope - a possible suicide. The children decided to remove the shoes the dead woman was wearing and sell for it for bread.

Initially, this story reads as a metaphor where some Africans in search of better lives travel abroad. Again, Paradise and Budapest represent the economic duality that we have in most countries where extreme poverty exist side by side with all the skyscrapers and glass-houses. However, as the story unfold, the metaphorical view changed.

As the children journeyed in search of guavas as food, they discussed Chipo's pregnancy. Most of them did not know how babies are made with some thinking that God puts it there. However, these same children knew about terrorists who hijack planes. They also know that most people who go to America clean poop in nursing homes. I found this a bit difficult to take.

Like most of the winning stories in the Caine Prize for African Writing, there was defilement, poverty, extreme hunger, dejection, and many more. Whereas some readers, including myself, have bemoaned the trend of the winning and shortlisted stories others have equally embraced them. Irrespective of my belief that even such stories could be written in a different way or from a different angle to make it new, this story reads nicely. The story can be read here.
______________________________ 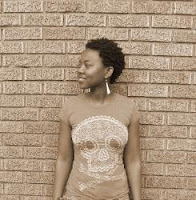 Brief Bio: NoViolet’s stories have won the 2011 Caine Prize for African Writing and shortlisted for the 2009 SA PEN Studzinsi Award. Her work has appeared in Callaloo, Boston Review, Newsweek, The Warwick Review, as well as in anthologies in Zimbabwe, South Africa and the UK.