126. The Conservationist by Nadine Gordimer 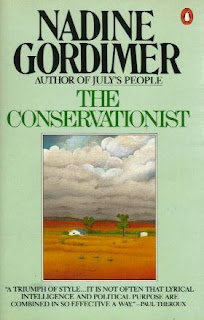 Mehring is rich, divorced and somewhat frustrated and, though he has a lot of highly-placed friends, he feels alienated. He also deals in pig-iron, so he doesn't classify himself as part of the oppressors regarding the use of cheap black labour in the mines. But Mehring has a farm as most rich South Africans do. In the context and setting of the story, rich is synonymous to white. Though Mehring has a farm, he does not run it for profit. He sees the farm as a place to escape to from the city and he knows nothing about farming so that blacks like Jacobus and Solomon and others are the ones who run the farm and these individuals were living on the land before it was purchased from the previous owner.

One day, the body of a black man was found on the farm. Mehring was called and he in turn called the police but because it was a black man, no investigations were conducted and the body was buried on location without any fuss. But when farm got flooded after a heavy downpour, the body was uncovered and the locals on Mehring's farm offered him a befitting burial using materials they could gather or borrow. It is the appearance of the dead black man on his farm that got Mehring thinking of his own death and succession.

Mehring was rich but never happy. His wife had divorced him and lived in the US, speaking to him only through her lawyer, and his son is estranged from him because he wouldn't serve in the military and had perspectives about life different from his father's. Thus, Mehring's riches had fewer spenders. But he also had a peculiar thinking, a kind that has ravaged modern thoughts, that he could obtain everything he wants with his money, including women, sex and love. However, seeing the way the poor black folks live on his farm - and he was considered a conservationist at least by the author because he would not allow anyone to take any wild animal from the farm including eggs laid by the guinea fowls - Mehring began thinking of whom the land he farms really belong to. He also felt lonely so that at one point he had to spend his New Year with the black workers on his farm. He knew that the locals were there before the first purchase, before his predecessor and will be there when he was gone. The land will not be truly his even though he had some papers showing that he had purchased and paid for it. The people's claim to it was ancestral and their attachment to it was not cultivated but connatural.

There'll be dissatisfaction because they were here when he came, they were squatting God knows how long before he bought the place and they'll expect to have their grandchildren squatting long after he's gone. [202]

These were the kinds of thoughts and ruminations, mixed with his own mortality and death, that plagued Mehring in his daily rounds even as he travelled from Japan to South America to Jamaica and back to South Africa and to his farm, making him look like one who was less satisfied with his life than the poor folks were with their poverty. What opened up these wounds was when his workers, especially Jacobus, talk of how his son - Terry - would take over from him after he had finished his school.

With the floods, storms and the destruction of Mehring's farm, Nadine Gordimer's The Conservationist could be considered a metaphor and interpreted as the conditions that blacks found themselves in. It could also be considered as a premonition of what was to come. For instance, when the storm came, a tiny ditch carrying trickles of water, in normal rainy weather, accumulated so much water as to carry away cars driven two white South Africans:

But who could ever have imagined that the trickle of water that sometimes dried up altogether for months on end so that that gully was nothing more than a culvert full of khaki-weed and beer cartons thrown in by the blacks, the trickle of water that in normally rainy weather was never more than a gout from the big round concrete pipe that contained it under the road, could become a force to carry away a car and its occupants. [235]

In some way, these gathering floods, which forced Mehring to finally abandon his farm and emigrate to 'one of those countries white people go to', could be taken to be the political force that was gathering in apartheid South Africa in the 1960s and 1970s. With this kind of interpretation one will summarise as: the police (white) bearing the authority of the government (white) only covered the dead stranger (black) on a land inhabited by blacks but paid for by whites; but after the floods (political upheavals) the body came up and Mehring (settlers) ran away to wherever he came from in the first place and the people buried their dead because he was one of them in colour and spirit and took over their land.

Using a mix of narrative formats and deliveries, Gordimer told the story from within the mind of Mehring so that we get to know his fears, even when he was only mentally projecting or playing around with it, and his person. In effect Mehring opened up his consciousness, or the author made him to, to the reader without restriction and this is what makes the book not only an interesting read but also a difficult and discomfiting to get around, at one point reading the 'I', at another 'You', at other places the omniscient takes over. The denser and seemingly impregnable nature makes the reader uncomfortable mentally and physically, as if one is crumpling under a burden and which he cannot also set aside.

Brief Bio: Nadine Gordimer (born 20, November 1923) is a South African writer and political activist. She is the daughter of Isidore and Nan Gordimer. She has lived all her life, and continues to live, in South Africa. Gordimer's writing has long dealt with moral and racial issues, particularly apartheid in South Africa. She was active in the anti-apartheid movement, joining the African National Congress during the days when the organisation was banned. She has recently been active in HIV/AIDS causes.

As a writer she was awarded the 1991 Nobel Prize in Literature when she was recognised as a woman 'who through her magnificent epic writing has - the words of Alfred Nobel - been of very great benefit to humanity'. Her principal works include A Guest of Honour, The Conservationist, Burger's Daughter, July's People, A sport of Nature, My Son's Story, None to Accompany Me, Jump, Why Haven't you Written: Selected Stories 1950-1972, The Essential Gesture, On Mines and The Black Interpreters. (Sources: Wikipedia & Nobel Prize)
_______________
Read for the Top 100 Books Reading Challenge
Author: Nadine Gordimer Author's Country: South Africa Man Booker Book Nobel Laureate Novel Rating: 5.0 Review Year of Publication: 1971-1980