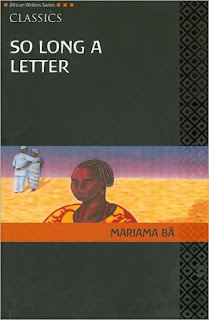 Mariama Bâ's epistolary novella, So Long a Letter, voted as one of the best African books in the twentieth Century, is a commentary on Senegal's, and by extension Africa's, patriarchal society and the role of tradition and customs in maintaining and perpetuating the status quo. To some extent, the novella also portrays certain inherent weaknesses in some women when faced with the opportunity to finally take flight. It also opens up such feminist topics as polygamy, providing a different angle to the old story from a woman's perspective. Consequently, it has been described in some quarters as the first African feminist book and the author's overt use of 'New African Woman', 'Independence', 'Liberation' and similes and metaphors of similar meanings might have spurred this explicit description.

Ramatoulaye, the protagonist, is writing to inform her childhood friend, Aissatou, of the death of her husband, Modou. The writing of the letter itself - a cascade of past pleasures and present pain collected through a selective process to assuage her present predicament - and its sharing are part of Ramatoulaye's personal therapy, regarding Aissatou as someone with whom she shares similar fate after Aissatou had gone through and come out of the other end of the mills and ills of marriage - divorce - a better woman.

As the letter unfolds we get to know the exact causes of her pains, the extent of her suffering in the last five years of marriage until Modou's eventual death and the botheration she was going through even after his death from his family members stealing the family's properties to his brother proposing marriage at his brother's funeral. Ramatoulaye's husband of twenty years (at the time) had married their daughter's best friend, Binetou, leaving her to her fate and shirking all responsibilities as a husband and a father of a dozen children. But the major question or problem Mariama Bâ tends to answer with the Ramatoulaye character was her decision to remain married to a man who had, for all intents and purposes, 'divorced' her whilst at the same time describing herself as part of the new breed of African women. Was it because she was afraid of betraying the course after rejecting her mother's choice of a husband and going ahead with her marriage to Modou, because she was a 'New African Woman', or was because of those inherent fears she hinted upon in the text?

All through the narrative, explicit statements were made about the turning away from the old patriarchal society of the West African country (and West Africa in general) to one where everyone would have equal rights and access. And Ramatoulaye was one its proponents. She was politically-aware, a working mother, and a feminist revolution advocate, rejecting all suitors during and after he husband's funeral, including her Modou's elder brother. Yet, some of her decisions seemed to run counter to her preach. For instance, though she argued against the all-male National Assembly she would not enter politics. But most importantly, it was her stated reasons for not divorcing her husband which are difficult to accept:

Leave? Start again at zero, after living twenty-five years with one man, after having borne twelve children? Did I have enough energy to bar alone the weight of responsibility, which was both moral and material? [41]

And as a show of solidarity with Aissatou, she says:

Even though I understand your stand, even though I respect the choice of liberated women, I have never conceived happiness outside marriage. [58]

Yet, Ramatoulaye brought up her children liberally; making them choose their own husbands and throwing some part of her people's culture - both behavioural and institutional - away and setting her children up for the consequences of her decisions. Daba, the first child and former best friend of her father's new bride, was to build upon her mother's legacy. Her vision of marriage was totally different from that of her mother. She saw marriage as a

[M]utual agreement over a life's programme. So if one of the partners is no longer satisfied with the union, why should he remain? ... The wife can take the initiative to make the break. [77]

Whilst Daba was absorbing her mother's experiences and training and turning them into her own life philosophies, her other sisters were trailing other paths. Even then, Ramatoulaye would not resort to the 'normal' modes of correction. Especially when Aissatou (not the recipient of the letter) got pregnant she accepted the man responsible instead of reprimanding her, as suggested by her neighbour. Her focus to stay the course was once again threatened when she caught her twin daughters smoking in their room, after she had decided not to invade their privacy. And for those Western culture she did not agree with (such as the kind of fashion that was in vogue at the time), she was made to accept them, so that in someway her evolution was aided  by her children:

I considered the wearing of trousers dreadful in view of our build, which is not that of slim Western women. Trousers accentuate the ample figure of the black woman and further emphasize the curve of the small of the back. But I gave in to the rush towards this fashion, which constricted and hampered instead of liberating. [80]

Was the use of 'constricted' four words away from 'liberating' - and in the same descriptive sentence - symbolical? Could this be interpreted as a warning against absolute cultural osmosis instead of selective cultural borrowing?

Another point of note is that even though the women in Mariama Bâ's story were Muslims they were all against polygamy. Regarding Ramatoulaye, one finds it difficult if it was the second marriage that made her bitter or her husband's treatment. In all three scenarios of polygamy (Ramatoulaye and Modou; Aissatou and Mawdo; and Jacqueline and Samba Diack) the husband's treatment of the first wives, after taking on another wife, was appalling resulting in emotional distress, divorce and nervous breakdown and subsequent death, respectively, for all the women involved.

Using climatic and geological metaphors that rings of 'tropical storms' and 'earthquake' respectively, Ramatoulaye provided a fitting end to her final transformation when she confirmed that she is not

[I]ndifferent to the irreversible currents of women's liberation that are lashing the world. This commotion that is shaking up every aspect of our lives reveals and illustrates our abilities. [93]

empahsising again the equality between the two genders. This statement defines or summarises all the major issues Ramatoulaye discussed in her letter.

Finally, like most stories written from the first person perspective, there were several events that she definitely couldn't have known had she not been told by another but no such claims were made. Again I find the description of another character's emotion by a protagonist in a 'first-person' narrative very difficult to believe, if not handled properly. However, all in all this was an interesting story and one I enjoyed reading.
___________________

Brief Bio:  Mariama Bâ (1929–1981) was born into a well-to-do family in Dakar, where she grew up. In the newly independent Senegal, Bâ's father became one of the first ministers of state. After Bâ's mother died, she was raised in the traditional manner by her maternal grandparents. Her early education she received in French, while at the same time attending Koranic school. At school Bâ was a prominent student. During the colonial period and later, girls faced a number of obstacles when they wanted to have a higher education. Bâ's grandparents did not plan to educate her beyond primary school, but her father's insistence on giving her an opportunity to continue her studies eventually prevailed. She won the first prize in the entrance examination and entered the Ecole Normale de Rufisque, a teacher training college near Dakar. During this period she published her first book. It was non-fiction and dealt with colonial education in Senegal. At school she also wrote an essay, which created a stir for its rejection of French policies in Africa. However, later in life Bâ recalled her experience with the French colonial educational system in a positive way. Bâ married a Senegalese member of Parliament, Obèye Diop, but divorced him and was left to care for their nine children. (Source)
____________________
*The last book read in 2011
Author: Mariama Ba Author's Country: Senegal Novella Rating: 4.0 Review Translation Year of Publication: 1971-1980