84. A Sense of Savannah: Tales of a Friendly Walk through Northern Ghana by Kofi Akpabli 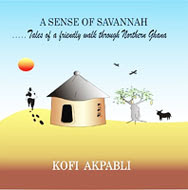 At a time when local tourism has been reduced to annual school excursions to manufacturing plants in Accra and Tema, Kofi Akpabli has opened to the general Ghanaian public and the world at large the beauty locked within a place that's hardly ever travelled to by most Ghanaians, the northern regions comprising Northern Region, Upper East Region and Upper West Region. In this tour-guide cum travelogue, Kofi Akpabli documents his personal experience of travelling to these seemingly remote places in Ghana, mixing his experience with facts. The results of which is a well-crafted book that points to beautiful tourist destinations and the excellent human relations exuded by the people he met.

In A Sense of Savannah Kofi tried to present to us a different narrative, one that those who have never travelled to these regions and whose perspective of that part of Ghana is shaped and reshaped anytime news of conflicts jumped out of their ghetto blasters. And this Kofi succeeded to such an extent that even we who are fortunate enough to have visited the area seem to revisit and live it all over again.

Written in a humourous style, making sure that every sentence makes you 'emit loud, embarassing laughs' Kofi takes us on a mental journey through northern Ghana so that from his clear and imagistic narrative we forget that it is only a mental journey and that we are where we were when the book was opened for reading. From "Way West to Wechiau" to "A Pilgrimage to Paga" we travel with Kofi as he explores the beautiful landscapes of the region. In the former he tells us the class of animals hippos belong to and why they 'sweat' oil. He also never forgot to mention of the birds whose songs he heard on the serene Black Volta, whilst pointing out how those imaginary international boundaries/borders dissolve into nothingness when you live in these places; how the locals have come to live in close proximity with these 4,000kg 'wild' animals and yet have not feasted on them; how he was afraid and his reaction when he saw a family of hippos.

...the hippo is among the most dangerous and aggressive of all animals. It is considered Africa's most dangerous. When you put a bullet through it, for instance, you must be prepared to chase miles after it before you can get its body (that is, if it falls at all). As a hippo's anger grows it keeps 'yawning' and then, shows its big teeth. A hippo's jaws are capable of biting a 10-foot crocodile into two. Any question?

It is facts such as these mixed with the author's personal experience of the animals and the place he visited that makes A Sense of Savannah a very unique book worth having.

Unlike those Naipaulic and Conradic tales and those commercialised tales and stories told about Africa where all that's narrated are the Safari with its wild lions and elephants and how the writer almost fell into a ditch but for his or her determination to survive would have been chewed by a lion, Kofi in this travelogue cum tour-book described the warmness of the people of the north. He never entered there with a prejudiced mind. He entered there with a mind so open that he saw the little things that makes the north tick, like market days which fall on Sundays called 'Sunday High'. So that we celebrate Christmas with the people in "Christmas in Hamile" and Valentine in "A Savannah Valentine". In "Bawku the Beautiful" the author writes as a prologue to the chapter:

The indifference of New York

The business savvy of Kumasi

The ethnic diversity of Nima

Bawku, Beauty is thy name

Invitation to pito - locally brewed beer - drinking was abundant and with the right attitude friends are easily made. The successes of the people and their challenges are presented in equal measure. In "Sirigu Success Story" we meet a wonderful woman Madam Melanie Kasise who on reaching retirement age refused to bend to the dictates of old age but gathered the women in her community, Sirigu, to form the Sirigu Women Organisation for Pottery and Art (SWOPA). So famous is the success of this 300-women organisation that the former United Nations General Secretary, Kofi Annan, visited them, where his bust still stands today.

Making nonsense of the prejudicial, parochial, single-story narratives about Africa that have pervaded every media outlet, Kofi with this book has provided a fresh alternative narrative about these places in Ghana and, perhaps if one is quick enough to apply this to other places, in Africa as a whole. For those who love to travel or to read about places, those who seek to understand a people from the people's own perspective and not buying into the usual stereotypic narrative by those whose philosophy in life is 'if it is not like mine, it isn't worth it', if you are one of those then this book is for you. However, if you are not tired of reading the single-story of Africa, its backwaters, its mountainous problems, and the zombies who inhabit the place, if this is your ideal fantasy novel or book, then stay clear off this book. It isn't for you.

For those who would purchase this book, be very careful before you read, especially "Bolgatanga to Kumasi by GPRTU" and "Kumasi to Bolgatanga by GPRTU (State of Emergency)", for there is a caution at the back, which reads:

For fear of emitting loud, embarrassing laughs do not read this book in public 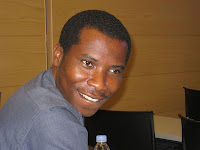 Brief Bio: Kofi Akpabli is a communication professional and a journalist whose special interests are triangled between tourism, culture and the environment. Whether he is covering a 9/11 memorial on Ground Zero in New York or discovering traditional taboos in Ghana's Upper West Region, human interest is ever his soft spot. Happily as he uncovers the intrigues of the human situation, humour never seems to leave him alone. (Source)

In April 2010 Kofi Akpabli was nominated as a finalist in the CNN/Multichoice African  Journalist Awards Programme. He won the best journalist in the Arts and Culture category with his piece The Serious Business of Soup in Ghana. He again won this award in the same category last Saturday, June 25 2011, with his article What is right with Akpeteshie. The citation following Mr. Akpabli’s award read:

“Kofi Akpabli’s story uses the most enriching and fantastic language to explain why Akpeteshie, a local brew, is the equivalent of a liquid national heritage. Kofi not only educates and enlightens us to the history and best practices of this national beverage – but he also does it with humour and style. A worthy return winner.” (Source)