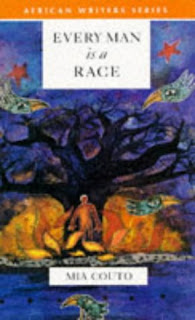 Asked what his race was, he replied

'My race is me, John the Birdman.'

Invited to explain himself, he added:

'My race is me myself. A person is an individual humanity. Every man is a race, Officer.'

(Extract from the bird seller's statement)

Every Man is a Race is the second collection of short stories by Mia Couto. It is this collection that established Couto as master storyteller. His stories are known for being magical and surreal. It's always difficult to directly interpret Couto's story. The symbolism is heavy.

Consisting of 18 short stories, Every Man is a Race follows the path of Voices Made Night in style, structure and theme. Couto has a way with words. He makes them come alive. Using little dialogue, Couto tells the story as we have known it told since childhood, when we gathered by the fireside sharing stories among ourselves. His themes ranges from love to politics.

In the fearful love-life of Rosa Caramela in Rosa Caramela, the first story, Couto tells of a hunchback who after having been disappointed by his lover was taken for madness. It is one piece whose understanding only comes at the end. The Russian princess  is about a Russian lady married to a Russian miner, a man she doesn't love, in the town of Manica. Prevented from going out she knows little of what goes on around her and about the slave labour used by her husband at the mines. When once she went out to witness the living conditions of the 'slaves', she was put under heavy surveillance; when she heard of another accident at the mines, her depression spiralled into insanity. This epistolary story was written by the 'boss boy' addressing God to forgive him of his sins, after the princess - Nadia - died in his arms and he ran away. The Blind Fisherman  is a story about a man's chauvinism and a woman's patience in the face of hopelessness.

The legend of the foreigner's bride falls under the magical tales of Couto. And so too does The rise of Joao Bate-Certo. Yet the images within the lines of these stories could all be symbols indicating something more real and earthly. In the latter story, a boy who is fascinated by the city and who hungers for its visions of concrete and tall buildings decided to build a tall ladder on which he would satisfy this hunger. This simple is a story of hope and visions.

The Swapped Medals and The flagpoles of Beyondwards are some of the stories with political undertones. And even in the latter, the relationship between whites (the bosses and masters) and blacks (the slaves and servants) were explored as it has been explored in most of Couto's short stories. His African sensibilities are very acute. So too are his political ones. For whereas people see freedom, Couto sees enslavement. In Flagpoles of Beyondwards, Couto writes:

'Listen, Joao. I always have this doubt in me: now I'm a white man's servant. What will become of me after?'

'After, there will be freedom, Father.'

'Nonsense, son. After, we'll be servants to those soldiers. You don't know about life, my boy. These gunfire folk, come the end of the war, they won't be able to get used to doing anything else. Their hoe is a musket.'

Treating human nature and politics would not be complete without talking about those pretentious freedom fighters whose only reason for fighting is to become the very people they are fighting against. In Whites Couto brings this to the fore. Before a seminar organised to to discuss the African authenticity, where 'relevancies and eloquences' had been exchanged, a black man, Carlito Jonas, and his goat, Zequinha Buzi, suddenly appeared. Carlito, who represents the bourgeoisie, told the gathered elite:

you're whites in disguise, you're pretending to be my race, you're just making fools of us folks, I, who you can see in front of you, I'm not scared of anyone, I'm no milksop, I'm going to complain about you, let's go, Zequinha, let's go and denounce these goings on.

This speech reminds of a statement in Ngugi's Weep not Child 'blackness alone does not make a man'. Thus, comprehensively, this collection of short stories defines and describes, in equal measure, the human 'condition'. What people really are and the relationship structure that exists between the rich or elite and the poor or the masses, irrespective of the colour of the skin.

Mia Couto is a master storyteller and he draws more from his Lusophonic background to flavour his stories. Even those that are difficult to breakdown still grabs the reader's attention. This collection is recommended to all.
______________________________
Brief Bio: Click here